'We looked over at the cot and Daisy wasn't in it': Radio star Fifi Box, 42, says her daughter Trixie, 6, has taken a 'very hands on' role as a proud big sister to her newborn sibling

And after allowing her daughter Trixie, 6, to name the newborn, Fifi says the little girl has become very 'hands on' with the baby.

Speaking to Channel Ten's The Project via a phone call on Wednesday, Fifi said: 'We looked over at the cot and Daisy wasn't in it. And Trixie just walked off with her.' 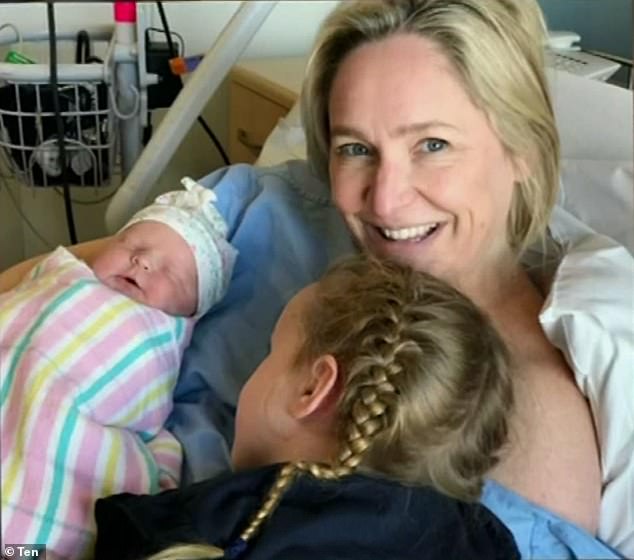 'I'm in heavenly bliss': Radio star Fifi Box, 42, has gushed over motherhood since giving birth to daughter Daisy on Wednesday night's The Project

'Trixie is loving it. She's very hands on. I kid you not. When Daisy was delivered, it took me two hours to get her back off Trixie,' proud mother Fifi said.

She went on to say adorable Trixie has decided that Daisy is 'her baby'.

'She decided she's her baby. So I missed out on some quality bonding time [after she took her for two hours]. She is very good,' Fifi added.

The TV presenter went on to say a hilarious anecdotal story about how Trixie 'walked off' with her younger sister while Fifi's parents were visiting.

'I won't lie though. I was having a chat with my mum