It's been a worrying few months for Tziporah Malkah, who has been visited by police and ambulance crews at her Sydney apartment on several occasions recently.

But despite fears for her well-being, the 46-year-old former model appeared to be in a cheerful mood on Monday as she went for a swim at Bondi Beach.

Tziporah, previously known as Kate Fischer, showed off her recent 50kg weight loss in a black bikini, after undergoing a tummy tuck procedure earlier in 2019. 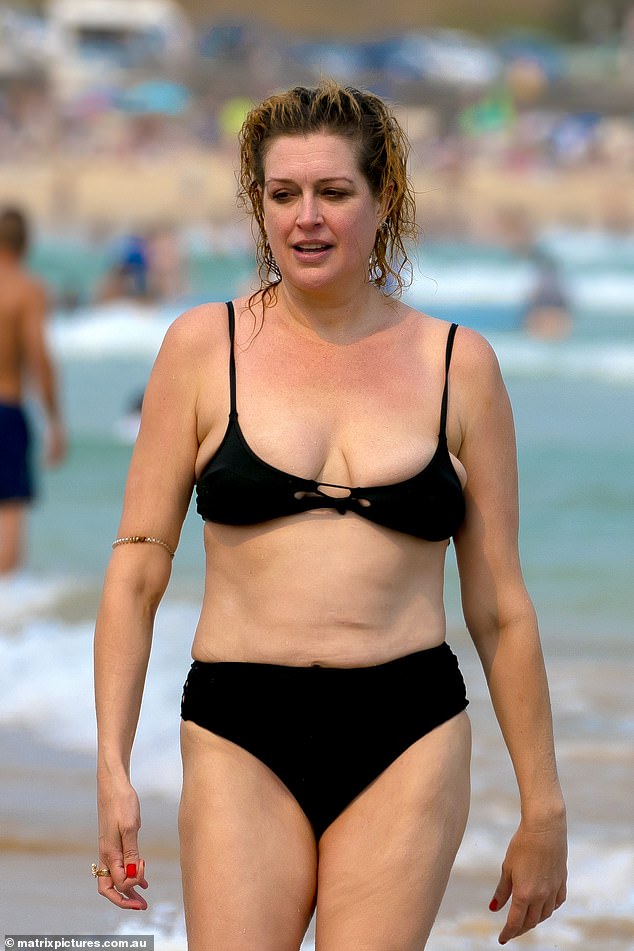 No worries! Despite fears for her well-being, Tziporah Malkah appeared to be in a cheerful mood on Monday as she went for a swim at Sydney's Bondi Beach

The Sirens actress was joined by a female friend as she strolled down the beach, caught waves and shared plenty of laughs.

At one stage she was spotted holding hands with her female companion, who wore a white singlet and colourful shorts.

Coincidentally, she was just a stone's throw away from the Bondi apartment she once shared with ex-fiancé James Packer in the late '90s.

Her relationship with the 52-year-old billionaire was thrust back into the spotlight last month, when she made bizarre claims about his late father, Kerry Packer.

Tziporah told The Weekend Australian she had 'intense' sexual chemistry with the media mogul, who died at the age of 68 in December 2005.

'Kerry wanted me and I wanted him too. He was 6'1'' and his hands were massive, of course, and he had these penetrating eyes,' she said.

'He was amazing and I loved him. We engaged each other

PREV Janet Jackson is dressed head to toe in black as she arrives at JFK Airport in ...
NEXT Sofia Richie and Scott Disick bundle up for some shopping in Aspen