Being dead is difficult. Ask any actor. It takes patience and concentration to lie on a stage, trying not to breathe or twitch or double up with cramp, and praying that the leading lady won’t tread on your fingers.

Being dead on TV can be even more difficult. You’re on a mortuary table, probably naked (obligatory if you’re female), with your bum being frozen by the metal and your face cooked by studio lights.

And if you’re a corpse on Silent Witness (BBC1), it’s worse: you’ve got pathologist extraordinaire Dr Nikki Alexander (Emilia Fox) performing a slow circuit of your extremities, listing clues into a dictaphone that sound something like: ‘Sub-haematomal glottalectomy scarring evident . . . some suprahumeral anthro dialysis, and . . . hmm, a tattoo in the armpit that I’ve only ever seen on inmates of Belarusian jails.’ 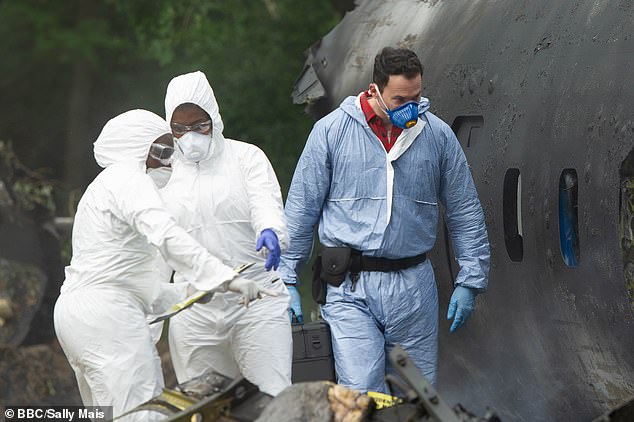 Bodies were plentiful in this episode, the first of a two-parter that continues tonight

Try listening to that lot without suffering a fit of the giggles.

One unlucky extra was doing his mortal best to be dead as the show returned for what is, remarkably, its 24th year. His character was a Far Right nationalist, who had taken it upon himself to improve the purity of the race by shooting himself through the head.

He sat slumped in a revolving chair, neck arched back. Dr Nikki’s boss, Tom Manly-Squarejaw, stood over him, trying to spot clues but failing to notice the pulse that throbbed in the deceased fellow’s throat. No amount of acting can hide that, though a cravat might.

Bodies were plentiful in this episode, the first of a two-parter that continues tonight. A private jet had crashed in a field conveniently close to Dr Nikki’s morgue — plummeting from three miles up and breaking into five neat chunks, like a frog dissected

PREV Bachelor In Paradise alum Dean Unglert shares details of nasty ski accident in ...
NEXT Sofia Richie and Scott Disick bundle up for some shopping in Aspen