Revealed: The luxury 'contraband' items I'm a Celebrity campmates snuck into the jungle - as producers force them to hand EVERYTHING over

Channel 10 bosses are not going easy on this year's jungle campmates.

During Wednesday's episode of I'm A Celebrity... Get Me Out Of Here! Australia, all of the cast were forced to hand over the contraband items they'd snuck into camp.

Stars such as Charlotte Crosby and Miguel Maestre surrendered their secret stashes, in exchange for all of the group receiving their approved single luxury item each. 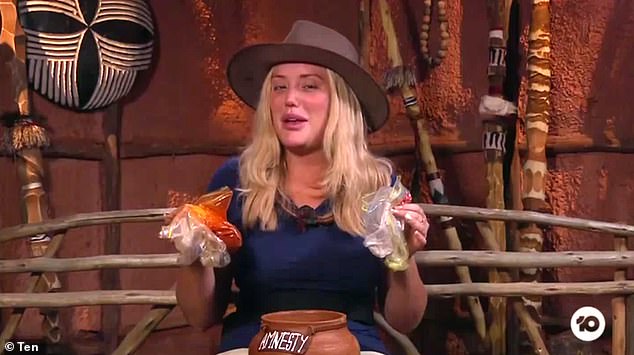 Hand it over! I'm A Celebrity... Get Me Out Of Here! bosses forced campmates to hand over the contraband items they'd snuck into camp on Wednesday. Pictured: Charlotte Crosby

After first being informed by retired AFL star Dale Thomas that all of the cast had to place their contraband into an 'amnesty bin', there was a mixed response.

However, when it was revealed that in doing so, each cast member would receive the single luxury item they had approved before filming, they finally agreed.

PREV Kristin Cavallari puts her best foot forward as she rocks statement plaid ...
NEXT Sofia Richie and Scott Disick bundle up for some shopping in Aspen