The American Idol alum, 37, and the So What singer, 40, exchanged a few tweets on Twitter on Sunday evening about aging.

'I'm fortunate because I've never really depended on my looks. I've decided that my talent and my individuality is far more important than my face,' Pink said on her Twitter. 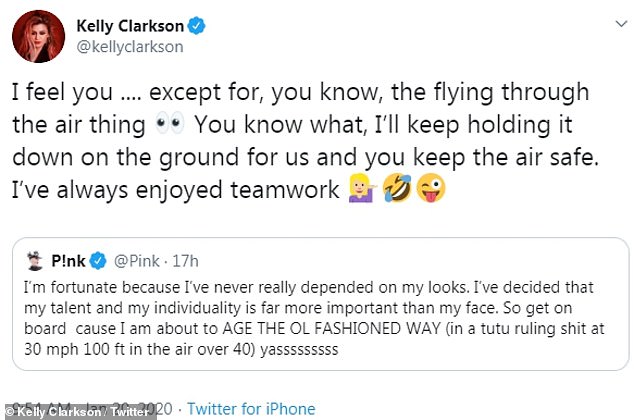 Coming together: After Pink tweeted that she wants to age the 'ol fashioned way' good pal Kelly Clarkson responded saying that she agrees

'I feel you …. except for, you know, the flying through the air thing,' Kelly said while retweeting the fellow singer's previous tweet.

'You know what, I'll keep holding it down on the ground for us and you keep the air safe. I've always enjoyed teamwork.'

Recently, the singer has been vocal about her love for Pink over the years calling herself a 'huge Pink fan' during her show, The Kelly Clarkson Show, where she even performed the