Holly Willoughby and Phillip Schofield collapse in uncontrollable laughter as pensioner, 80, gets VERY candid about her sex life with 35-year-old toyboy

After 10 years of hosting This Morning together, there isn't much that can faze them.

Yet Holly Willoughby and Phillip Schofield were left incredibly red-faced during Tuesday's show, as they spoke with a very forthcoming pensioner.

In a segment titled, My Egyptian toyboy isn't after my money, the hosts chatted to Iris Jones, 80, who struck up a relationship with Mohamed Ahmed Irbriham, 35, after meeting on a Facebook group. 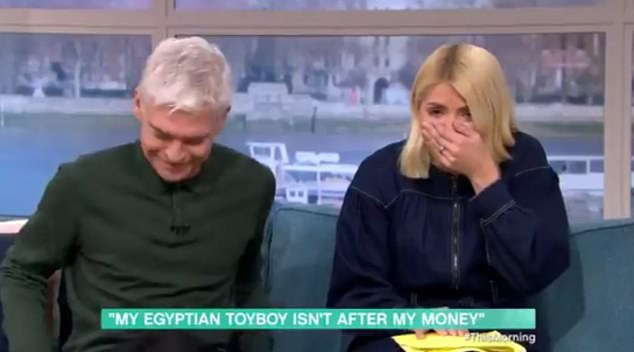 Quizzing the pensioner about her bedroom antics, the pair weren't prepared for how forthcoming Iris would be, immediately collapsing in giggles as she exclaimed: 'The first night was pretty rough.

'Nobody had been near me for 35 years, I thought I was a virgin again!'

As Phil, 57,  held his head in his hands, Iris continued: 'Can I tell you what we used? A whole tube of KY jelly'

Iris , from Weston-super-Mare, Somerset, first struck up a conversation with Mohamed, last summer on a Facebook group exploring