She is currently making her way across the UK on tour with Mario and Ginuwine.

And British Fans no doubt got a real sense of nostalgia, as the US singer, 39, stormed the stage at Hammersmith Apollo in London on Friday night.

Ashanti, who is famed for hits such as Foolish, Happy and Rock Wit U, sizzled for her latest performance that saw her slip into a flame-printed statement blazer and hotpants and knee-high leather boots. 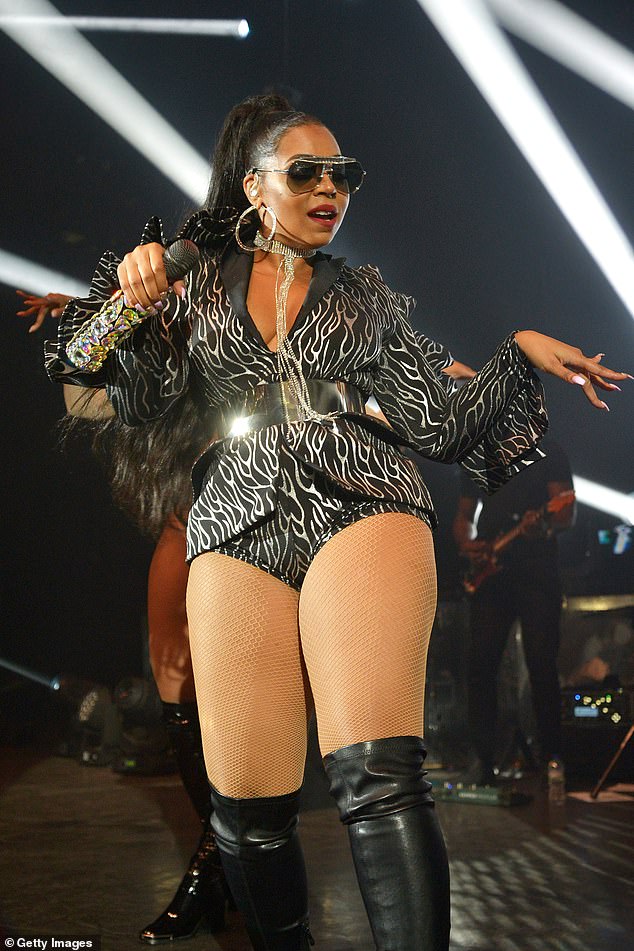 Blast from the past: Ashanti, 39, stormed the stage at Hammersmith Apollo in London on Friday night in leather knee-high boots and shades

Showcasing her vocal talents, Ashanti was seen twerking on stage in her revealing getup that left little to the imagination.

She paired together a fitted blazer, that boasted statement ruffled sleeves and silver detailing, with a metallic belt and matching hotpants.

Ashanti wore nude fishnet tights underneath and strutted her way across the stage in a pair of knee-high leather boots and blinged out aviator shades. 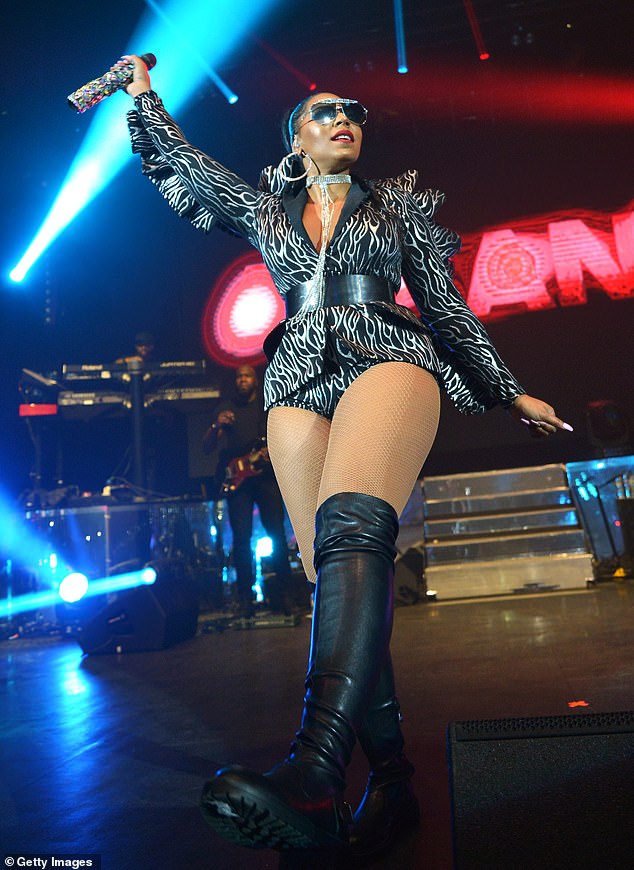 Fierce: The singer, who is famed for hits such as Foolish, Happy and Rock Wit U, sizzled for her latest performance in a flame-printed statement blazer and hotpants 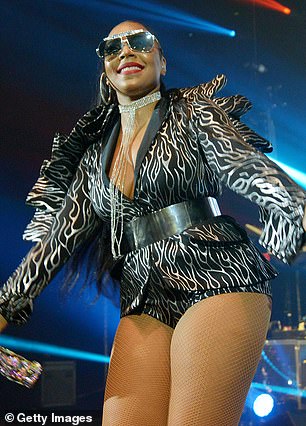 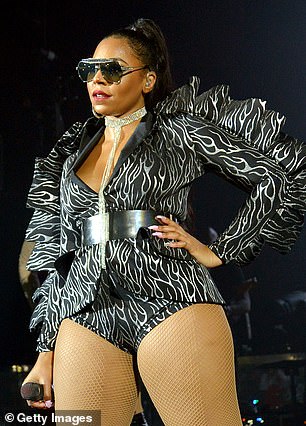 Edgy: Ashanti's fitted blazer boasted statement ruffled sleeves and silver detailing and came complete with a metallic belt that cinched in at the waist 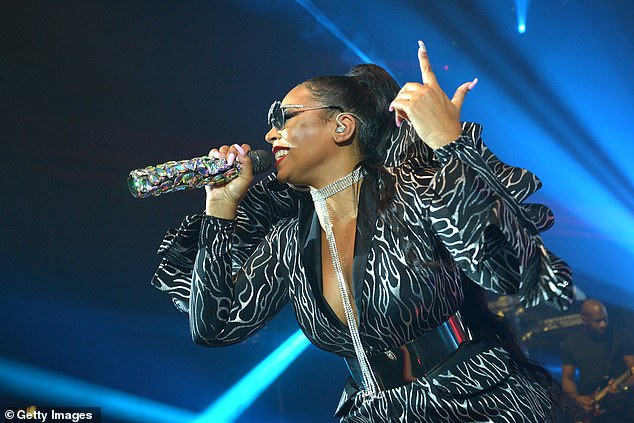 Stand-out: Wearing a diamante choker around her neck and one hoop earring, she finished off her stage getup with a bold red lip 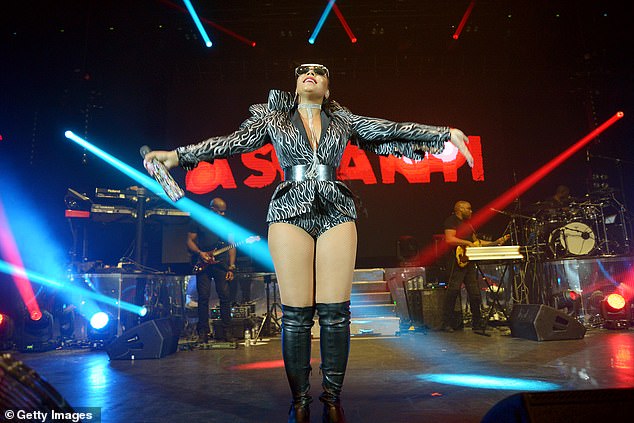 Loving it: Ashanti looked pretty content back up on stage as she delivered her hits

Wearing a diamante choker around her neck and one hoop earring, she finished off her stage getup with a bold red lip and a sleek high ponytail that saw her locks styled into huge curls.

The R&B and hip-hop artist was supported by dancers on stage and put on an animated display as she twerked on stage and gestured out towards the crowd.

Ashanti, who was signed to Murder Inc back in 2002 and worked with the likes of Ja Rule and Fat Joe, was joined by Let Me Love You hit-maker Mario and Ginuwine - who is famed for his 1996 track that has become an anthem for Channing Tatum's movie and live show Magic Mike. 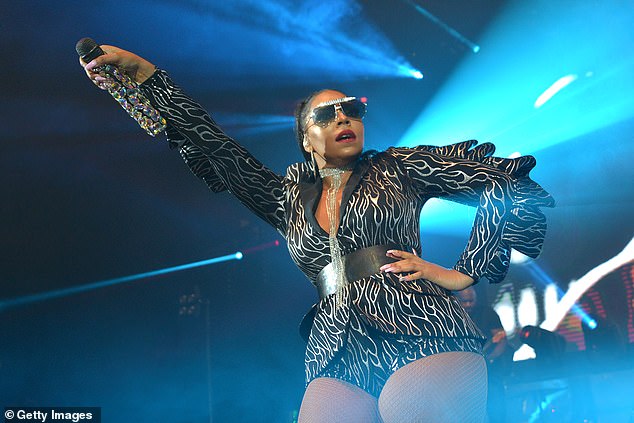 Now you sing: The star was seen gesturing to the crowd with her microphone mid-song 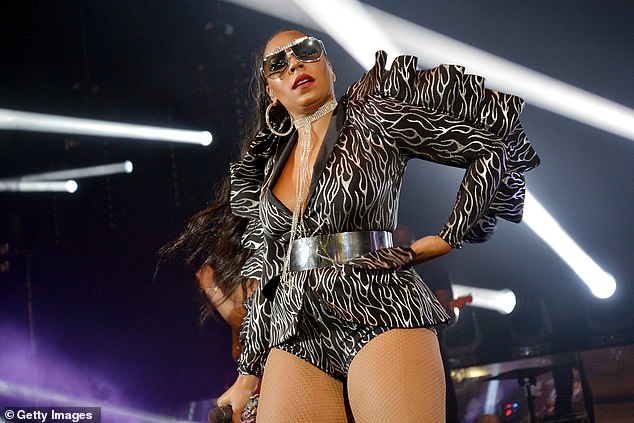 Boss lady: Ashanti meant business in her fierce getup and blinged out sunglasses 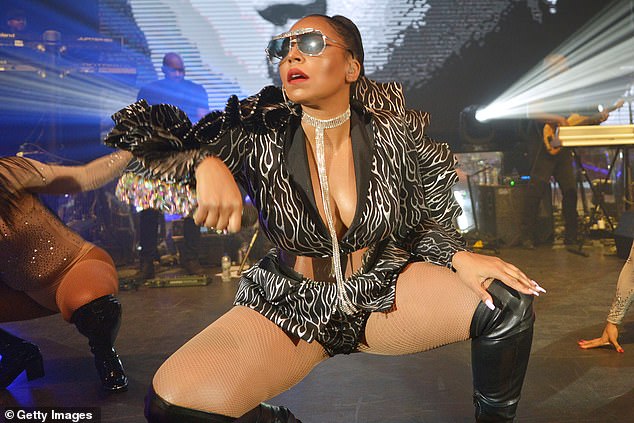 She means business: The star gave it her all as she put on an energetic performance

She is set to head up and down the country, hitting venues in Manchester, Birmingham and Leeds in the next few weeks, before heading to Nottingham and Glasgow.

Ashanti will wrap things up on her return to Bimingham on 9 February and is then set to head back to the US for shows in Salt Lake City at the end of February and Las Vegas in May.

Appearing on Good Morning Britain on Friday, ahead of her

PREV Joe Jonas puts on an animated display as he takes to the stage with Nick and ...
NEXT Love Island CONFIRMS the return of Casa Amor