'That's the one thing we agree on': Allison Langdon reveals the secret rule she made with Karl Stefanovic to make Today a success

The Today show's Allison Langdon has revealed the one rule that she and her co-host Karl Stefanovic are following to try and make the breakfast program a ratings hit.

Speaking to Sunday Life, the 40-year-old explained that the pair are ignoring critics, and just focused on making Today as 'fun' as possible for viewers each morning.

'[Karl] is the first to admit he'd fallen out of love with morning TV and that's the one thing we agree on - it has to be fun,' said Ally of Karl's return to Today, after he was axed for 12-months in December 2018, and replaced by Deborah Knight. 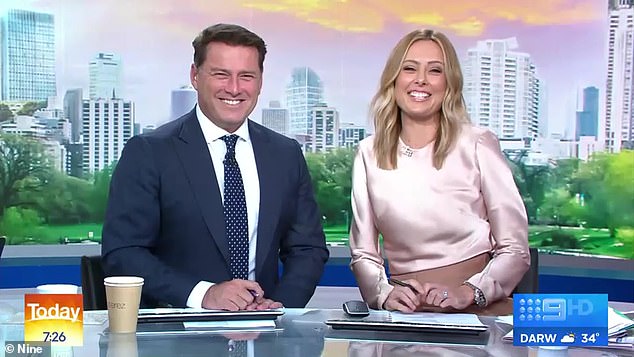 'It's the one thing we agree on': Today's Allison Langdon (R) has revealed the one rule and co-host Karl Stefanovic (L) are following in an attempt to make the breakfast program a ratings hit

'He's come back with a renewed passion and the Karl I'm seeing now is positive and engaged. I adore working with him,' continued Ally, adding she's 'protective' of him.

'All we can do is make sure we're putting together the best show we can each morning.'

Karl and Ally made their debut on Today in early January, replacing former hosts Deborah and Georgie Gardner, and have slowly