She is known for her high intellect and hourglass curves.

And Carol Vorderman battled the elements as she presented her BBC radio show from Cardiff city centre on Saturday.

The broadcaster, 59, wrapped up for the frosty weather as she sported a camo padded with a faux fur hood along with blue skinny jeans. 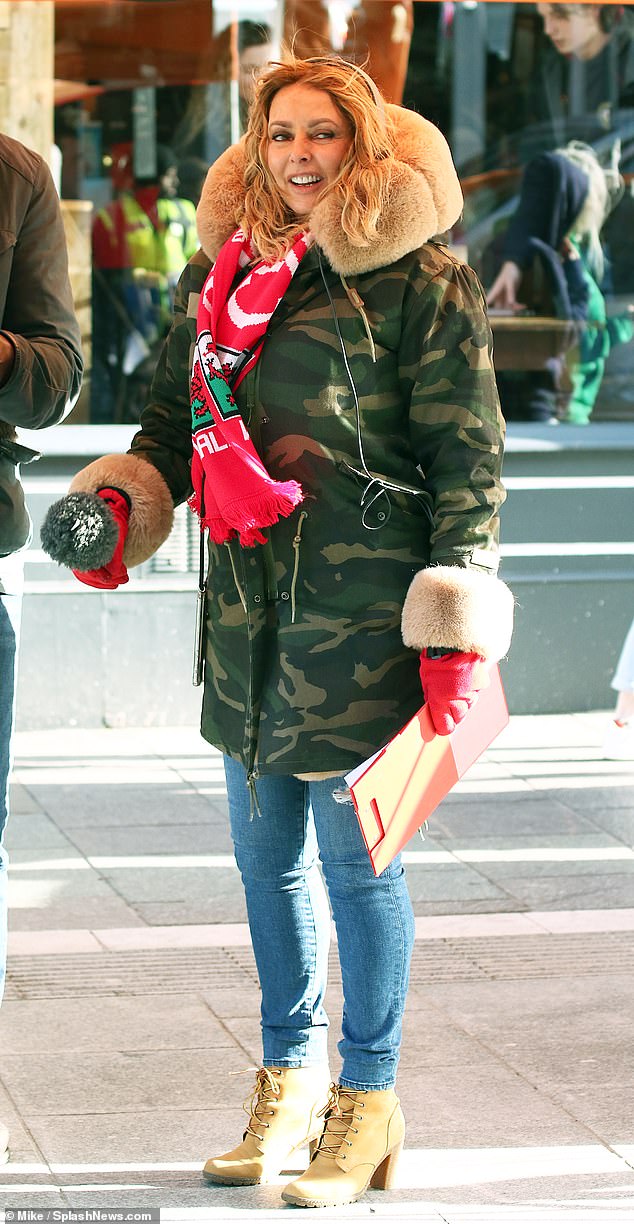 Out and about: Carol Vorderman, 59, battled the elements as she presented her BBC radio show from Cardiff city centre on Saturday

Adding height to her frame with a pair of gold ankle boots, the Countdown star wrapped up further with a Wales scarf and red gloves.

Looking in good spirits as she got to work, Carol also carried a large black handbag with her for the day.

Letting her blonde locks fall loose down her shoulders, the TV presenter chatted with her co-workers as she presented in the windy outdoors.

It comes after Carol made her debut as a weather girl on TV in Wales, reciting the full broadcast in fluent Welsh. 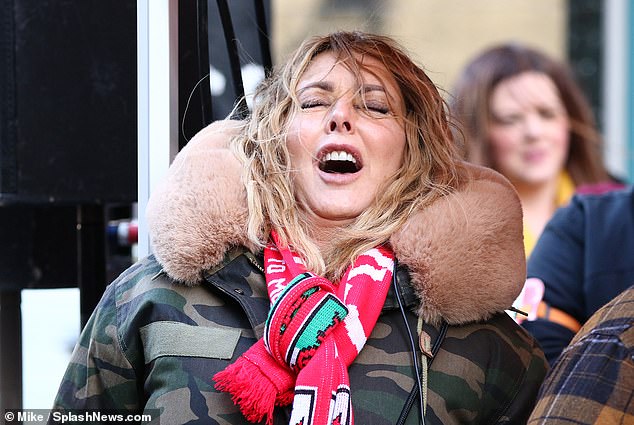 Windy: Carol battled the elements during the day out as she wrapped up for the frosty weather

Appearing on S4C on Monday, the mathematician - who was raised in Prestatyn, North Wales - revealed she has only been learning the language for two months.

She tweeted about the appearance, posting: 'Watch me being a weather woman today IN WELSH... been learning language for nearly 2 months now online with @aranjones @DailyWelshWords.'

Having tagged linguist Aran Jones in the post, he commented: 'Proud of how much effort and energy and passion Carol's thrown into it, certainly.'

She rounded off her day by posting: 'Nos da cariad. Good night cariad!' 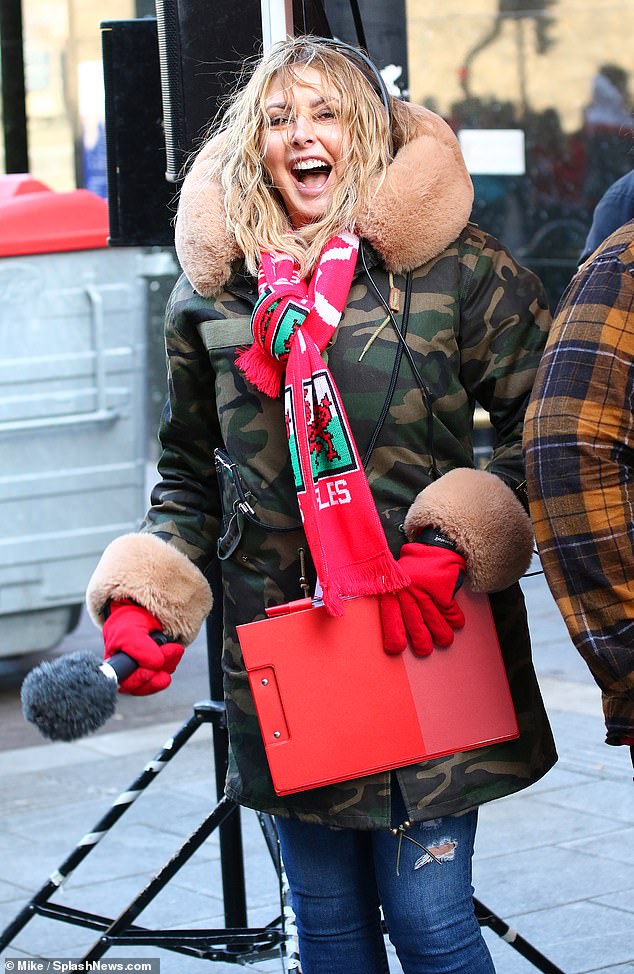 Outfit: The broadcaster sported a camo parka with a faux fur hood along with blue skinny jeans 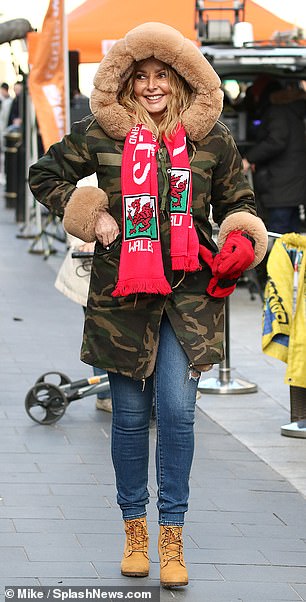 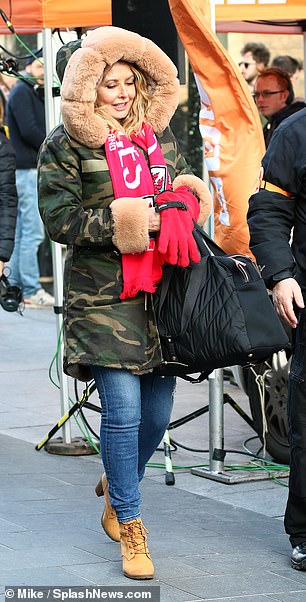 Ensemble: Adding height to her frame with a pair of gold ankle boots, the Countdown star wrapped up further with a Wales scarf and red gloves 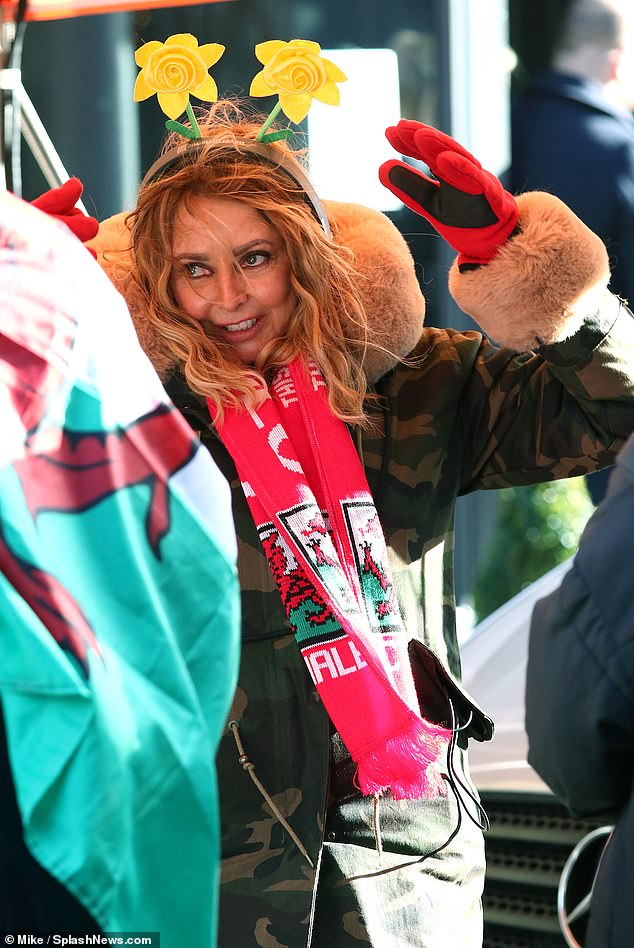 Fun: Feeling playful, Carol donned a dandelion headband as she enjoyed presenting her show in the outdoors

During the forecast, Carol slid in a nod to The Fast Show weather sketch from the 1990s, in which the late Caroline Aherne presented a faux-Mediterranean meteorology report as Poula Fisch.

The sketch saw the comedienne reporting a temperature for all locations of 45°C, simply stating that the weather would be 'Scorchio!'