'That's what he does. It's not insulting!' KIIS FM's Kyle And Jackie O slam 'easily offended' fans for 'over-reacting' to Jim Carrey's joke about Margot Robbie

Jim Carrey was blasted for a joke he made about Margot Robbie's good looks while on Friday's edition of The Graham Norton Show.

But Australian radio duo Kyle Sandilands and Jackie 'O' Henderson have hit back at outraged fans, claiming they are 'over reacting' and lack a sense of humour.

'That's Jim Carrey being complimentary and joking, that's what he does. That's not insulting!' the KIIS FM hosts agreed on Monday morning's show. 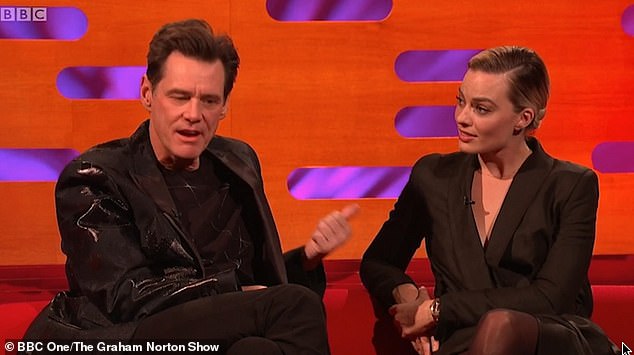 'That's what he does. It's not insulting!' KIIS FM's Kyle And Jackie O slam fans 'over-reacting' to Jim Carrey's joke about Margot Robbie on Friday's The Graham Norton Show

The American actor, 58, was branded 'rude' when he joked that Margot, 29, had a successful Hollywood career thanks to her appearance.

'It’s incredible that you’ve got as far as you have with your obvious physical disadvantages... It's unbelievable, it’s really something. That's pure talent right there!' he joked during the British talk show.

Margot appeared to take the joke in good humour as she laughed at the quip Jim had made, but viewers were not as convinced as they branded the interaction 'awkward' and 'creepy'.