Claire Danes says it's 'so hot' watching husband Hugh Dancy in Homeland... as she promotes final season of show

She's got one final season of Homeland to promote.

And Claire Danes didn't disappoint as she hit the New York streets early morning Monday to promote the eighth and final season of the show - in which she plays lead character Carrie Matheson.

Looking her business-like best in a check full-length skirt, with chic one-button grey coat on top, Claire carried an alligator-style handbag as she strode into CBS Studios.

The 40-year-old has finished filming on her Showtime show, which she has starred on since 2011, winning two Emmys and two Golden Globes for her work. 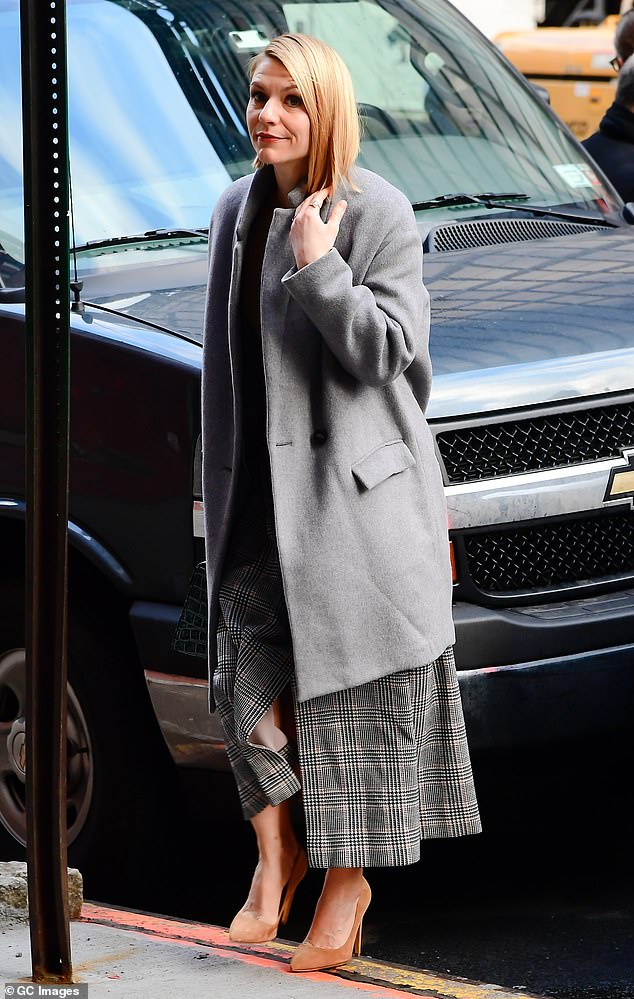 Out and about: Claire Danes says it's 'so hot' watching husband Hugh Dancy in Homeland... as she promotes final season of show in New York on Monday

Talking to CBS on Monday she said it was hard to see the end of the show.

'It's a lot of feelings, it's been almost a decade of my life. I was barely married when we started. Now we have two kids who we've dragged all over the planet as we've filmed this thing. But it's been just a wonderful gig, it's been lifechanging.'

Talking of family life, the 40-year-old actress' spouse Hugh Dancy will join her on screen. Though they didn't share any scenes together, Claire used to go in on her day off because she loves watching her husband work.

'My baby daddy!' she joked on Monday, referring to their two children, sons Cyrus, seven, and Rowan, 17 months.

Production on CBS show 'Amazing Race' suspended due to coronavirus