Do ya think I'm blonder? Rod Stewart spends nearly THREE HOURS in a hair salon only to emerge from the Mayfair hairdresser looking virtually the same Sir Rod Stewart spent almost three hours in high-end salon in London's Mayfair The singer stepped out sporting the same hair style – only slightly blonder But wife Penny Lancaster appeared to give up on his lengthy pampering session She decided to go shopping and spent nearly an hour inside an Apple store

By Emma Powell Showbusiness Correspondent For The Daily Mail

He is almost as renowned for his mop of spiky blond hair as he is for his raspy singing voice.

And Sir Rod Stewart certainly makes an effort to maintain his locks, spending up to £6,000 a year on his famous mane.

The Da Ya Think I’m Sexy singer, 75, spent three hours having his hair done – only to emerge looking virtually the same. 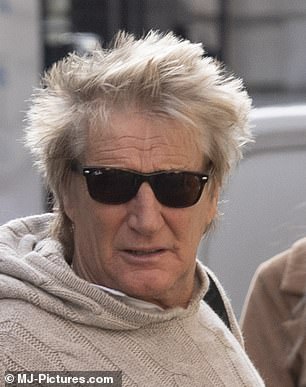 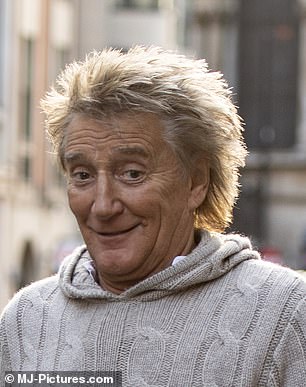 Arriving at 1.20pm, Rod Stewart enters salon in sunglasses and emerges at 4.10pm with slightly blonder hair. It was previously reported that Sir Rod pays £340 a time to get a trim and a re-bleach every few weeks

Penny Lancaster appeared to give up on his lengthy pampering session, and decided to go shopping, spending nearly an hour inside an Apple store

He arrived in a chauffeur-driven car at the Steven Carey salon in Mayfair, central London, with his wife