Soap awards tend to be handed out to those who have featured in headline-grabbing stories: rape, murder, cancer – if you are a victim or perpetrator, your chances of winning increase enormously.

But there are many actors who are the glue that holds the fabric together; those doing the less exciting stuff on a weekly basis and who sometimes have to wait years for a really juicy storyline to come their way, despite being at the forefront of much of the drama.

Take Adam Woodyatt, who’s played Ian in EastEnders since the first episode in 1985.

He shows immense skill in the role, and whether the scene is one of tragedy or comedy (the comic timing of his delivery makes it laugh-aloud funny), he’s one of the most versatile actors of the genre.

Likewise, Helen Worth, who’s portrayed Gail in Corrie since 1974. She’s another actor with sublime comic timing who can also deliver the full gamut of emotions.

Then there’s Emmerdale’s Chris Chittell, in the role of Eric since 1986 (by the way, you can also catch him as a teenager in the 1967 film To Sir, With Love)… Let’s hear it for the long-standing stalwarts! 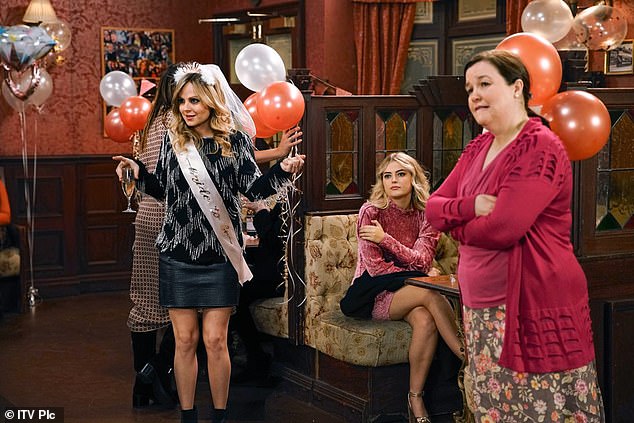 With Sarah about to add another notch to the marital bedpost, there’s another hen party to enjoy at the Rovers.Inevitably, it turns into a less-than-happy occasion when Beth storms in and accuses Bethany of planning to run off to London with Daniel and Bertie

How many marriages have the Platt family clocked up? There’s one for your pub quiz. I started to count but ran out of fingers.

With Sarah about to add another notch to the marital bedpost, there’s another hen party to enjoy at the Rovers.

Inevitably, it turns into a less-than-happy occasion when Beth storms in and accuses Bethany of planning to run off to London with Daniel and Bertie.

Bethany, you see, fails to get onto the writing course (yer don’t say), but the admissions officer phones to offer her an internship on a magazine instead.

Seriously? Does anyone in TV drama actually do any research into how journalism works these days? Here’s a suggestion for anyone wishing to break into journalism: ask Bethany for the name of that admissions officer, because on this achievement, he/she is clearly second-in-command to God.

There are some really horrid men in