Peter Weber faced an ultimatum from Madison Prewett on Monday's episode of The Bachelor as she promised to leave him for good if he slept with another woman.

When Peter, 28, confessed to having been 'intimate' during Fantasy Suite week with at least one of the other two women, Madison, 23, appeared to walk away from him.

'I hate this situation right now,' said Peter, who was in love with Madison, and begged her to stay. 'I know how fricking tough this is for you. I can't lose you. Say something.' 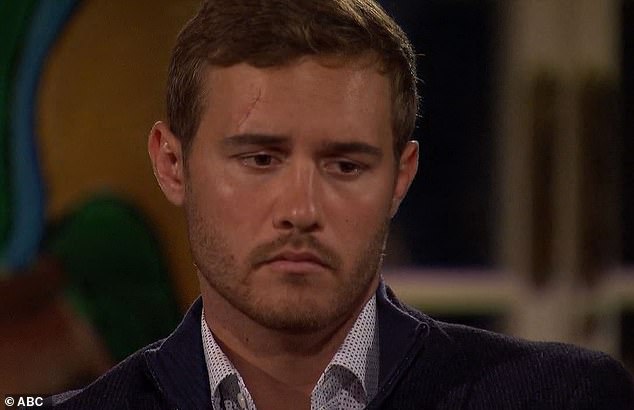 Tough ultimatum: Peter Weber faced an ultimatum from Madison Prewett on Monday's episode of The Bachelor as she promised to leave him for good if he slept with another woman

As the season 24 episode ended, Madison walked away from Peter, who looked devastated.

Just moments before, Madison had told him she was saving herself for marriage, which threw Peter for a loop, especially since he already knew she didn't want him to have sex with anyone else.

'Growing up, I made a commitment to myself, and I decided that I wanted to save myself for marriage,' said Madison, who worked as a foster-parent recruiter in Auburn, Alabama. 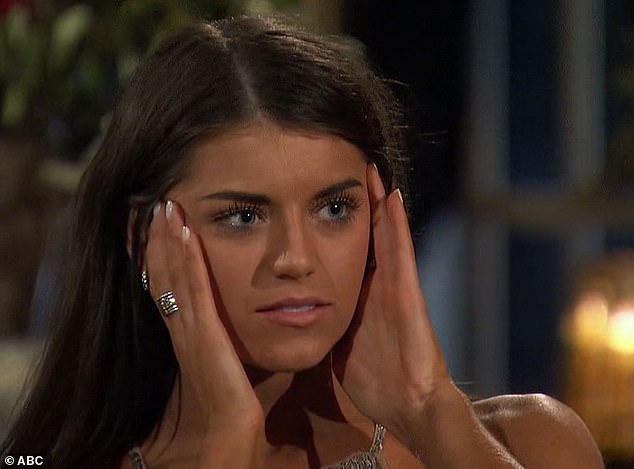 Saving herself: 'Growing up, I made a commitment to myself, and I decided that I wanted to save myself for marriage,' said Madison, who worked as a foster-parent recruiter in Auburn, Alabama

'The day that I say ''I do'' to the person that I want to spend the rest of my life with is the day that he's getting all of me. Body, soul and spirit, I'm his,' she told Peter.

Peter reeled, but remained calm, saying, 'I respect the hell out of you for being able to make that commitment to yourself, to save that for marriage, and that's such a beautiful thing in my eyes. And that's not me, and we're different in that regard.'

Madison had told Peter how she felt as soon as the last episode's rose ceremony ended as she learned that she was one of the last three women standing. 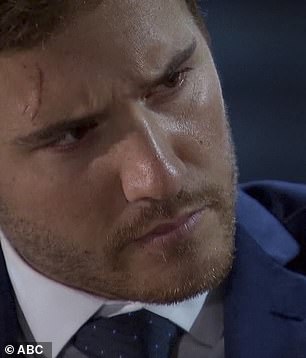 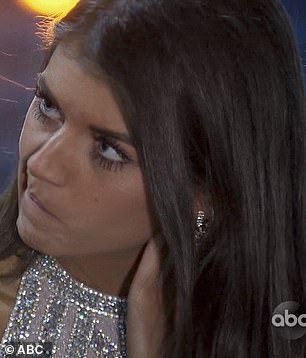 Sex talk: Peter listened as Madison said she was saving herself for marriage

'I'm really torn right now,' she admitted in a confessional. 'We're at a point where it's really serious and really real, and I'm developing stronger and stronger feelings for Peter. But I don't think Peter knows how much I'm struggling with moving to the next level of the Fantasy Suites, and the engagement.'

'My faith is literally everything to me and so I have saved myself for marriage,' she revealed. 'I can't keep moving forward and continue this relationship if I don't get the clarity and peace and confidence that I need.'

As the two of them sat on a bench outside Camarillo Airport, in Camarillo, California, Madison poured out her heart to Peter, who looked concerned. 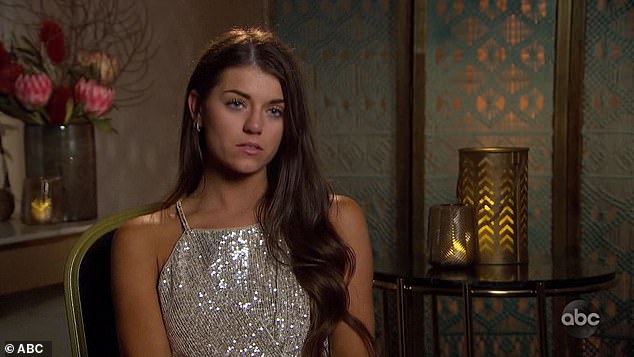 Strong faith: 'My faith is literally everything to me and so I have saved myself for marriage,' Madison revealed 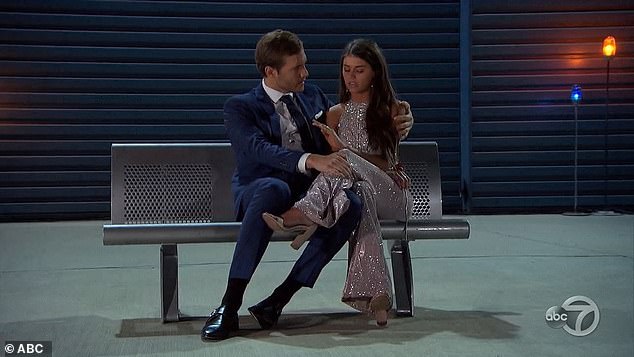 Bench talk: As the two of them sat on a bench outside Camarillo Airport, in Camarillo, California, Madison poured out her heart to Peter, who looked concerned

'I want to be honest about who I am, and how I feel,' she told him. 'If next week you were to sleep with somebody else, it would be really hard for me to really move forward in this. And I just feel like I owe it to you to be up front with you, and honest about that.'

'What are you saying?' Peter asked. 'If I were to spend the night with someone else, that is not something that you could do?' 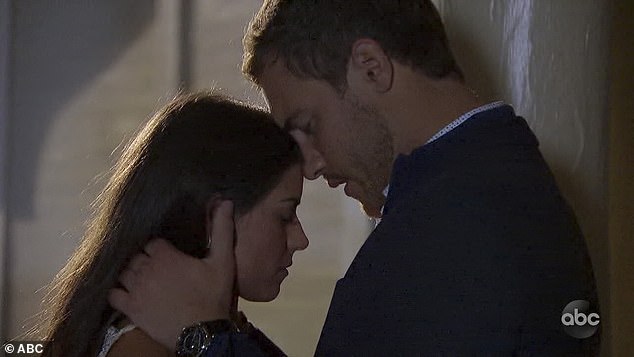 Tender moment: Peter and Madison had an emotional conversation about their status

Privately, Peter admitted that Madison meant 'so much' to him, noting that he'd told her before any other woman on the show that he was falling in love with her.

'But [I] definitely was kind of thrown a curveball just now,' he observed. 'And it's tough being in this position because I don't just have one relationship right now.' 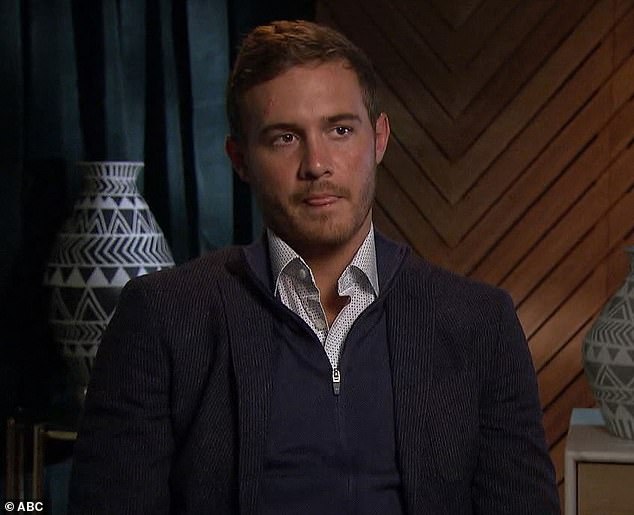 Curveball thrown: The pilot said he was thrown a 'curveball' by Madison and her ultimatum

Both of those women had said they were falling in love with him, while Madison had not made the declaration to Peter.

'That's definitely frustrating because I need to feel that she is on the same level that I am at,' Peter added. 'This next week, I am going to have to make some really tough decisions.'

When the women arrived on the Gold Coast of Australia for their Fantasy Suite dates, Peter was no less confused, saying he felt 'very seriously' about all three of them that were left.

Madison, however, was dreading the entire week, and things were made even worse by the fact that all three potential brides were rooming together Down Under. 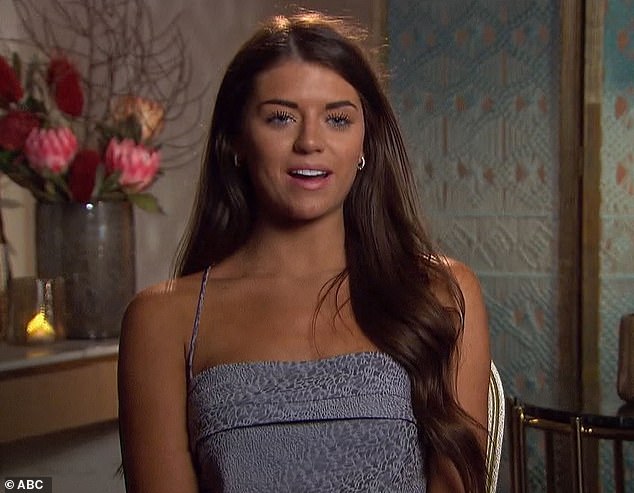 Rough week: Madison, however, was dreading the entire Fantasy Suite week, and things were made even worse by the fact that all three potential brides were rooming together

Peter first asked Hannah Ann to go on a jetskiing date with him, and as their day kicked off, she crowed, 'Hopefully it's a long day, long night. I hope he's ready.'

She empathized with the difficulties she knew he might be having 'compartmentalizing' his feelings for everyone, and Peter felt better for her understanding and confidence in him.

'I believe in us,' Hannah Ann said. 'And if you believe in something, it overrides a lot of fear.' 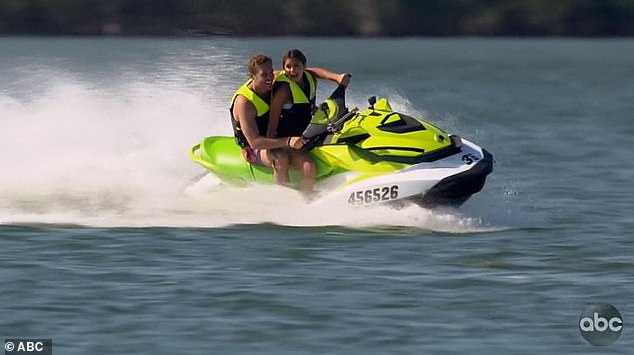 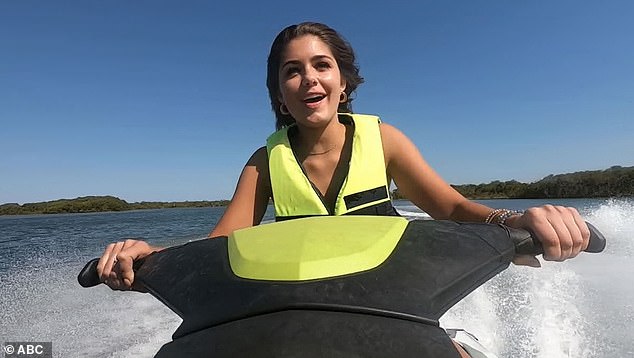 Speeding up: The model raced on the water with Peter 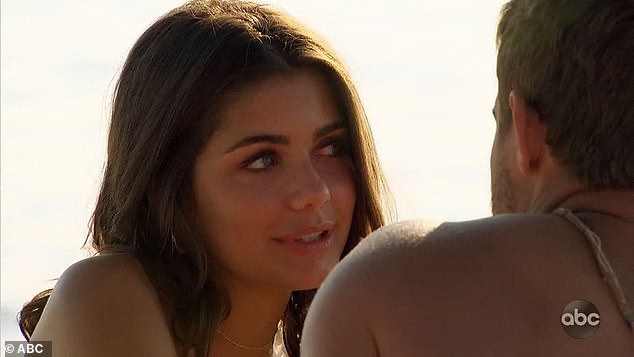 Falling hard: Hannah Ann told Peter that she believed in them

Peter told Hannah Ann he was falling in love with her, and privately added, 'If this is what love is, then this is true love, because I'm feeling it. I never want to come down from this.'

Over dinner, Hannah Ann gave Peter the freedom to do what he needed to make a decision.

'I want you to do what you have to do, to get there if you can,' she offered. 'I don't have to know the details. I don't care. It's about being together in the end.' 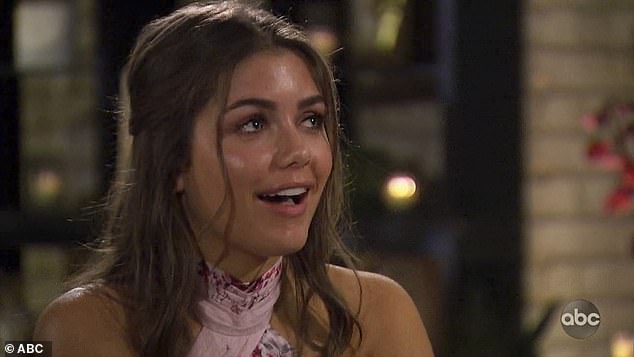 Dinner talk: Over dinner, Hannah Ann gave Peter the freedom to do what he needed to make a decision

She went confidently with Peter to the Fantasy Suite, which had a hot tub, luxurious lounge and gorgeous view of the Gold Coast.

'I am so in love with this man,' Hannah Ann said, drinking champagne and making out with him.

Back at the hotel,