The shocking slur everyone missed on Married At First Sight: Jonethen calls cheating groom Michael the C-word at the dinner table... and it very nearly made it to air uncensored Do you have a story about a MAFS participant? Email [email protected]

But as the cheating scandal between Hayley Vernon and Michael Goonan unfolded, there was one eyebrow-raising moment that many viewers missed.

Jonethen Musulin, who was watching from a safe distance, took things to another level by gesturing at Michael and saying: 'I don't trust that c**t.' 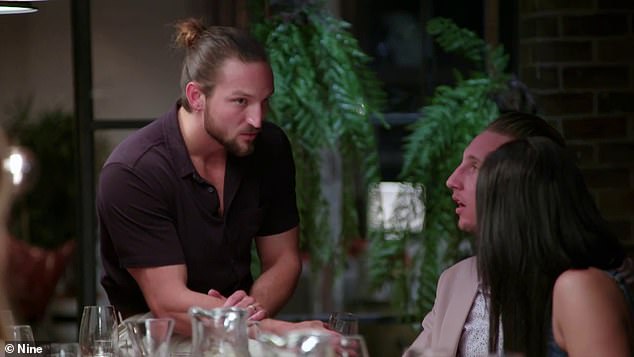 The shocking slur everyone missed on Married At First Sight: Jonethen Musulin calls cheating groom Michael Goonan the C-word at the dinner table... and it very nearly made it to air uncensored

It's believed that producers only caught the slur at the last minute, as a version of the episode released to the media included the word uncensored.

It's not the first time the C-word has been uttered on Married At First Sight.

Alison Hammond bakes brownies but FORGETS to add eggs and baking powder in ...