Her attempts to trademark her daughter's name were potentially thwarted last week by a clothing company.

Bur that didn't stop Kylie Jenner from doting on her sweet daughter by in an adorable Instagram post on Wednesday..

The Keeping Up With The Kardashians star, 21, posted some adorable snaps of the tot, two, clutching a bejewelled handbag on the steps outside their sprawling California home. 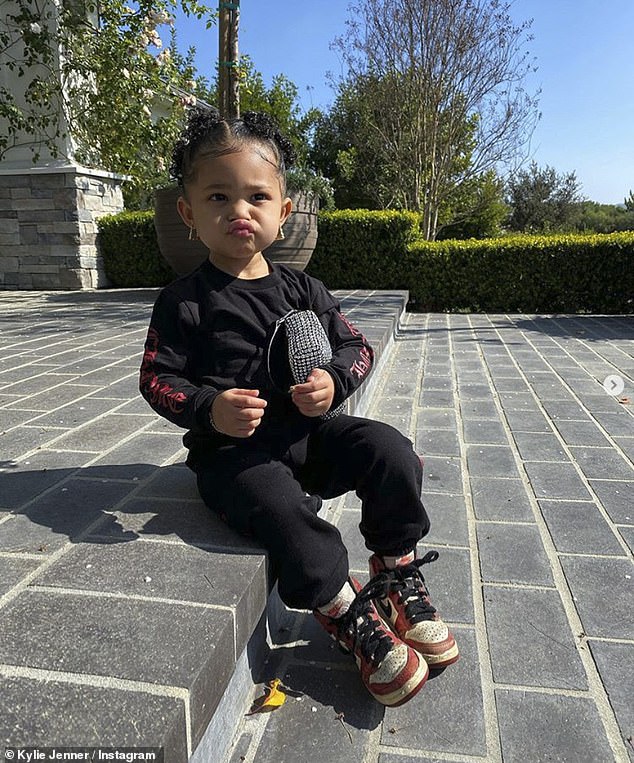 Too cute: Kylie Jenner, 21, shared some adorable snaps of her daughter Stormi, two, as she perched outside outside their home on Wednesday

Stormi wasn't too concerned with being photogenic as she puffed out her lips for the snap clad in a cute matching black tracksuit.

The toddler looked surprisingly edgy in the black Chrome Hearts top with writing on the back and sleeves, along with matching sweatpants from the same brand.

She wore a pair of vintage-looking red and white Air Jordans, and she kept a rhinestone studded handbag firmly in her grasp. 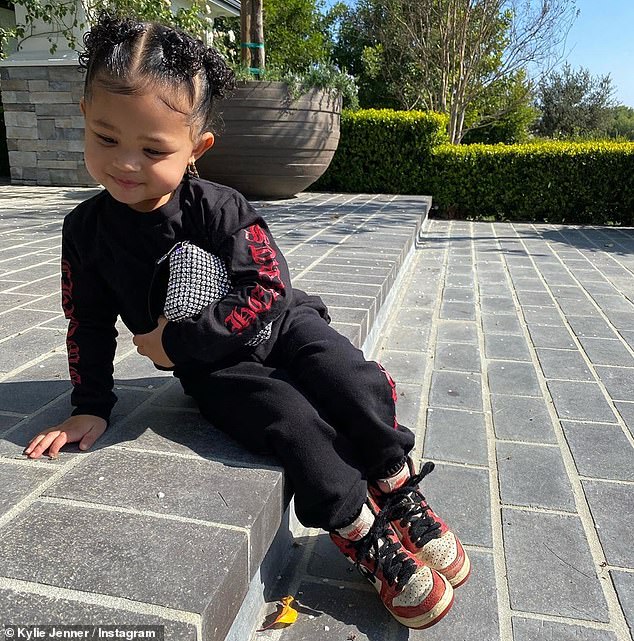 Fierce: The toddler looked sweet in a black Chrome Hearts T-shirt with writing on the back and sleeves, and she also had on a pair of black sweatpants from the same brand 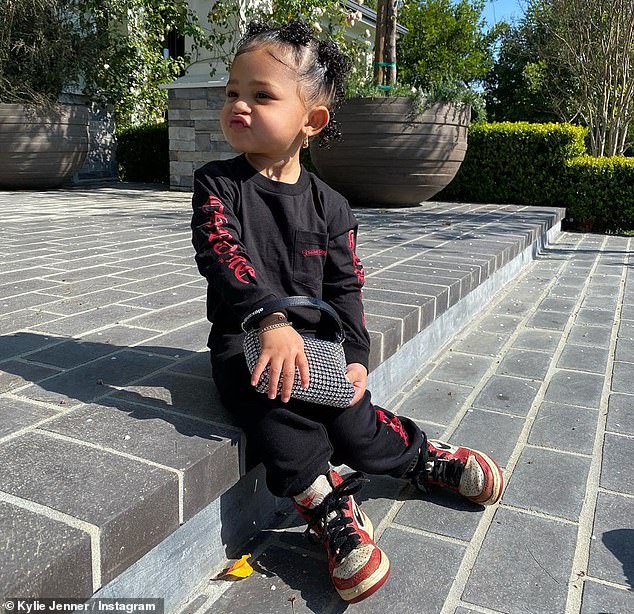 Confident: Stormi wasn't too concerned with being photogenic as she puffed out her lips for the snaps on the steps 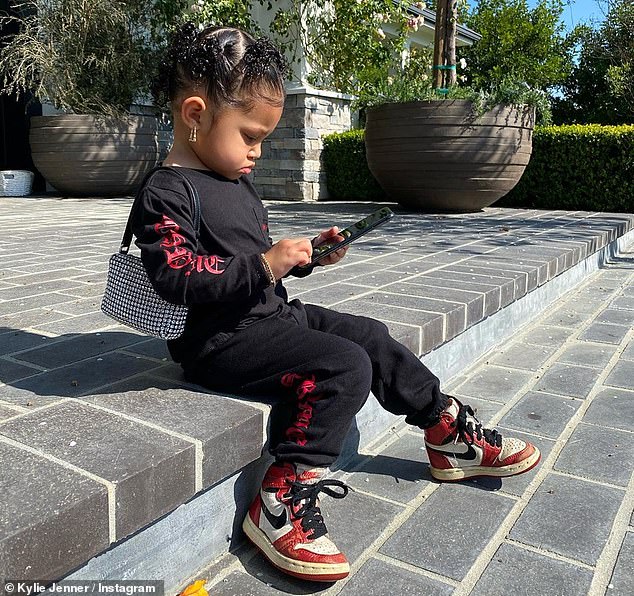 Old school: She wore a pair of vintage-looking red and white Air Jordans, and she kept THE rhinestone studded handbag firmly in her grasp 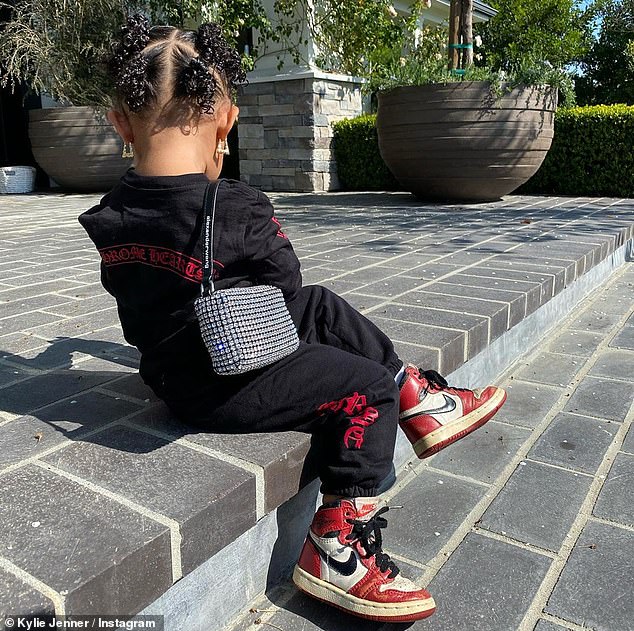 Inseparable: Continuing to gush about her daughter, she captioned the post: '#LOVEOFMYLIFE'

Kylie is famous for her haute couture looks, but she was happy to let Stormi wear something casual and comfortable.

It comes after the cosmetics billionaire tried to trademark her daughter's name recently, though she seems to have been stymied by a clothing company, according to Page Six.

After she recently tried to trademark Stormi and Stormi World, the brand fought back by filing an opposition to her application, in which it said her trademark might confuse its customers.

The company also wrote that she had 'no bona fide intent to use mark in commerce for identified goods or services,' meaning that it doubted she actually intended to use the trademarks.

The clothing brand previously tussled with DJ Khaled after he claimed it was using his son Asahd's name to sell its clothing. 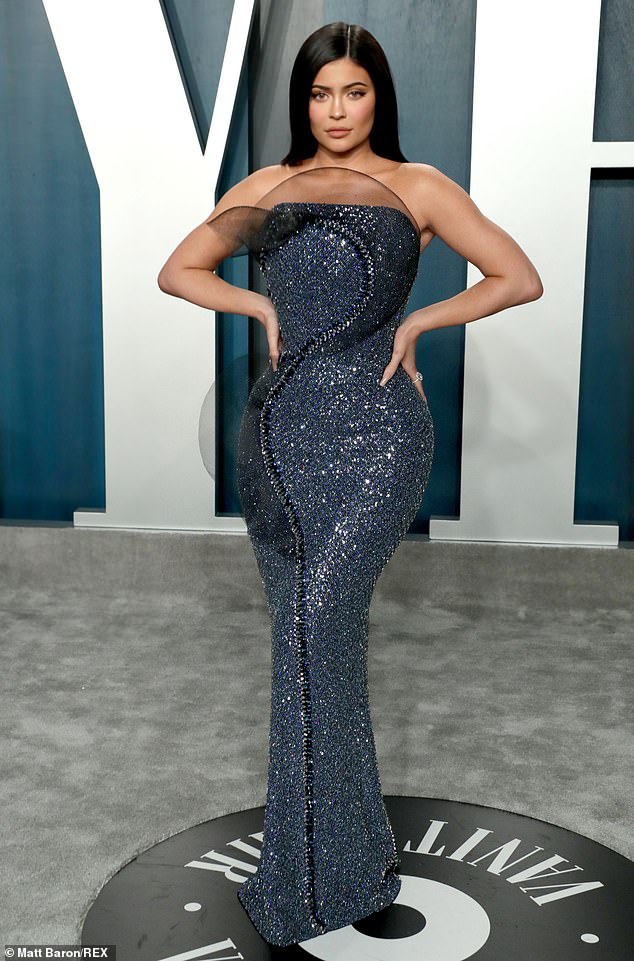 You snooze, you lose: Kylie recently tried to trademark Stormi's name, but she may have been stymied by a clothing company that trademarked Stormi Couture (pictured on February 9) 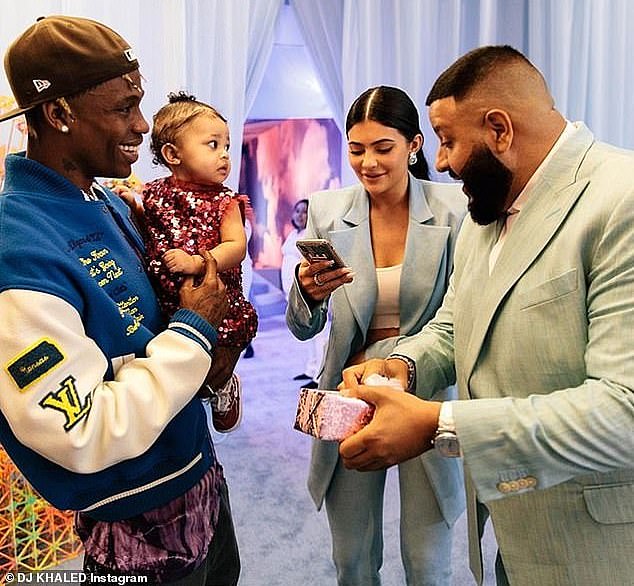 There's a pattern: The company was previously sued by DJ Khaled for using his son Asahd's name to sell its clothing

Loss of smell and taste in some COVID-19 patients may be long term or ...

'It is time to make your way home': PM's message to international students