It's all over! Married At First Sight's Natasha Spencer and Mikey Pembroke break up and quit the show following weeks of fights and THAT sex joke

Married At First Sight's Mikey Pembroke and Natasha Spencer endured one of the most amicable breakups in the history of the show during Sunday's episode.

The couple made the mutual decision that they are better off as friends at the latest commitment ceremony, and were applauded by the relationship experts.

It comes after they endured weeks of arguments, with Natasha pushing Mikey to breaking point after revealing he 'only lasted 10 seconds' in the bedroom. 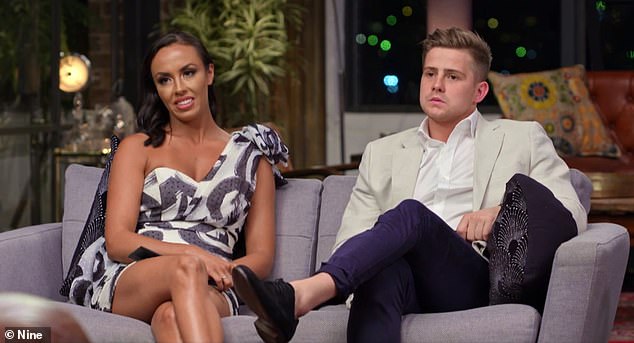 It's all over! Married At First Sight's Mikey Pembroke (R) and Natasha Spencer (L) endured one of the most amicable breakups in the history of the show during Sunday's episode

As they first sat down in front of the relationship experts, Mikey, 29, and Natasha, 26, revealed that they missed last week's dinner party to focus on their relationship.

'If we had any chance of making this work, it was best we gave it a miss and concentrated on us with a clearer head,' admitted Mikey.

'After we met the parents, I saw a side of Natasha that was raw, caring and was very vulnerable. We made a pact to wipe away all of the bad and try to build on what we have. Now we're getting on best as friends, so why change that dynamic?'

PREV Kim Kardashian calls Kylie Jenner her 'twin' after they both make lemon cakes ...
NEXT TALK OF THE TOWN: Humble Princess Anne shows 'call me Harry' what being ...