Kesha guzzles a bottle of beer and twerks during wild early-morning performance on Sunrise... as she hints at an Australian tour

Kesha put her own spin on the term 'champagne breakfast' during her live performance on Sunrise this Tuesday.

Despite the early hour, the hitmaker, 33, delivered a high-energy live show as she outrageously guzzled from a bottle of beer and twerked on stage with her backup dancers.

The American singer, who performed at the Sydney Gay & Lesbian Mardi Gras on Saturday, wore an all-pink ensemble consisting of a latex Hawaiian shirt, glittery leggings and sneakers.

She completed her eclectic look with liberal amounts of rhinestone-encrusted jewelry and crystal-covered sunglasses.

Kesha's back-up danger, who were all dressed in pink tie-dye outfits, playfully interacted with the star as she belted out hits including We R Who We R and Raising Hell.

During her rendition of Tik Tok, Kesha shouted, 'who wants to be my baby bird?' before drinking from a beer bottle. 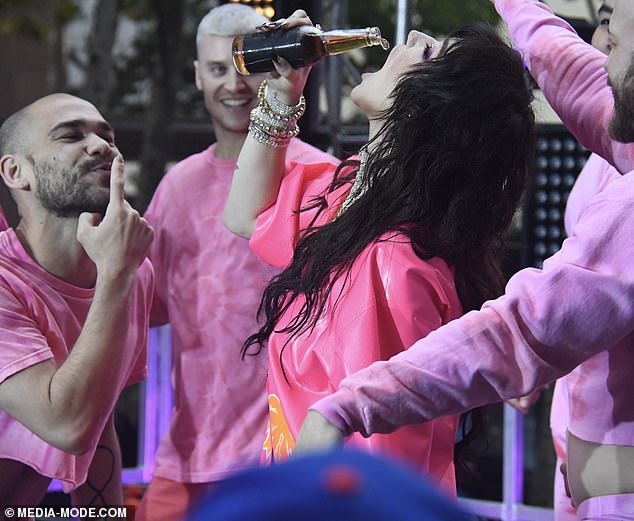 Isn't it a bit early for that? Kesha, 33, guzzled a bottle of beer and twerked on stage during wild early-morning performance on Sunrise this Tuesday

She immediately spat out the liquid into the mouth of one of a willing backup dancer.

Following the performance, the singer spoke to Sunrise's Sam Armytage and David 'Kochie' Koch about how much she loves

PREV Sophie Turner and Joe Jonas continue to fuel pregnancy rumors while shopping ...
NEXT TALK OF THE TOWN: Humble Princess Anne shows 'call me Harry' what being ...