Victoria Fuller was eliminated on Monday's episode of The Bachelor after Peter Weber told her his heart was 'farther along' with two other women.

'I just want you to know how real everything was for me,' Peter, 28, told Victoria, 26, after a rose ceremony in which he chose Hannah Ann Sluss and Madison Prewett, both 23, instead.

'I was falling in love with you,' he swore. 'All of those feelings. Everything from that last day, waking up with you that next morning… how I was expressing that. That was all so real.' 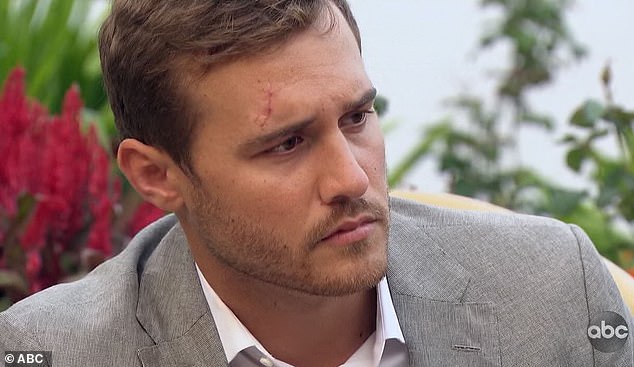 Tough choice: Peter Weber sent home Victoria Fuller during a rose ceremony on Monday's episode of The Bachelor on ABC

'I just know that my heart is farther along with the two other girls,' he admitted.

Victoria, a medical sales representative from Virginia Beach, Virginia, said that she felt 'stupid' to have fallen for him, but Peter praised her for having put her heart 'out there.'

She repeated that mantra in the limo as she left, confessing that she was 'just sad.' 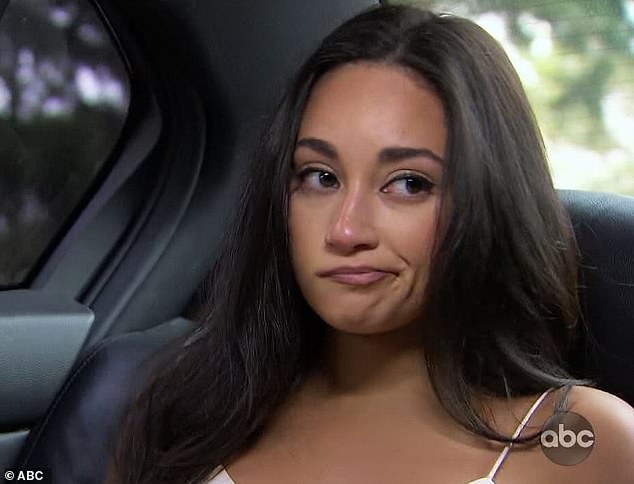 Felt stupid: Victoria admitted that she 'felt stupid' after Peter failed to offer her a rose 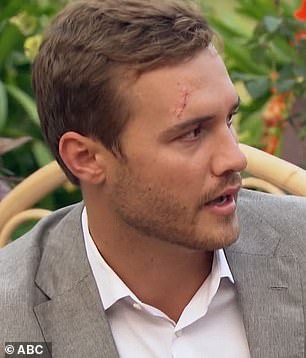 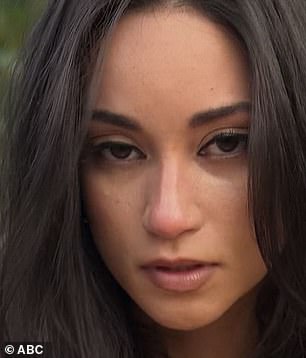 So real: Peter told Victoria that his feelings for her were 'so real' as she was eliminated

'I was just hoping to find love,' Victoria offered. 'Isn't that what anyone's hoping for?'

Peter and Victoria declared their love to one another late in season 24, after having a blast on dates, riding roller coasters and dancing together at live concerts.

Victoria had always thrown some obstacle in Peter's way, but the Westlake Village, California pilot said he loved the way she challenged him. 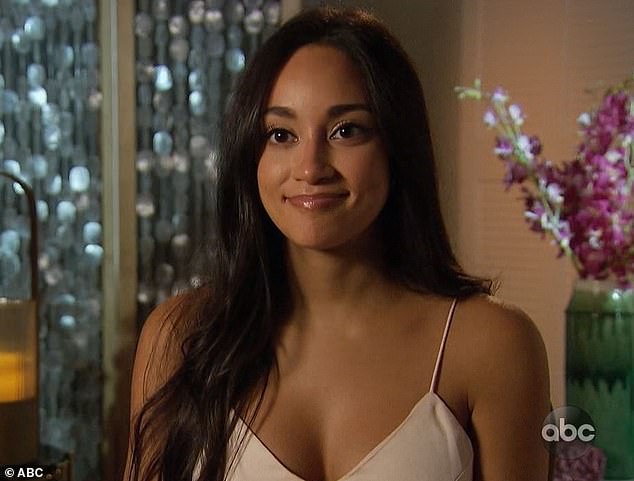 Love search: 'I was just hoping to find love. Isn't that what anyone's hoping for?', Victoria said in a confessional

He changed his tune during Monday's episode deciding that it would be Hannah Ann and Madison in the show's two-night season finale next week.

At the beginning of the episode, Peter was a nervous wreck, regretting that his 'intimacy' in the Fantasy Suites that week may have caused him to lose Madison.

The foster-parent recruiter from Auburn, Alabama had told Peter that if he slept with other women, she didn't know if she could continue. 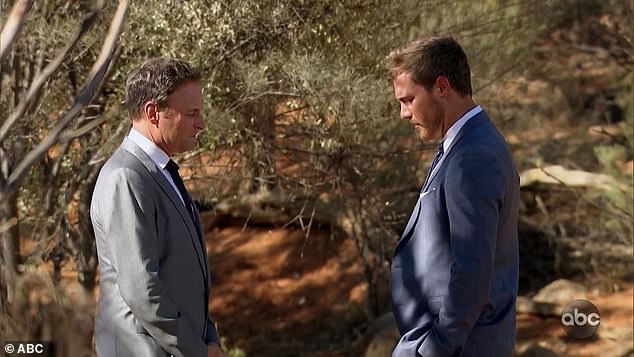 Nervous wreck: At the beginning of the episode, Peter was a nervous wreck, regretting that his 'intimacy' in the Fantasy Suites that week may have caused him to lose Madison Prewett

'I get her frustration and her anger and pain with me,' Peter told host Chris Harrison, 51. 'I hate that I would do that to her, and maybe I, like, I didn't go about this week the right way.'

He walked to the rose ceremony, unsure if Madison would show, and was thankful when she did.

'You all have a little piece of my heart,' he told everyone. 'And knowing that I am about to hurt one of you and end this right now is absolutely destroying me.' 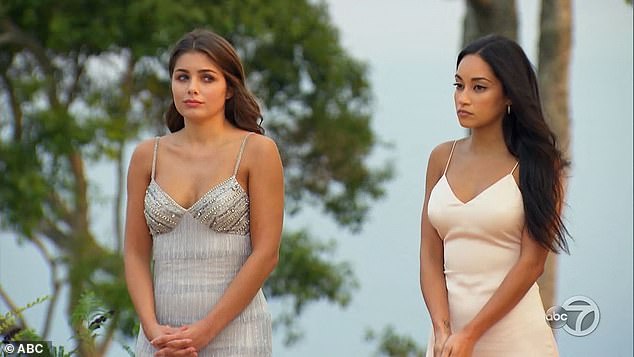 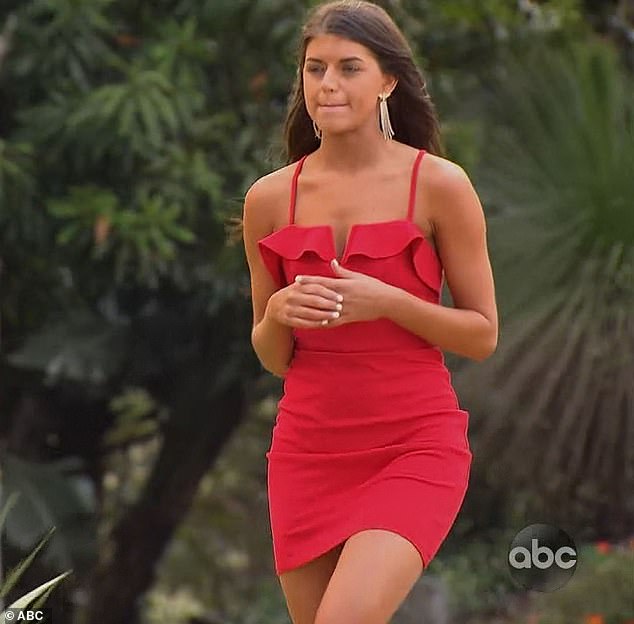 Late arrival: Madison was a late arrival to the rose ceremony after telling Peter that she could not continue if he slept with other women during Fantasy Suite week

Peter's hands shook as he gave the first rose to Hannah Ann, and a few petals fell off the second as he offered it to Madison, sniffling with tears in his eyes.

'Madison,' he said, looking penitent. 'Will you accept this rose?'

She paused before replying, 'Yeah,' which had Peter asking, 'You sure?' 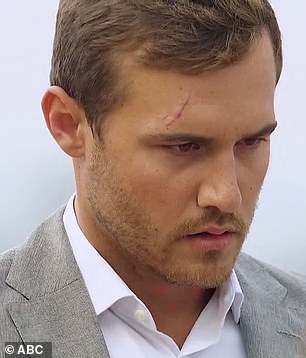 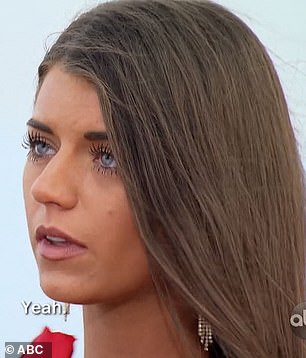 Flower offering: Peter offered his rose to Madison and she accepted, eliminating Victoria

Victoria, who'd earlier delighted in telling Chris that she was in love with Peter, seemed resigned as he walked her out.

'I think the conversation he had with Madison changed everything that he felt with me,' Victoria shared. 'The fact that someone could sway his opinion with an ultimatum, I mean it sucks.'

When Peter walked back to the two remaining women, Madison toasted him. 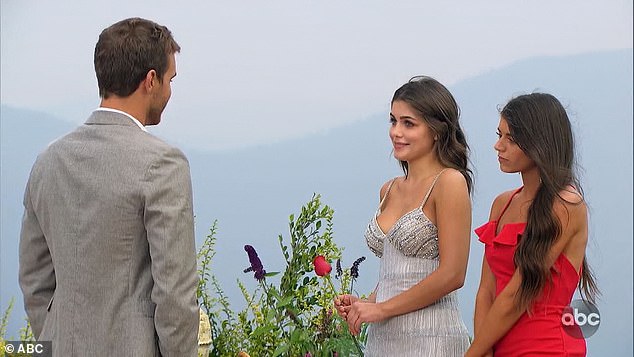 'Here's to seeing if love can conquer all,' she offered, raising her champagne.

The show then segued into its next chapter, The Women Tell All, which was shot in Los Angeles.

Seventeen of the women who hadn't ended up with Peter sat in a semicircle, giving their opinions about the season and sharing the real stories behind their fights and friendships. 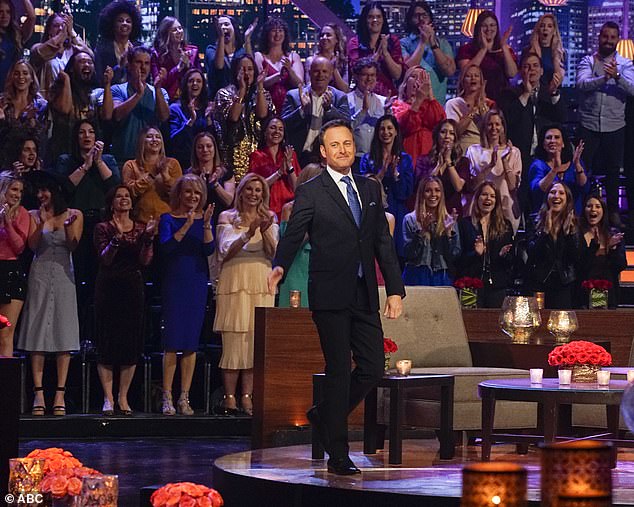 Telling all: The show then segued into its next chapter, The Women Tell All, which was shot in Los Angeles and hosted by Chris Harrison

She had harsher words, however, for former Miss Texas USA Alayah Benavidez, 24, calling her words 'scripted,' and labeling her over-the-top behavior a 'production' for the cameras.

Lexi Buchanon, a 26-year-old marketing coordinator from New York City, recalled that Alayah had once told them she 'didn't want to be disqualified,' as though it was a pageant contest. 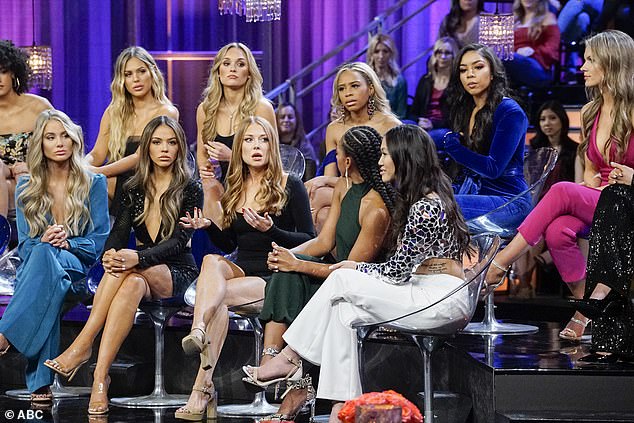 Together again: Victoria P, Kylie, Sydney, Sarah, Lexi, Kiarra, Tammy, Deandra and Savannah discussed their experiences from their side of the stage

Alayah said her 'biggest regret' was that she had ended up spreading social media gossip about Victoria to the other women after she'd taken a break from the show.

'Sometime I just don't think before I talk,' she admitted, though she denied affecting a dramatic personality for the show, saying she had always been 'obnoxious in person.'

Shiann Lewis, a 27-year-old administrative assistant from Las Vegas, called out Victoria Paul, also 27, for pretending not to know Alayah, with whom she was clearly friends. 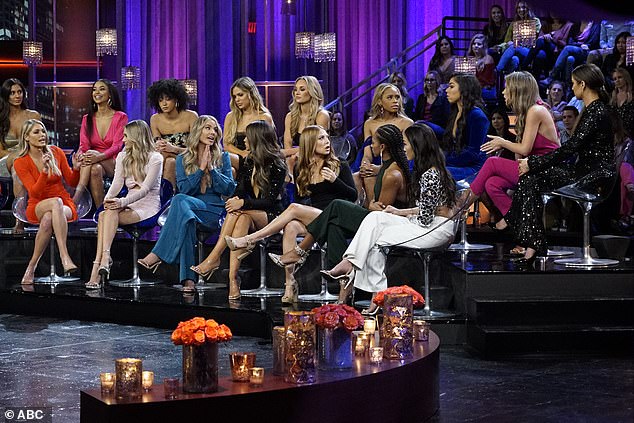 Someone called Paul 'fake,' which set off a giant argument that had Chris calling time out.

He then asked Kelsey Weiers, 28, about 'Champagne-gate,' an incident in which she went ballistic after Hannah Ann drank her 'special' bottle of champagne with Peter.

The professional clothier took everyone's ribbing in stride, saying she knew she came off as 'balls-to-the-wall-crazy,' but she'd thought everyone knew it was for her and Peter. 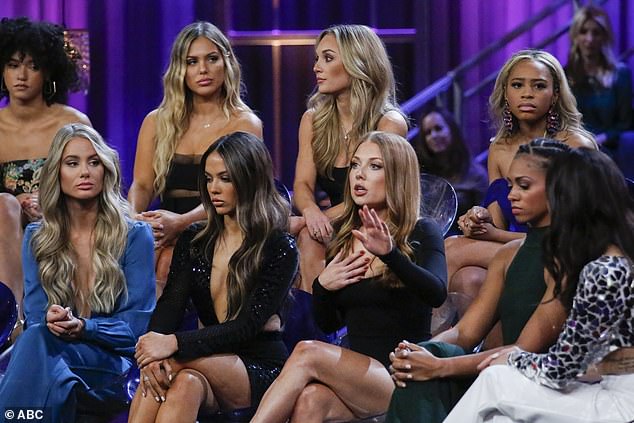 Worked up: The women got worked up during the Tell All episode

'As they say, all's well that ends up your nose,' Chris joked, referring to a subsequent moment in which Kelsey drank champagne with Peter, only to see it foam all over her face.

'And that burned,' Kelsey remembered. 'That hurt so bad.' 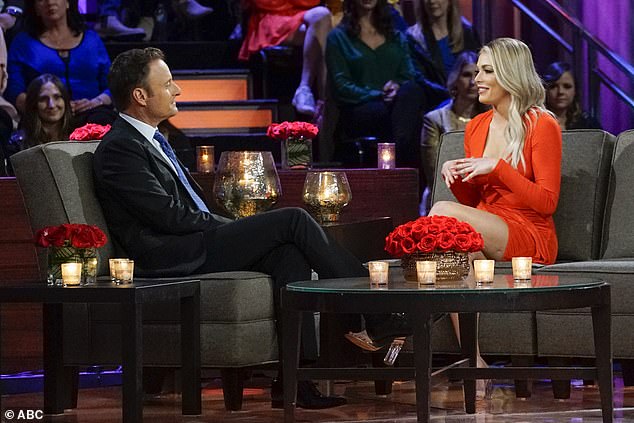 Tammy Ly, a 24-year-old house flipper from Syracuse, New York, denied telling Peter that Kelsey was an 'alcoholic' and 'pill popper,' saying only that she was 'concerned.'

'I'm sorry, but we are all swapping saliva with the same guy,' she noted. 'It is my business.'

PREV The Bachelorette alum Rachel Lindsay condemns 'online harassment and hate' ...
NEXT TALK OF THE TOWN: Humble Princess Anne shows 'call me Harry' what being ...

Why you might see AFL coaches on construction sites soon mogaznewsen