A spoof advert from mattress brand Koala sent Married At First Sight fans into a frenzy as it aired during one of the show's commercial breaks on Tuesday.

A voice-over declared the participants 'cheating piles of trash' - prompting viewers to brand it one of 'the best pieces of television advertising' ever. 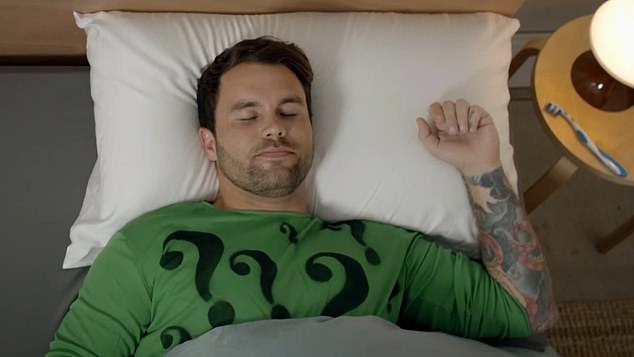 Surprise! A spoof advert from mattress brand Koala (pictured) sent Married At First Sight fans into a frenzy as it aired during one of the show's commercial breaks on Tuesday night

The advert began with a shot of a man peacefully sleeping in bed, wearing a green t-shirt inspired by The Riddler, almost identical to David's on the show last week.

Hilariously, a toothbrush is seen on the bedside table next to the actor, referencing David's recent revenge act on Hayley, where he cleaned the toilet with hers.

It then zoomed out to reveal another man and a woman, presumably Hayley and Michael, kissing next to the actor as he slept, amid the

Richard Madeley sports a protective face mask as he heads out to the shops amid ...