And on Wednesday, it was announced that actress Georgina Haig has stepped in to play Rachel Rafter in Amazon Prime's upcoming reboot titled Back to the Rafters.

Georgina, 31, was featured front and centre in the first promotional photo for the sitcom released this week. She was joined by actors Hugh Sheridan and Angus McLaren, who play her brothers Ben and Nathan Rafter. 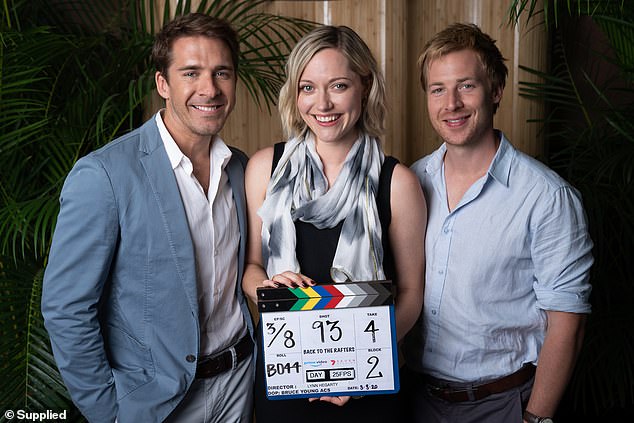 Replaced: On Wednesday, it was announced that Georgina Haig (centre) has stepped in to play Rachel Rafter in Back to the Rafters after the departure of Jessica Marais. She was pictured with Hugh Sheridan and Angus McLaren in a promo image for the sitcom released this week

Georgina looks similar to Jessica and is only four years her junior, which means the decision to re-cast Rachel won't be too disruptive for fans.

She has starred in several U.S. TV shows in the past, including Fringe and Limitless, and also portrayed a live-action version of Frozen's Queen Elsa in Once Upon a Time.

In addition to returning favourites like Rebecca Gibney and Erik Thompson, Back to the Rafters will feature several new cast

PREV Sheridan Smith insists she has no hard feelings after Gavin and Stacey snub
NEXT James Bond film No Time To Die 'could be released three weeks EARLY due to ...