Kylie Jenner reveals she missed Balmain's Paris fashion Week show last year due to severe strep and staph infection: 'I was bleeding from the mouth'

Kylie Jenner has admitted that during last year's Paris fashion Week was the sickest she's ever been.

The 22-year-old reality TV star spoke about her illness in a comment she made on a fan account on Wednesday.

'[F]or those wondering i never had flu-like symptoms!' began the makeup mogul, in response to her missing the Balmain Spring 2020 fashion show last September. 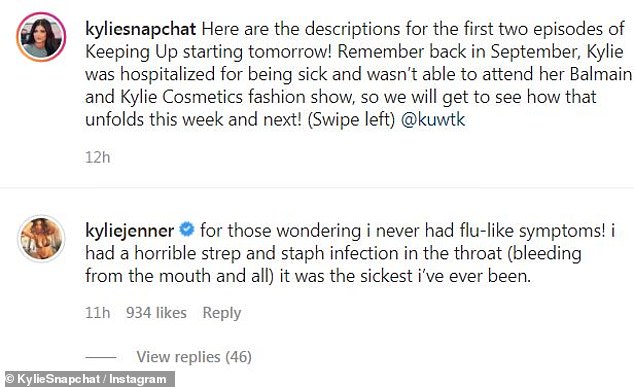 Suffering: Kylie Jenner has admitted that during last year's Paris fashion Week was the sickest she's ever been

'I had a horrible strep and staph infection in the throat (bleeding from the mouth and all) it was the sickest I’ve ever been,' concluded the mother-of-one.

Technology Patients with autoimmune diseases are running out of hydroxychloroquine