The Assistant is not the first film to broach the subject of sexual harassment by powerful men in the entertainment industry, which spawned the #MeToo movement, and it certainly won’t be the last.

But it will always be one of the best. I liked last year’s Bombshell, which starred Charlize Theron, Nicole Kidman and Margot Robbie, and chronicled the downfall of Roger Ailes, the head of Fox News, who was eventually forced to resign not because of his long history of unwanted sexual advances, but rather because they had been made public. 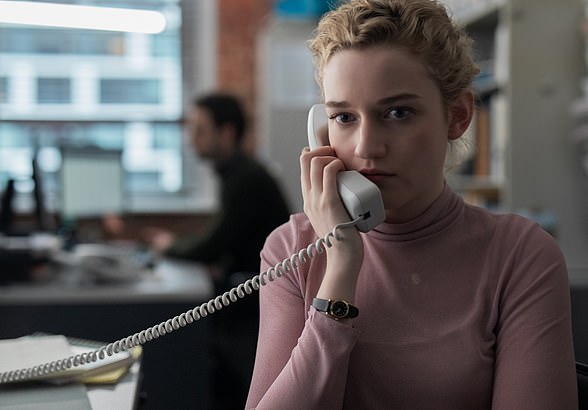 Julia Garner shines in The Assistant, which follows an assistant working in a New York City workplace with a n unmistakable resembles to Harvey Weinstein's company Miramax

The Assistant is much less starry and takes a very different, far subtler approach, fictionalising events over the course of a single day in a New York City workplace that is unmistakeably modelled on the offices of producer Harvey Weinstein’s company Miramax.

Nor, at risk of giving away spoilers, is there any comeuppance in this story.

The unnamed and unseen Weinstein-type character is omnipotent; everyone in the organisation dances to his tune.

Another way in which Australian writer-director Kitty Green’s excellent film differs from Bombshell is that it’s told not from the perspective of a victim — at least, she’s not a victim yet — but from that of a