Jackie 'O' Henderson fears her 'sensitive' daughter Kitty, nine, is secretly taking advantage of her by demanding snacks and being messy during coronavirus lockdown

Radio presenter Jackie 'O' Henderson has vowed to be a stricter parent after her nine-year-old daughter, Kitty, started taking advantage of her during coronavirus lockdown.

She explained on The Kyle and Jackie O Show on Monday that Kitty, who is being home schooled via Zoom, had been asking for snacks 'like it's hotel room service' and leaving a mess around the house.

'I'm cleaning up after her constantly and I'm doing a lot of her work,' she said. 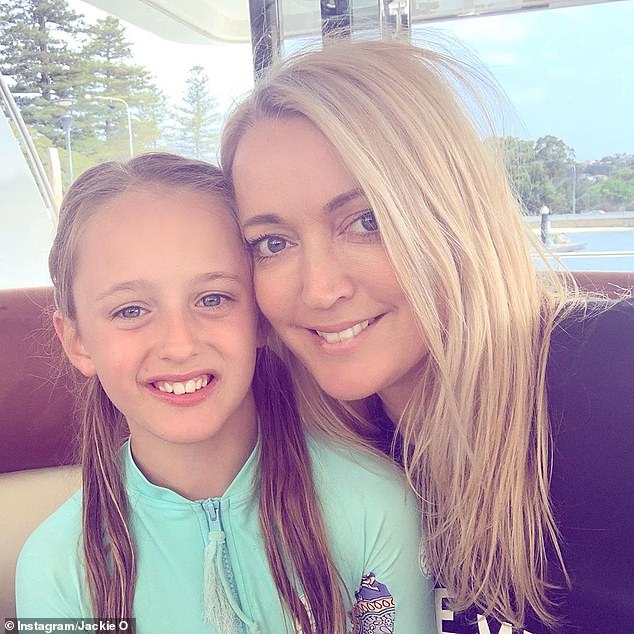 Laying down the law: Jackie 'O' Henderson (right) has vowed to be a stricter parent after her nine-year-old daughter, Kitty (left), started taking advantage of her during COVID-19 lockdown

Her co-host, Kyle Sandilands, said: 'That is not how I would parent. You'd make your own food and drink or you'd starve to death.'

Jackie didn't quite agree, but did concede she was being too soft on her daughter.

'I've decided that I'm going to become a stricter parent now,' she declared.

When Kitty demands food during class, Jackie said, she is going to respond with something like: 'You know where the fridge is.'

Kyle didn't think she was being tough enough, and told her sarcastically: 'That is so strict. I wouldn't be able to handle that strictness!'

PREV Camilla Belle cuts a chic figure in a stylish white summer dress as she covers ...
NEXT Noel Gallagher breaks COVID-19 lockdown rules as he flits between London pad ...