She updated her supporters on Thursday night to reveal her husband Derek Draper is 'still with us' and 'fighting so hard' to beat coronavirus.

And on Friday morning, Kate Garraway's Good Morning Britain co-stars Charlotte Hawkins and Ben Shephard, 45, sent her 'so much love' in a sweet moment.

Charlotte, 44, looked understandably emotional as she said: 'Well Kate, we send so much love back to you.

'This is especially a poignant moment for Kate, so sending lots of love.' 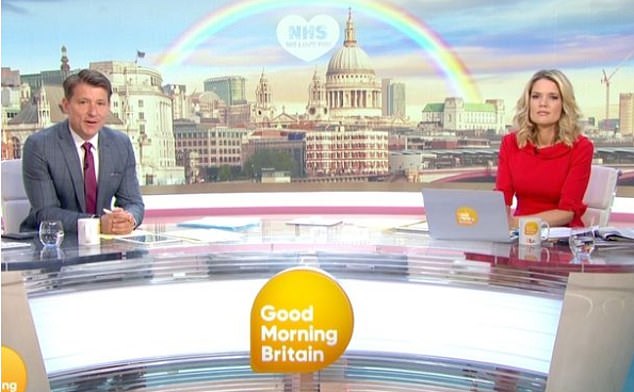 'This is an especially poignant moment for her': Emotional Charlotte Hawkins and Ben Shephard 'send love' to Kate Garraway on GMB on Friday as her husband Derek Draper battles coronavirus

Ben appeared alongside Charlotte after previouly wishing Kate, 53, a happy birthday earlier in the week as she was without Derek, 52, on her special day for the first time in 16 years.

The night before, Karte joined millions of people around the country in a nationwide applause for the NHS, police and key workers.

The Good Morning Britain host cut a casual figure as she stood on the street outside her house and filmed her neighbours joining in the applause. 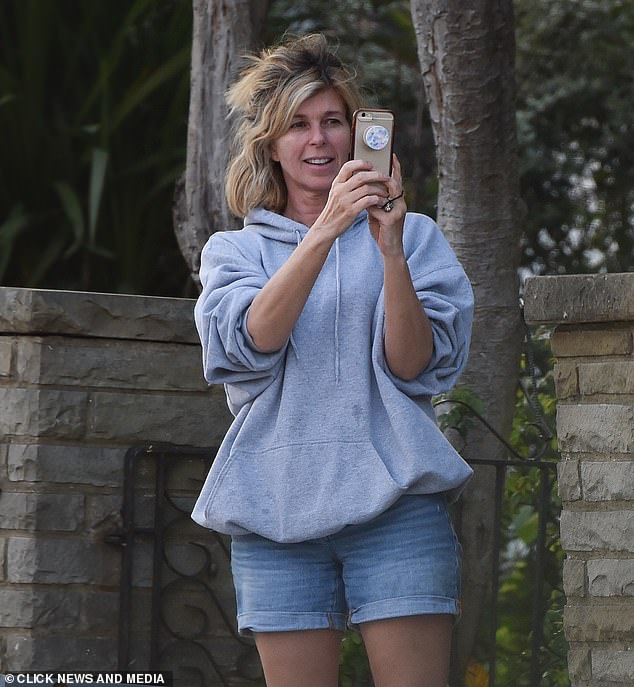 Showing incredible strength: Kate 53, joined millions of people around the country in a nationwide applause for the NHS, police and key workers during the coronavirus pandemic

Taking to Instagram, Kate shared a video of her street once again applauding NHS staff with some even setting off red, white and blue smoke flares in honour of Victory in Europe (VE) Day.

In a lengthy caption she updated fans on Derek's condition, revealing he's 'still with us,' as he continues to battle the virus.

Kate added she's still 'awestruck' by NHS workers working on the frontline to fight the deadly virus, and urged her fans to take inspiration from Captain Tom Moore ahead of the Second World War Anniversary on Friday. 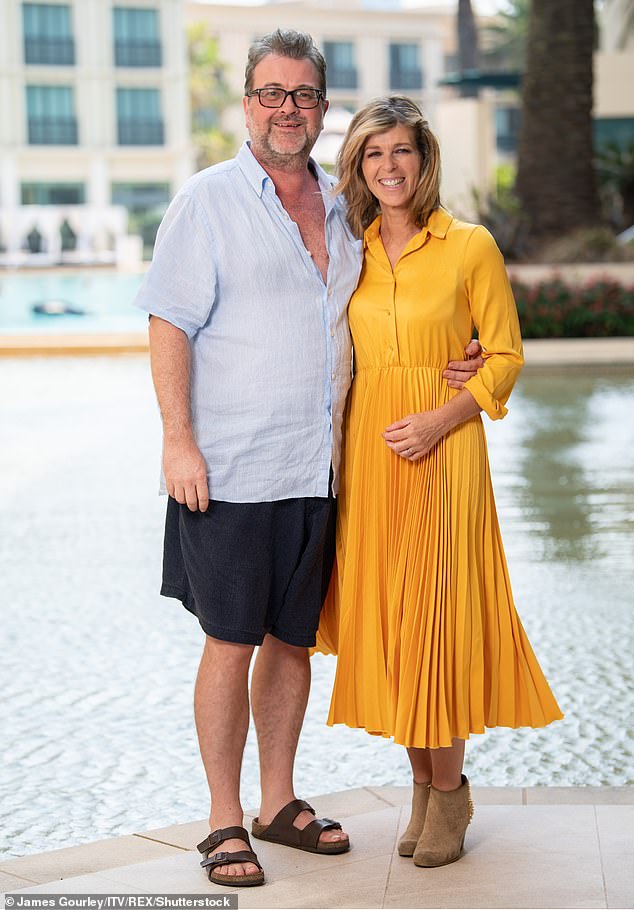 Love: The broadcaster also told fans that her husband Derek was 'still with us' and 'fighting so hard,' as he continues to battle COVID-19 in hospital (pictured together in December) 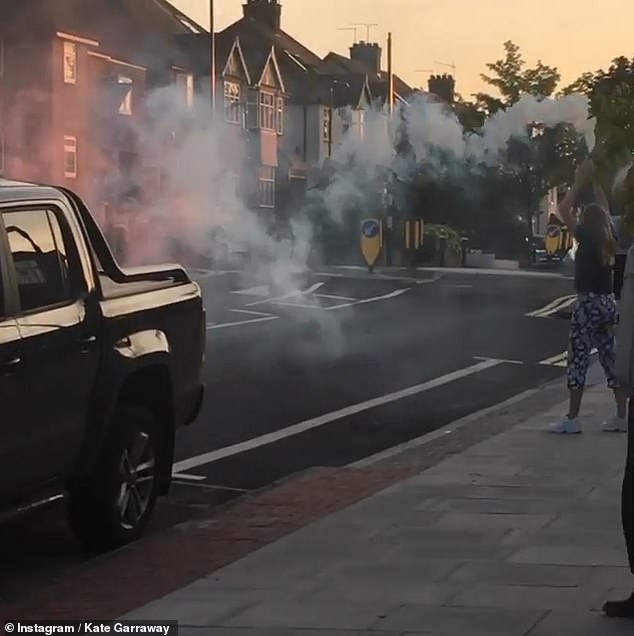 Amazing: Taking to Instagram Kate shared a video of her street once again applauding NHS staff with some even setting off colourful smoke flares in honour of Victory in Europe (VE) Day

'Have taken so much comfort & inspiration from the spirit of the country beautifully personified by Captain Tom these past few weeks.........and with VE Day tomorrow it's a reminder of the strength and resilience that we all have within us if we pull together and keep going.

'Derek is still with us, fighting so hard to beat this virus & everyday I am awestruck by how hard every member of the nhs team is fighting to turn things around & bring him ( & so many others) home to their loved ones.

'You are amazing - thank you thank you Sending love to you all in these terrible times #staypositive #hope #standtogether.' 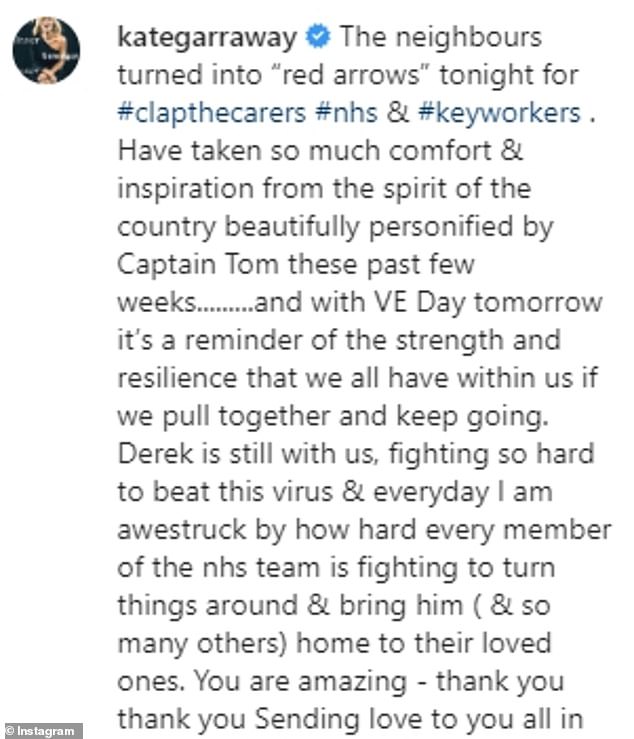 Still fighting: The broadcaster went onto praise NHS staff for caring for her husband and the nation during the pandemic

Kate donned a pale blue hoodie for the evening along with a pair of blue denim shorts and a pair of dark shoes as she stood outside her home to applaud NHS staff.

The broadcaster completed her look for the evening by styling her blonde locks into an updo.

The I'm A Celebrity... Get Me Out Of Here! star looked in good spirits as she clapped for the country's key workers.

It comes after Kate's Good Morning Britain co-host Ben Shephard said she is 'finding comfort' in talking to her husband every day as he continues to fight COVID-19.

Clap for carers: Kate cut a casual figure as she stood on the street outside her house and filmed her neighbours joining in the applause 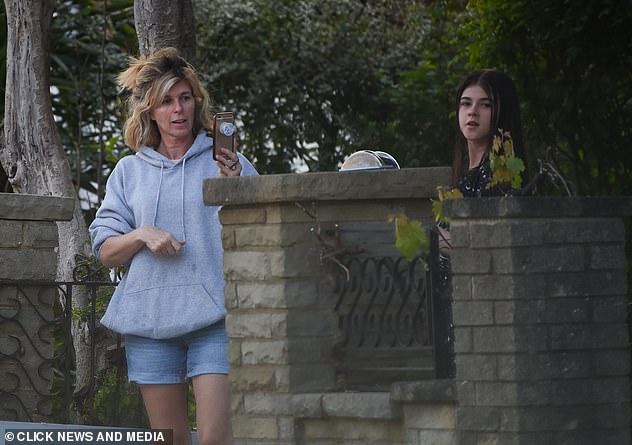 Family: Kate was joined by her daughter Darcey, 14, as she filmed the applause

Casual: The star was sporting a cosy grey hoodie and denim cut-off shorts as she documented this week's Clap For Carers

Derek Draper is understood to be in an unresponsive critical condition after being admitted to hospital with the deadly bug, which has so far claimed