Paris Jackson admits she 'never thought' she'd end up with a man after 'dating more women' in candid interview about her sexuality... and says dad Michael 'felt the energy' of her same-sex attraction when she was just 8 Paris Jackson has spoken about her sexuality in her new Facebook Watch series  In Unfiltered: Paris Jackson and Gabriel Glenn, the 22-year-old said she never imagined she'd 'end up with a dude' after dating 'more women than men'  Jackson began dating her The Soundflowers bandmate Gabriel in March 2019  Paris also insisted her father Michael Jackson 'felt the energy' that she was gay The King of Pop would 'tease... like, "You got yourself a girlfriend!" if I were staring at a magazine of a woman too hard' she recalled The incident occurred when she was 'so young, eight or nine'

Paris Jackson has given a candid interview on her sexuality in her new online series Unfiltered, during which she admitted she 'never thought' she'd end up dating a man.

The 22-year-old model has mainly dated women in the past but she is now in a relationship with Gabriel Glenn, and insists when it comes to her romances, it is more about what they are like as a person rather than 'what's in their pants'.

She said: 'Never thought I'd end up with a dude.' 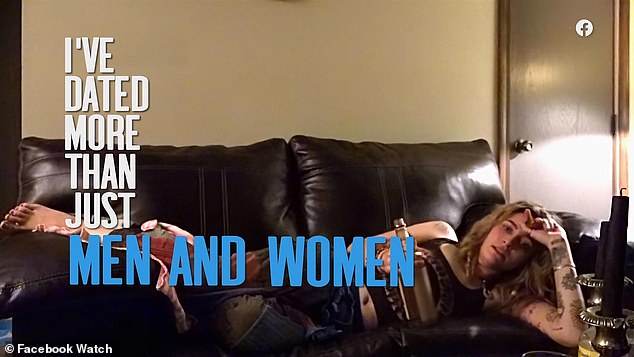 The model continued: '[I] thought I'd end up marrying a chick. I've dated more women than men. Been with more chicks.'

And Paris insists her father Michael Jackson 'felt the energy' that she was gay.

Speaking on her Facebook Watch show, Unfiltered: Paris Jackson and Gabriel Glenn, she added: 'I think he felt the energy and he would tease me the same way he'd tease my brothers, like, "You got yourself a girlfriend!" if I were staring at a magazine of a woman too hard.'

'I'm very lucky to have that, especially so young, eight