Kate Garraway has revealed she offered to donate her blood plasma to husband Derek Draper after they were both struck down with coronavirus.

The Good Morning Britain recovered from COVID-19 but her husband has been in intensive care since March.

Speaking on Monday's GMB, Kate explained she was keen to donate her blood plasma to Derek after her recovery  - a procedure encouraged by the NHS and the government. 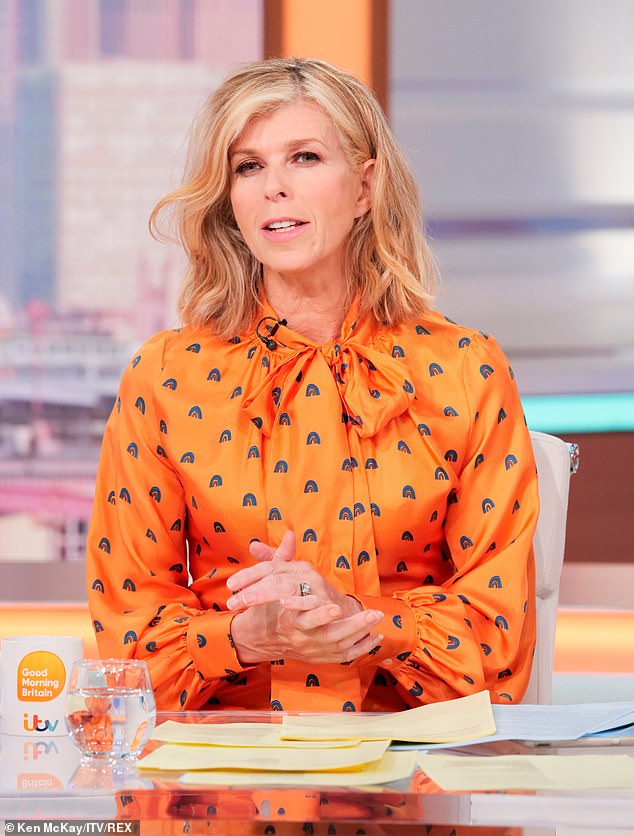 Help: Kate Garraway has revealed she offered to donate her blood plasma to husband Derek Draper after they were both struck down with coronavirus

While Derek is now free of coronavirus and came out of a coma last month, Kate told her GMB co-star Ben Shephard that she was wanted to help in any way she could when Derek's condition was at its most critical.

'Something I saw which intrigued me was this call out from the government for people to come forward to donate blood, so they can make use of blood plasma. Those who have had Covid and recovered,' she said.

'When Derek was very seriously affected by the virus - as in the virus was active, not as he is now - towards the end of April, I was looking for anything that might be able to help.'

Kate said she spoke to her husband's doctors, explaining: 'I said to the doctors, "Could I donate my blood? I've had it, I seem to have recovered. Would antibodies that I have be helpful to him?"' 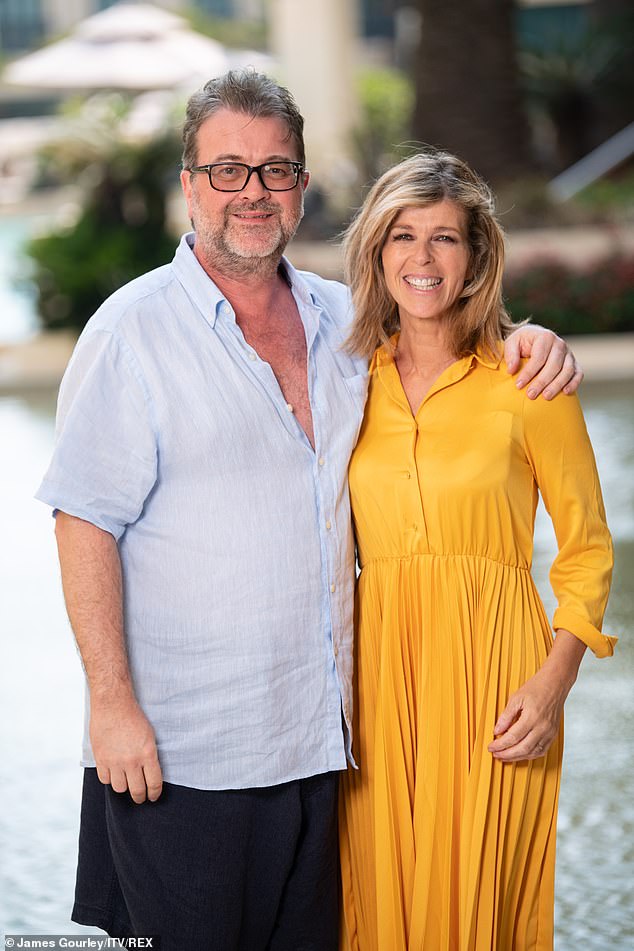 Support: The Good Morning Britain recovered from COVID-19 but her husband has been in intensive care since March (pcitured together in December 2019)

A timeline of Derek's coronavirus battle

Kate revealed she and Prince Charles had got 'relatively close' at the Prince's Trust Awards on March 11 - Charles was diagnosed with coronavirus in mid-March.

'He said he had a headache, numbness in his right hand, and was struggling to breathe,

'I rang Dr Hilary (Jones) and tried to get through, he talked to Derek. He said put me back on, I think you need to call an ambulance'

Derek, 52, was taken into hospital on March 30 and remained in an unresponsive condition.

Kate and her children isolated at home after she displayed 'mild symptoms'.

'I'm afraid he is still in a deeply critical condition, but he is still here, which means there is hope.'

Kate said: 'The journey for me and my family seems to be far from over as every day my heart sinks as I learn new and devastating ways this virus has more battles for Derek to fight.

That month, Kate and her family took part in the final clap for carers

She said: 'I'll never give up on that because Derek's the love of my life but at the same time I have absolute uncertainty'

On June 5, Kate revealed Derek is now free from coronavirus but continues to fight against the damage inflicted on his body

On July 5, Kate revealed Derek has woken from his coma but he remains in a serious yet critical condition.

On July 8, she announced she would be returning to GMB, after being urged by doctors to 'get on with life' during Derek's recovery.

She added that Derek had 'opened his eyes' after waking from his coma, but has been told his recovery could take years.

On July 13, Kate returned to GMB for the first time since Derek was hospitalised.

'They said, "We are months away from being able to be confident that we could, in a sense, clean your blood enough to make sure that only the good antibodies were going in."'

Kate asked GMB's doctor Dr Amir Khan if the UK is in a position where people could donate blood to family members who have coronavirus, admitting 'for anybody who has a relative who is sick, it just feels like something you could do to help'.

He said: 'Definitely. We all want to help people who are suffering from this virus. And convalescent plasma therapy, we are really encouraging people to come forward and donate plasma. Because we need more and more of it. Particularly if there is a risk of a second wave.'

'I really like this idea. It's one of these old-fashioned kinds of medical therapies that has come back. It was first used in the 1800s to treat children with diphtheria, and then again in the 1900s to treat Spanish flu.'

'The NHS and the government are really encouraging people who have tested positive for coronavirus, who have thought they'd had it in the past and perhaps have not had a test yet, to come forward and donate their plasma.'

'Their antibodies can be used in patients who are particularly unwell in hospital to help treat their infection.'

Kate then asked: 'That's great now, but why wasn't it used before?' He admitted the evidence has 'always been there' but the technology and the donations 'haven't always been there', and he believes it 'should've been used earlier'.

On Monday's show, Kate also revealed how her friend and fellow TV presenter Jeremy Kyle has helped her with childcare for her children Darcey, 14, and Billy, 11.

Kate explained her children have gone to stay with Derek's parents this week, but admitted she has taken precautions as her in-laws have been shielding since March.

'My children have gone for the first time to stay away from home - they've gone to stay with Derek's mum and dad,' she said. 'Derek's mum and dad have been shielding since the beginning of March because they both feel vulnerable.'

She added that her children isolated over several days before they went to visit and she washed and sealed Darcey and Billy's clothes before they travelled on Sunday.

Kate explained that she didn't want to travel with the children to their grandparents as she wanted to limit the people her in-laws have had contact with, so her friend Jeremy stepped in.

'It was thanks to Jeremy Kyle that they travelled up - big thanks to him. Because he said, "Listen, my driver has been isolating and has been keeping the car very clean so I'll take the children up." Very, very kind of him, thank you very much Jeremy.' 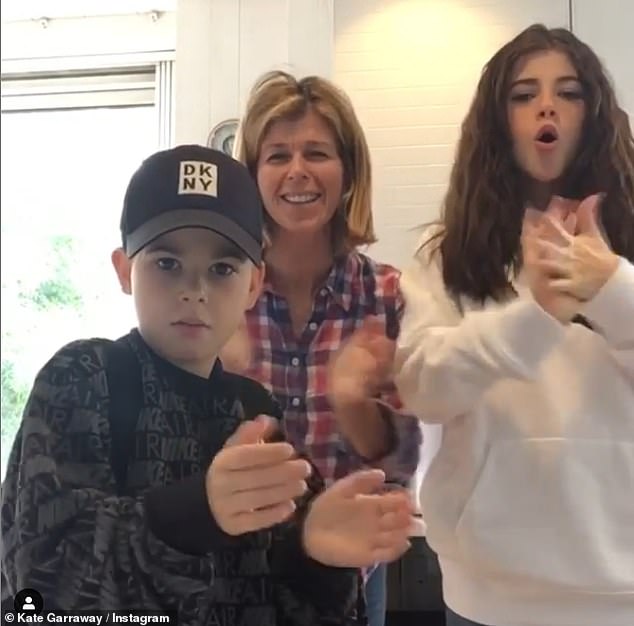 Family: On Monday's show, Kate also revealed how her friend and fellow TV presenter Jeremy Kyle has helped her with childcare for her children Darcey, 14, and Billy, 11

Last week Kate revealed she paid an 'extra emotional' first visit to Derek, as he continues to slowly recover from COVID-19.

The Good Morning Britain presenter, 53, also told Ben Shephard that it was 'lovely' to see her partner as (28 July) was his 53rd birthday, but she continues to be 'frustrated' by his slow progress.

Kate told Ben: 'I did go and see Derek, he's had a tough couple of weeks, and it's just frustrating, it would have actually been his birthday today so I was extra emotional so I was thinking about the day he was born.

She added: 'What the doctor said to me was, "Sometimes, Kate, a day when nothing has gone backwards is a positive".'