The Bachelor's most BRUTAL dumping ever: Locky Gilbert snaps at Juliette Herrera and sends her packing after her bratty rant about TikTok stars and LA rappers 'sliding into her DMs'

Outspoken Bachelor star Juliette Herrera made an unforgettable exit from the show on Wednesday's episode.

The 34-year-old stylist ranted at Locky Gilbert about ignoring 'DMs' from other men because she was saving herself for him - only to be brutally dumped moments later.

Fans couldn't believe what they were watching, with hundreds flocking to Twitter to talk about Juliette's surreal departure. 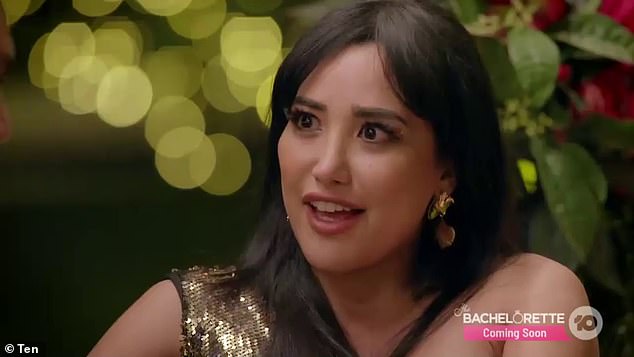 'Juliette has surprisingly become the MVP,' another added, while a third commented: 'Juliette for the Bachelorette 2021.'

Just before being sent home, Juliette confronted 31-year-old Locky about not having had a single date with him.

'What a queen!' Fans couldn't believe what they were watching, with some flocking to Twitter to talk about the drama

But before he had a chance to explain himself, she launched into a cringeworthy rant about the fact she was ignoring direct messages on Instagram for him.

'I messaged you and tried to reach out to you,' Juliette said.

'I thought, does he know

PREV Baby joy for Gigi Hadid and Zayn Malik! Model's father Mohamed shares sweet ...
NEXT Alesha Dixon believes having BGT forced off the air could 'work in the favour' ...