The star-studded evening brought the best of country music together and featured performances spread across three iconic Nashville venues.

Country duo Dan + Shay were one of the evening's first big winners for Duo of the Year. 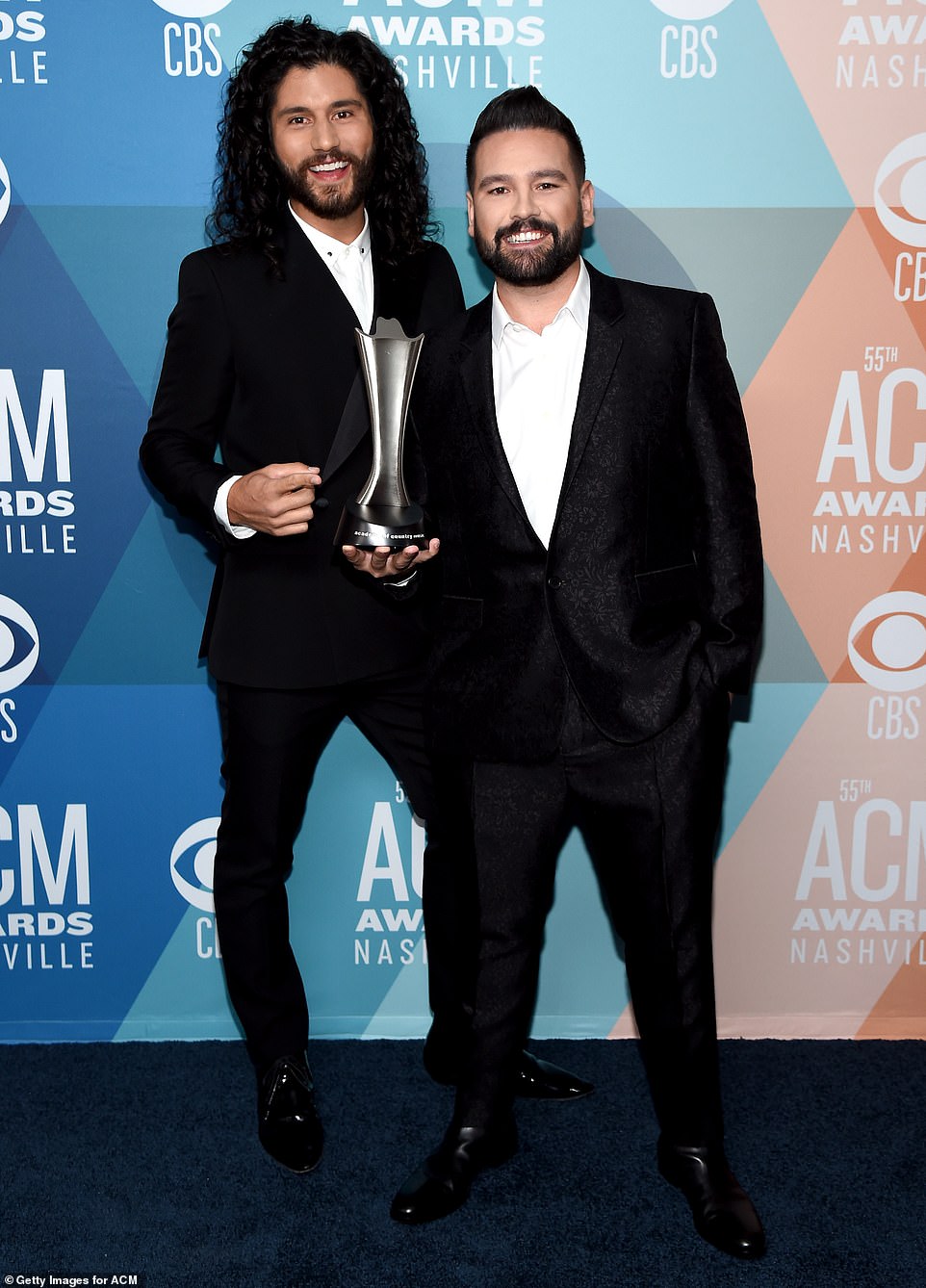 Best duo: Dan + Shay started off the 55th Annual Academy of Country Music Awards in Nashville with their win for best duo; shown September 14 in Nashville

'What a great way to start off the night,' Dan Smyers began his speech, before noting that it was his wife's birthday.

Dan + Shay were also nominated for Song of the Year for 10,000 hours, which featured Justin Bieber.

The country group Old Dominion were the ultimate winners for their track One Man Band.

'Songwriting is what got us here. This is not what I thought I would say but we're sitting here in this empty room and I can hear Andrew, our friend that passed away. I can hear him saying, "I know who you are." Like he used to yell that at us,' he said, before remembering other people close to the band who had passed on.

'They are so proud. And this is such an honor to receive this in their presence. Thank you for this.' 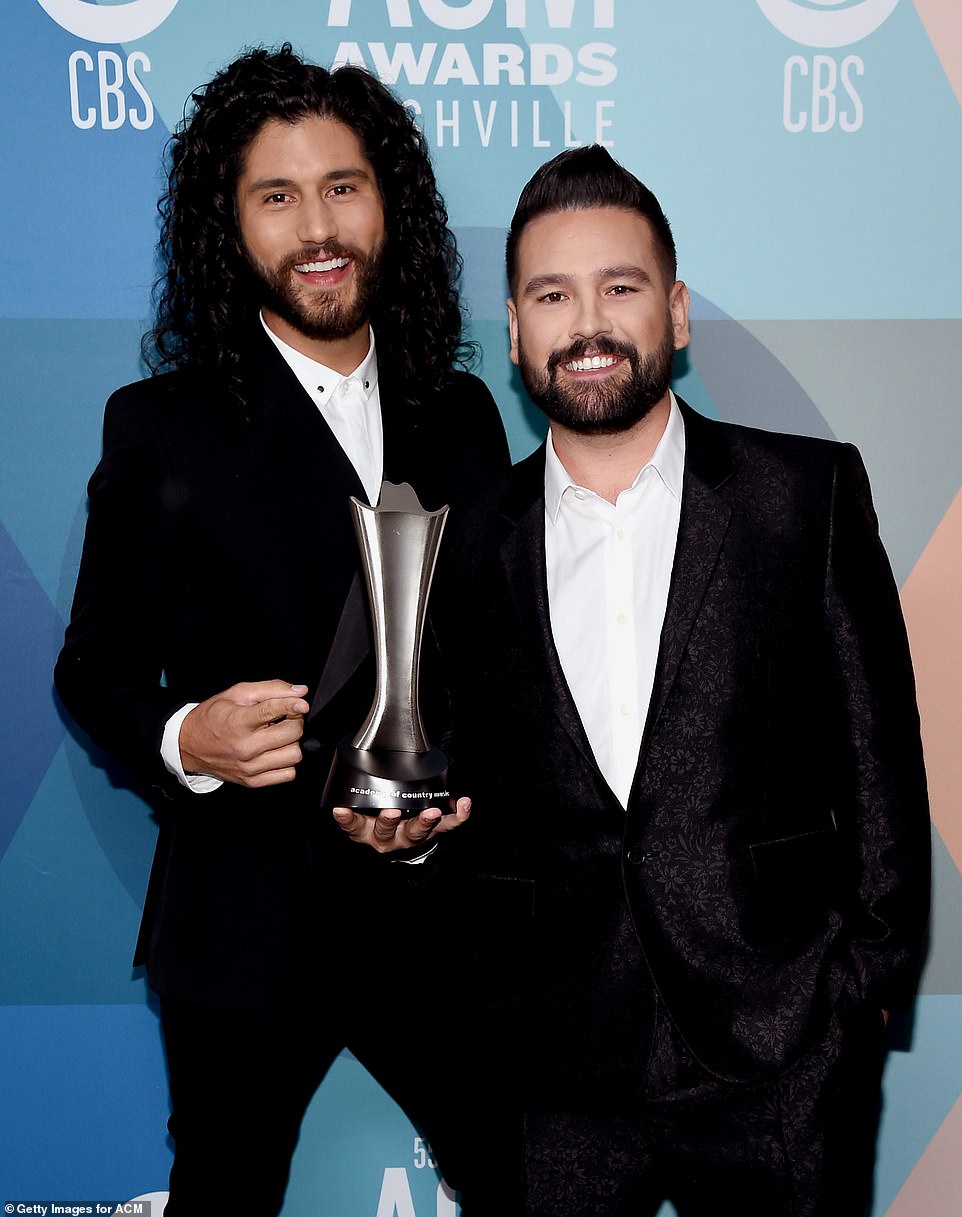 Missed chance: Dan + Shay were also nominated for Song of the Year for 10,000 hours, which featured Justin Bieber 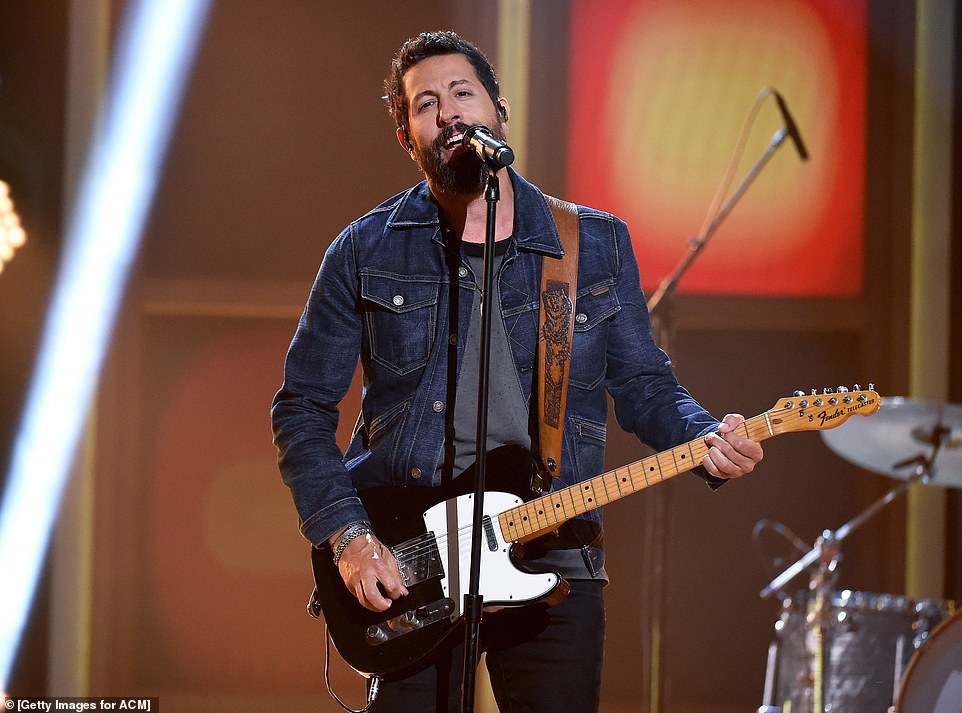 Big win: Country group Old Dominion took home the award for Single of the Year for One Man Band 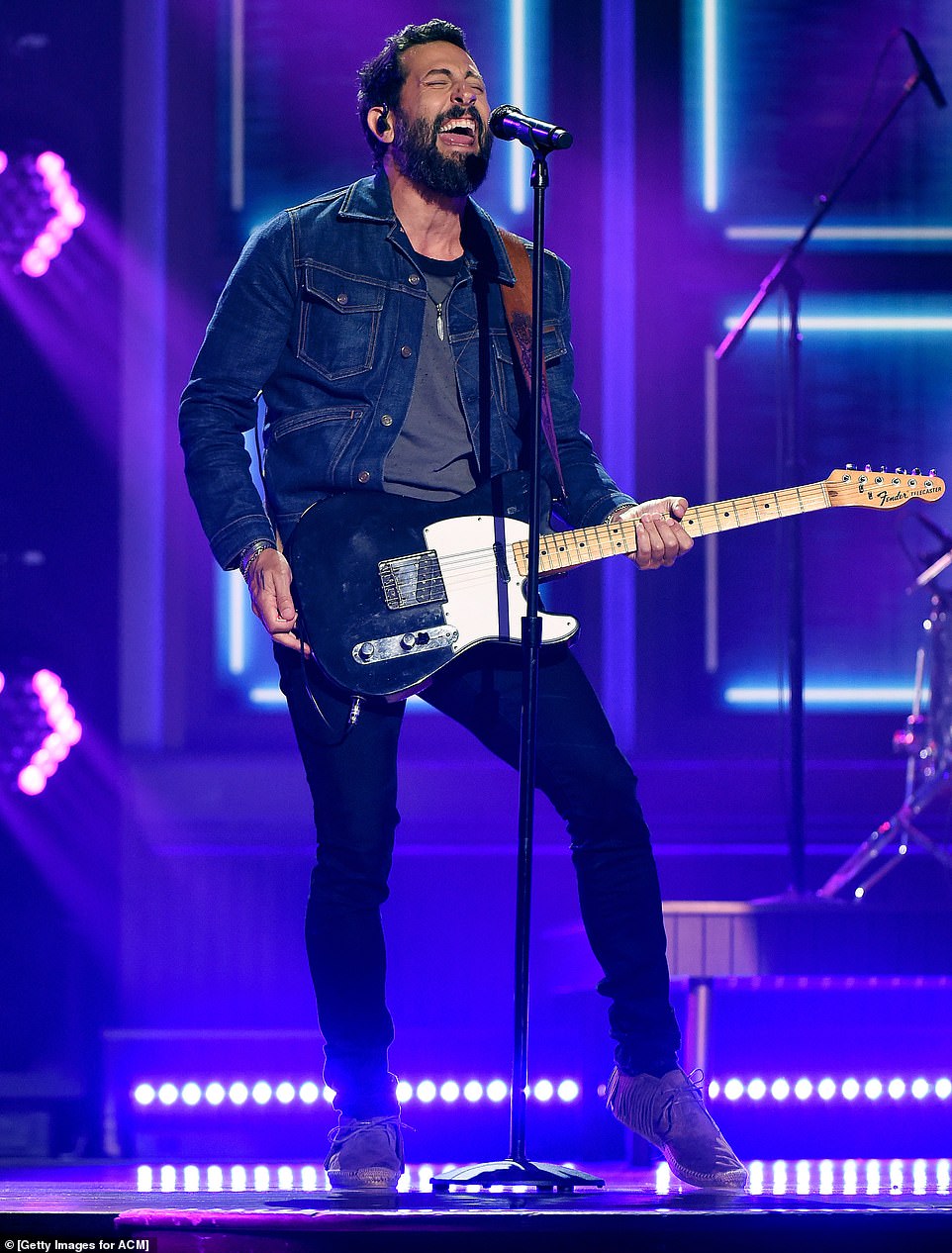 'This is not what I thought I would say but we're sitting here in this empty room and I can hear Andrew, our friend that passed away,' said singer Matthew Ramsey. 'I can hear him saying, "I know who you are"'

Old Dominion were back on stage later to accept the award for Group of the Year.

Singer Matthew Ramsey returned to shout out the group's road crew, who haven't been able to work with them much as the ongoing coronavirus pandemic has shut down most live performances.

'I think everybody here would be okay if I sent this one out to our road crew who really is getting hit hard right now in these weird times,' said Ramsey.

'We love you guys, you work so hard for us. We could not do this without you.' 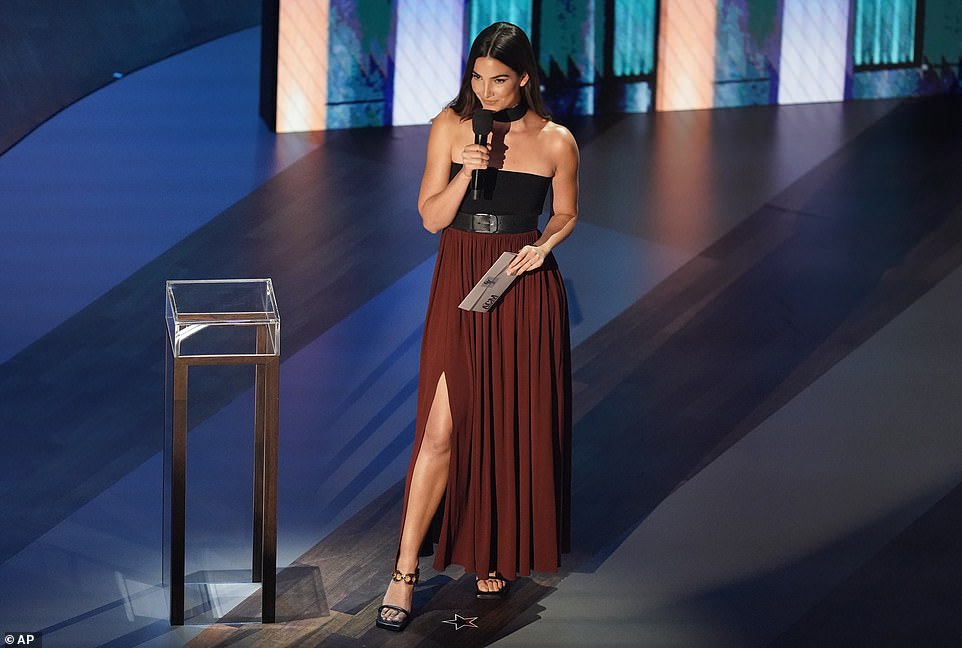 Leggy display: Lily Aldrige presented the awards for Group of the Year 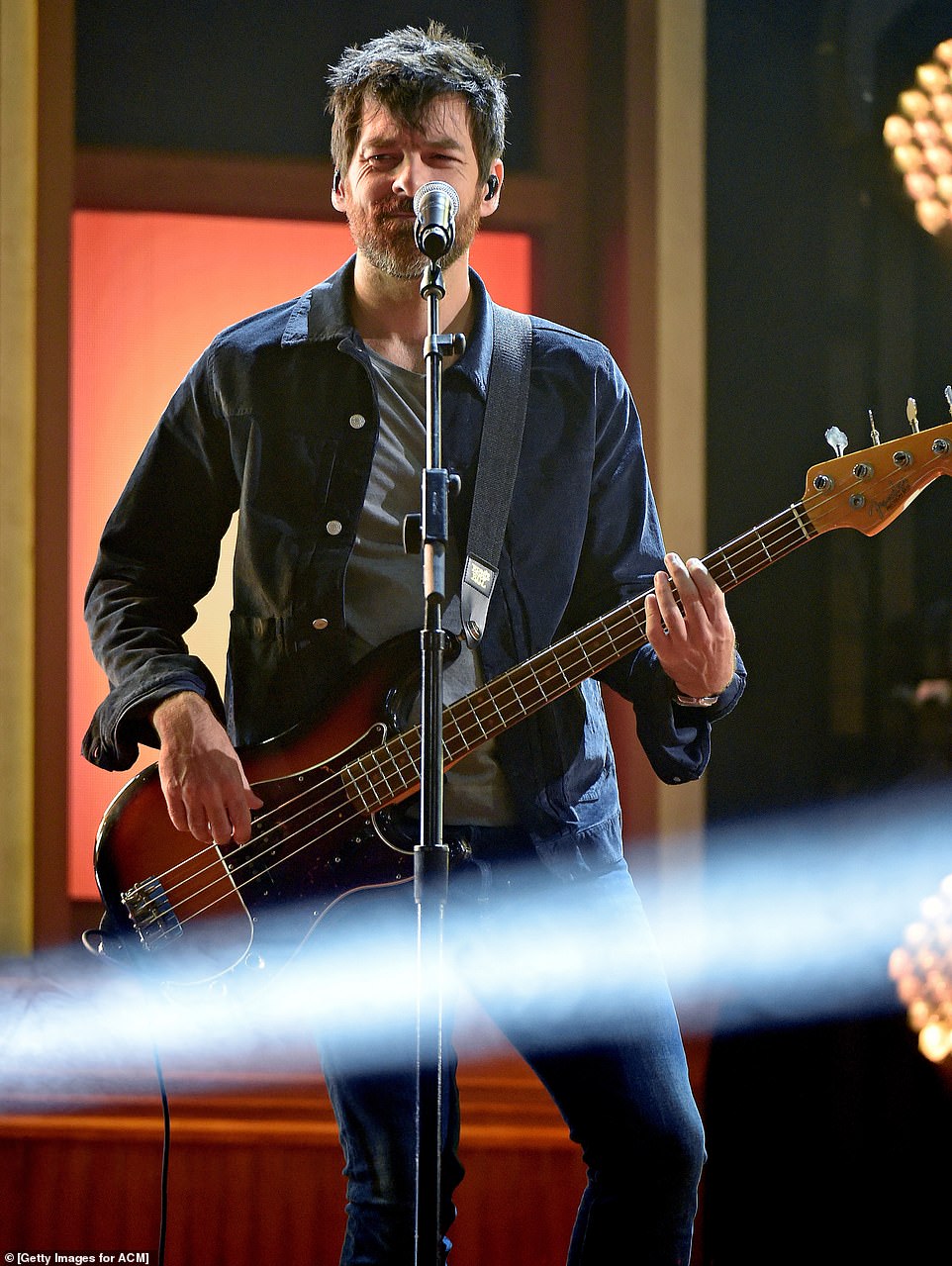 Behind-the-scenes heroes: 'I think everybody here would be okay if I sent this one out to our road crew who really is getting hit hard right now in these weird times,' said Ramsey; Old Dominion bassist Geoff Sprung pictured

Miranda Lambert was one of the early ACM winners for her collaborative song Fooled Around And Fell In Love.

Miranda and her fellow singers were presented with the Music Event of the Year award Monday on CBS This Morning.

The songstress released the single ahead of her Roadside Bars & Pink Guitars tour, where each of her collaborators also performed. 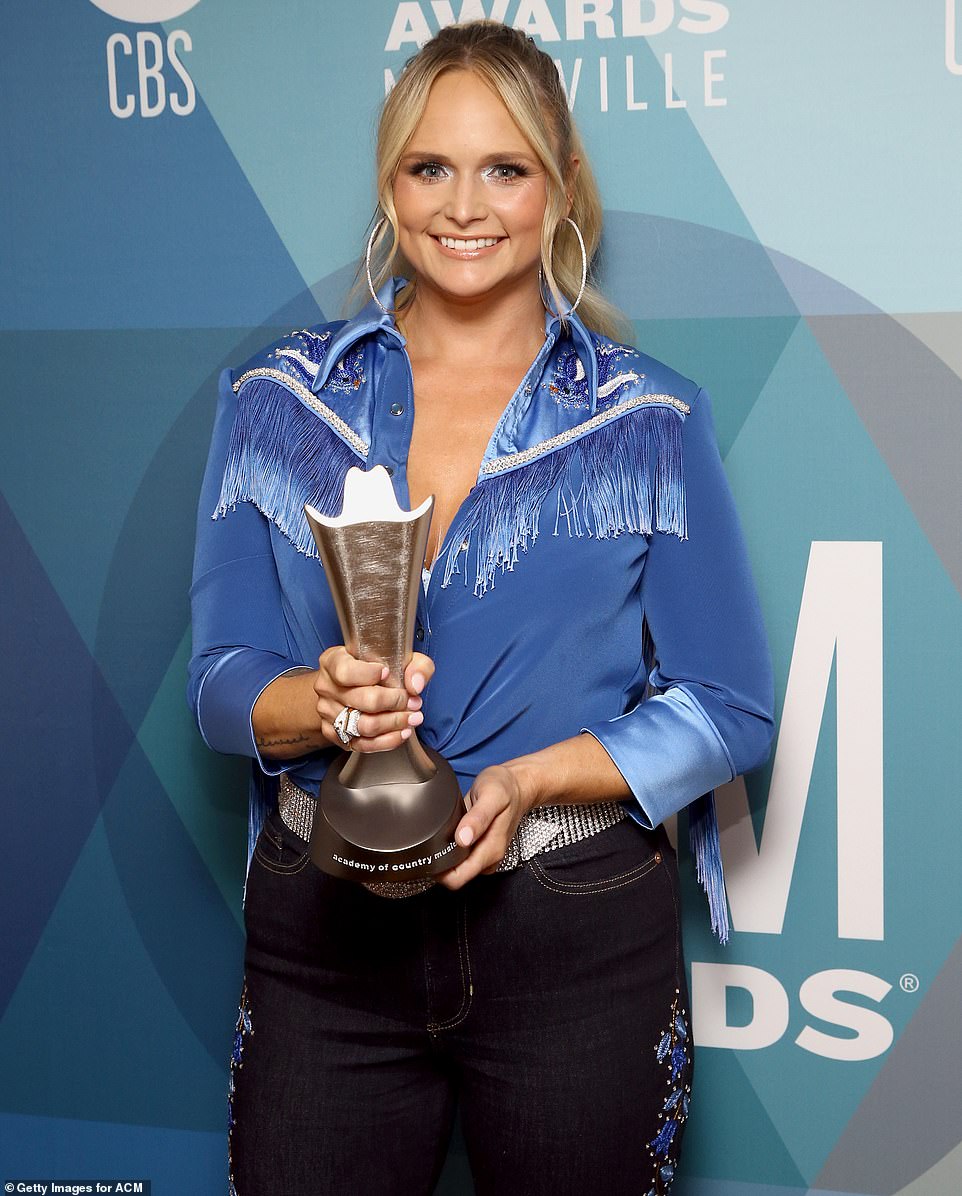 Advance notice: Miranda Lambert won Musical Event of the Year on Monday, which was presented early on CBS This Morning

Townes, who hails from Canada, has already released three albums, including her newest, The Lemonade Stand, which was released in June by the prestigious Columbia Nashville label.

She also shared the Music Event of the Year award with Miranda Lambert.

Although Green has recently been getting acclaim in the US, she released her first album back in 2011, when she was only 17 years old. 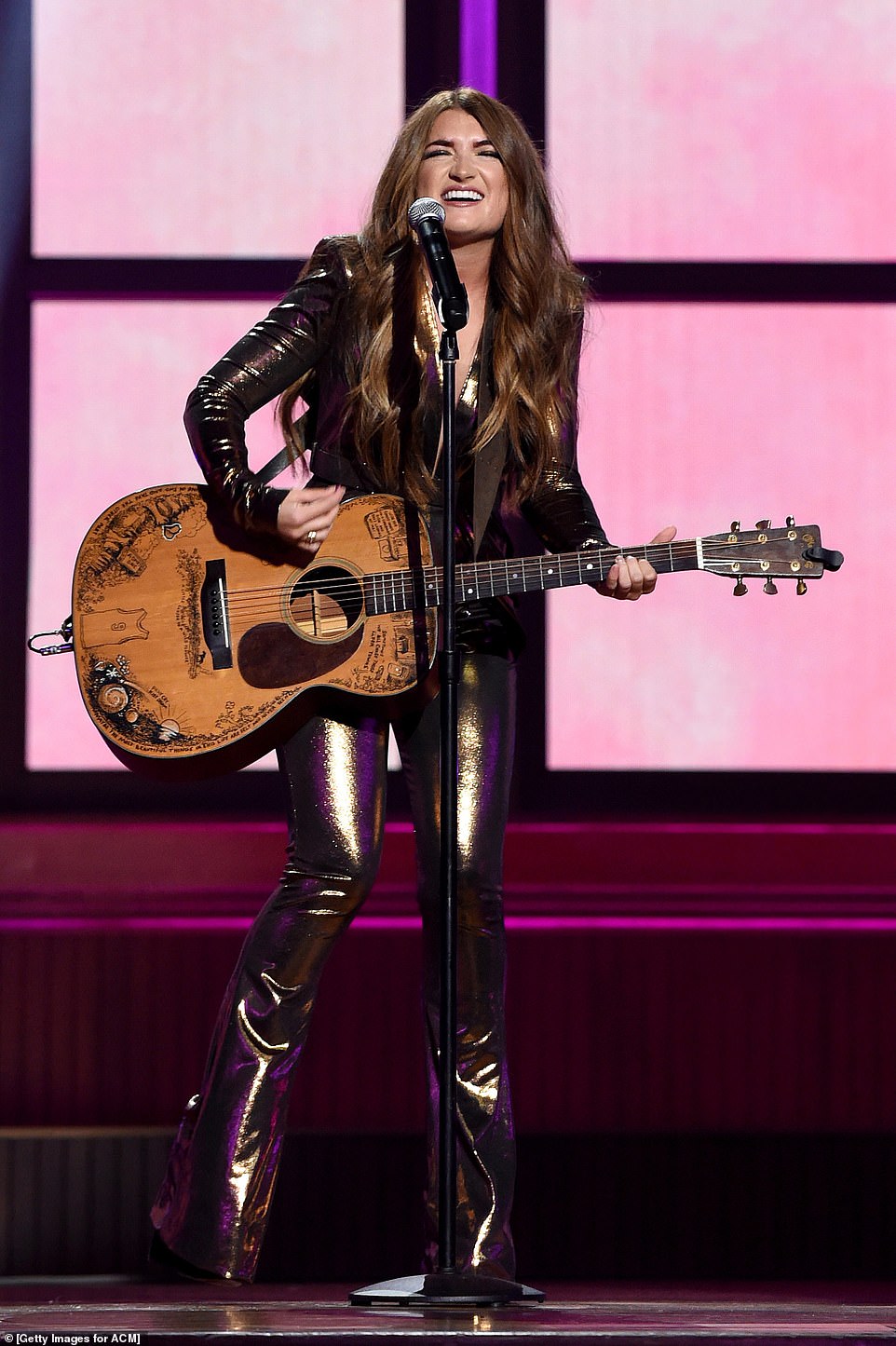 He performed his moving song I Wish Grandpas Never Died at the ceremony.

'This award is such an honor. But I wouldn't be where I am without a lot of help. I want to thank the fans, country radio, my team here in Nashville, my family and friends back home, and most of all the two men that inspired me to write this next song. Buford Green and Lendon Bonds, this one's for you,' he concluded, referencing his two grandfathers.

As there was a five-month delay due to the coronavirus pandemic, the award show wanted to bring the live television experience back again so there aren't any fake fans, canned applause or pre-taped acceptance speeches.

The awards, normally held in April in Las Vegas, were delayed this year and moved to Nashville, Tennessee, for the first time. But while other music award shows have tried a hybrid of virtual stages, music video-style performances or at-home shows, the ACMs will be broadcast on CBS from three indoor stages in Nashville, Tennessee. 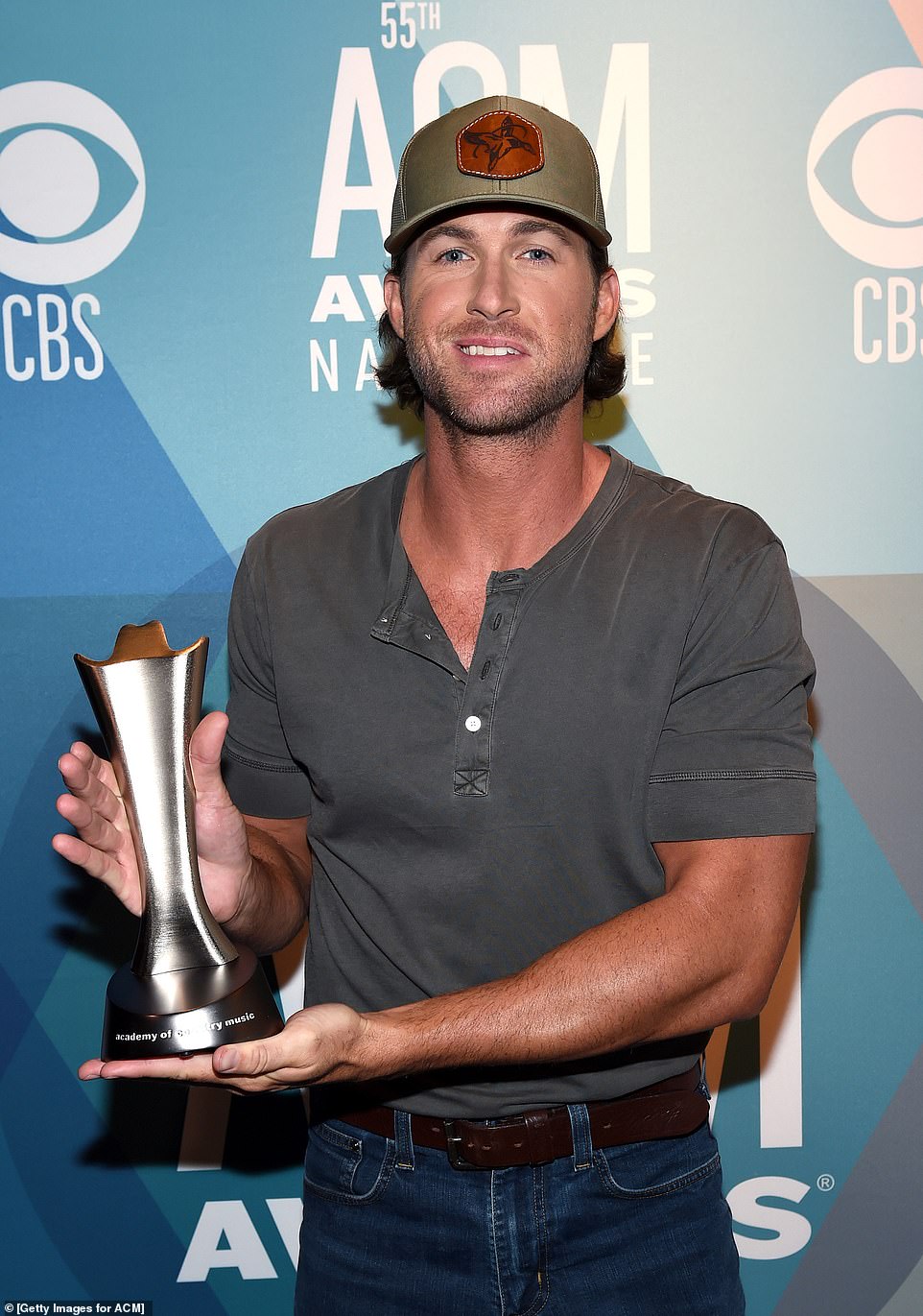 'We've tried to maintain, for lack of a better word, the normalcy of what we do at the ACM Awards, which is presentations of lot of live performances on stages,' said R.A. Clark, who is in his 21st year as executive producer of the show.

The performances, some of which are pre-taped, span three historically important stages in country music history, but none will be open for fans.

The smallest, the Bluebird Cafe, accommodated only about 90 people pre-pandemic and the venue helped to start the careers of Garth Brooks and Taylor Swift, among many others. Miranda Lambert will sing the aptly titled Bluebird from the small stage, with other performances from Tim McGraw, Jimmie Allen and Luke Combs.

The Ryman Auditorium, an early landmark for gospel and bluegrass as well as country, will feature performances by Maren Morris, Thomas Rhett with Jon Pardi and Kelsea Ballerini.

Even Taylor Swift is making her return to the ACMs after seven years with a performance from her new album Folklore, which has spent six weeks at No. 1 on the Billboard 200 Albums chart. Swift will perform at the Grand Ole Opry House, the center of operations for the live broadcast where host Keith Urban and presenters will give out the awards. Clark said that's what is setting this pandemic awards show apart from others.

'Hearing the winners and having live acceptance speeches is essential,' said Clark. 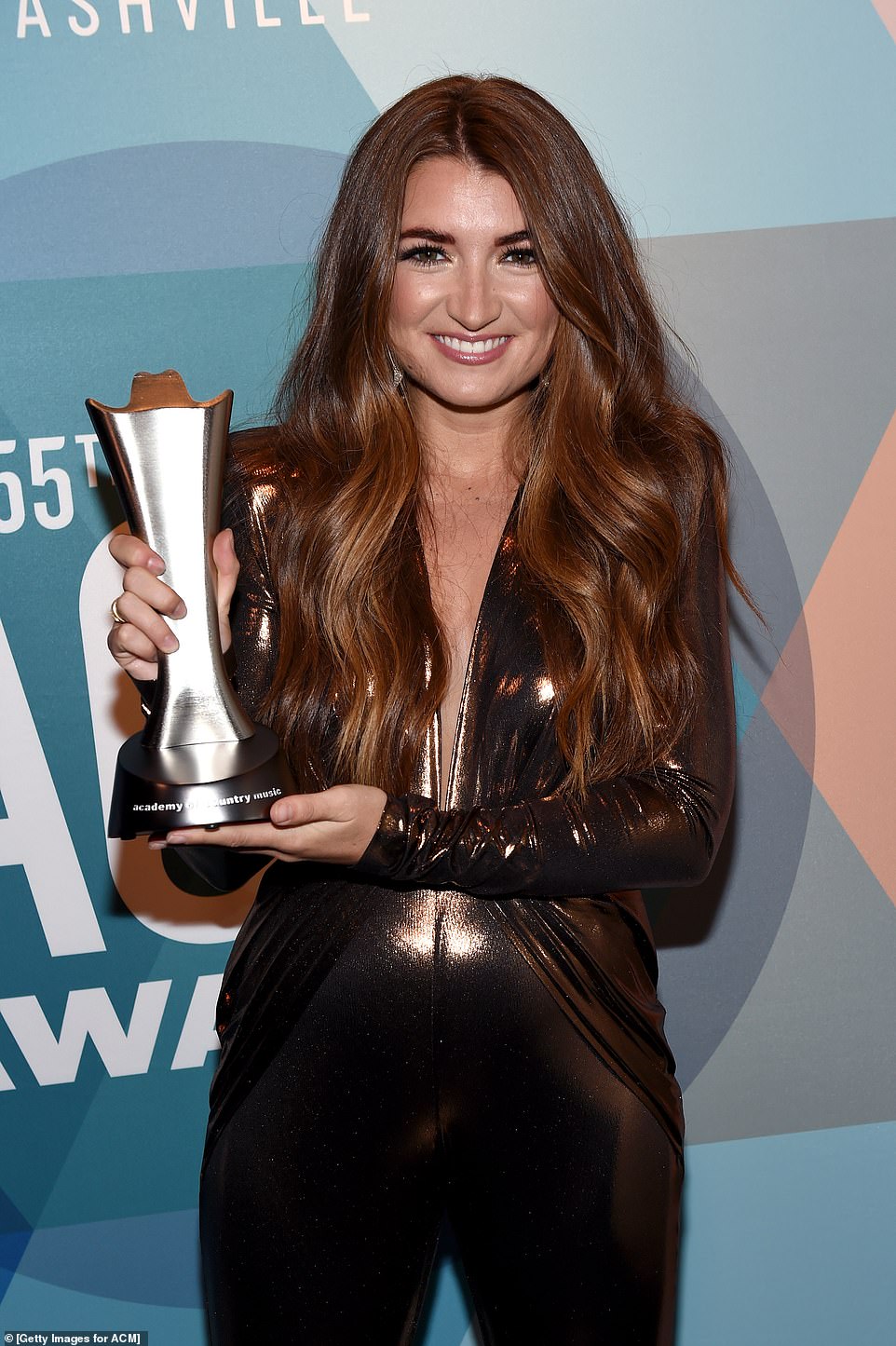 A whole new department focusing on COVID-19 precautions and regulations has been added by Dick Clark Productions.

Whether they're a guitar tech, a grip, an artist or a producer, everyone who enters any of their venues has to take a COVID-19 test, wear a mask and get their temperature

Vicky Pattison reveals a woman SPAT on her while she was doing a photoshoot in ...