Chrissy Teigen took to Instagram Monday evening after receiving a pair of blood transfusions, reassuring her fans, 'baby and I are completely fine.'

Teigen, 34, wrote Monday, 'Hello from hospital. about to have my second blood transfusion which truly truly truly sounds more dramatic than it is.'

She continued: 'It’s an IV, but instead of fluids, the blood of some kind human being out there. Baby and I are completely fine, just missing the little things like walking...cooking...playing with the other buttbutts.' 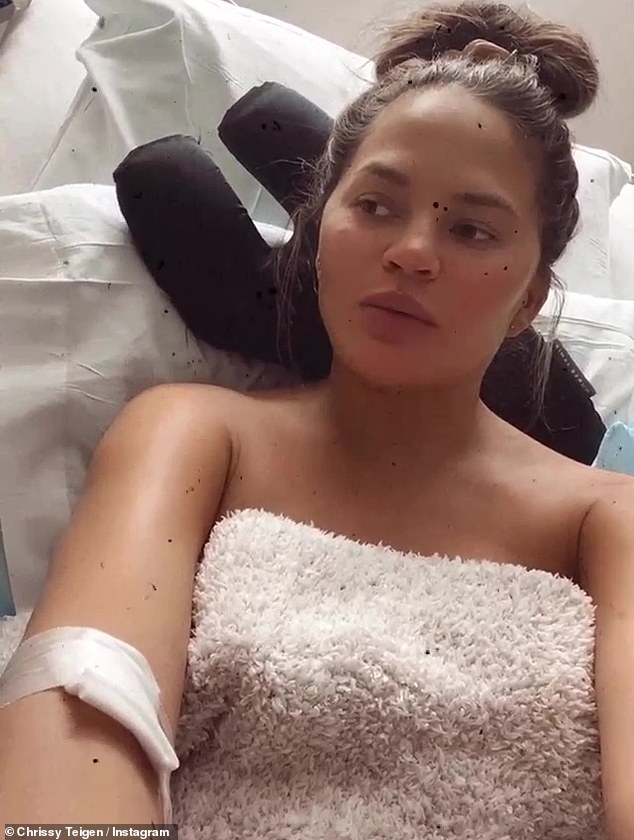 The latest: Chrissy Teigen, 34, took to Instagram Monday evening after receiving a pair of blood transfusions, reassuring her fans, 'baby and I are completely fine'

The Utah-born star shared a shot from New Year's Eve last year in which she was looking glum, joking, 'came across this little gem from ringing in 2020. It all makes sense now!'

Teigen - who is expecting her third child, a baby boy, with husband John Legend - was hospitalized on Sunday evening at Cedars-Sinai Medical Center in Los Angeles after a month of bleeding.

Teigen took to the app earlier Monday as she relaxed in her hospital room watching Real Housewives with Legend at her side. As a hospital alarm rang off, she joked, 'Soothing sounds at the hospital.'

She later said that she got a blood transfusion and said 'it's just like an IV.' 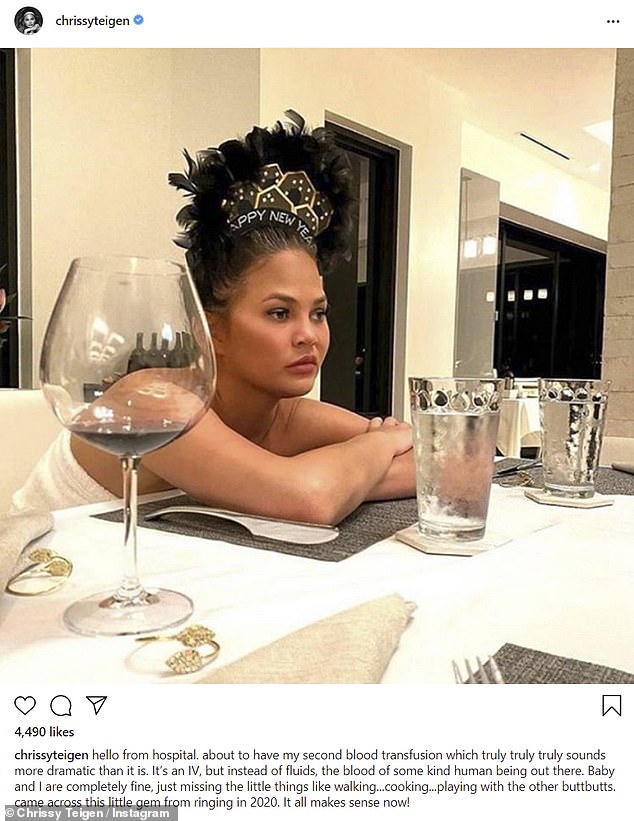 2020 continues: The Utah-born star shared a shot from New Year's Eve last year in which she was looking glum, joking, 'came across this little gem from ringing in 2020. It all makes sense now!' 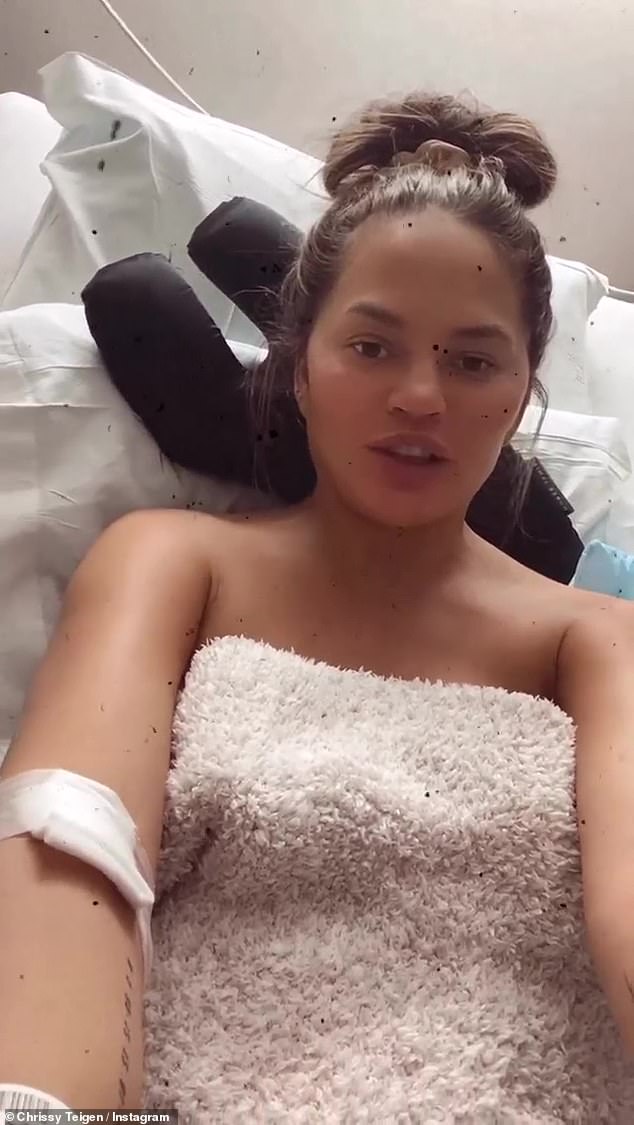 Teigen - who is expecting her third child, a baby boy, with husband John Legend - was hospitalized on Sunday evening after a month of bleeding

The model had already been on strict bed rest this month but as she explained in a series of Instagram Stories on Sunday, her bleeding had worsened.

Chrissy begged her followers not to try and diagnose her over Twitter as she explained more about her condition.

'We all know I've been on bed rest for a few weeks and that's like super serious bed rest. I get up to pee and take baths twice a week, no showering, just as little as possible,' Chrissy began. 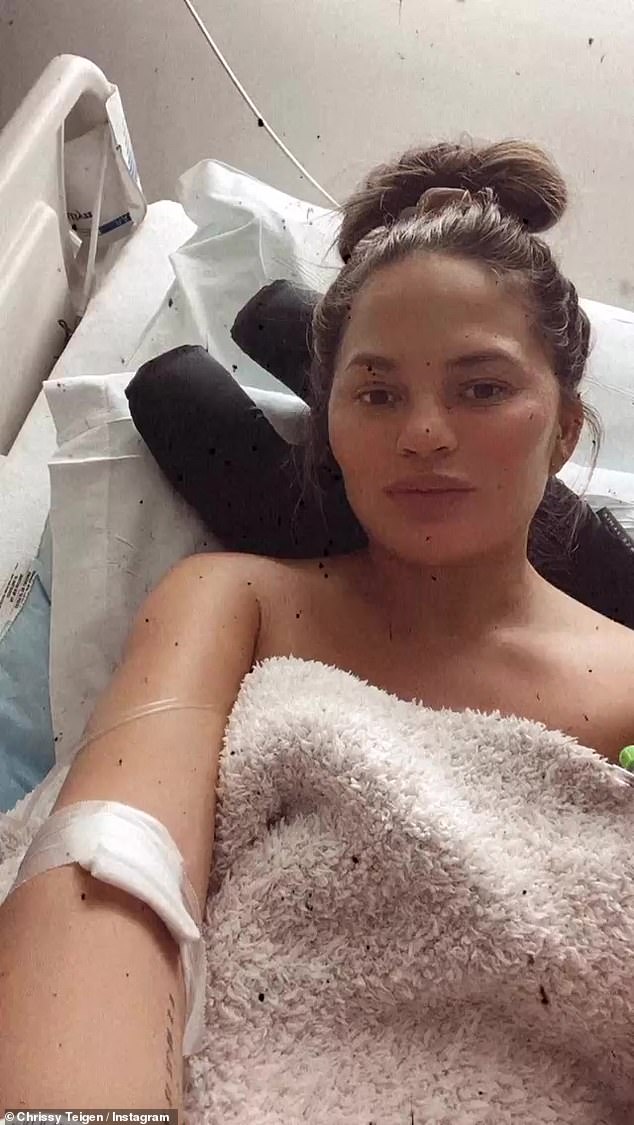 She said of her treatment, 'It’s an IV, but instead of fluids, the blood of some kind human being out there' 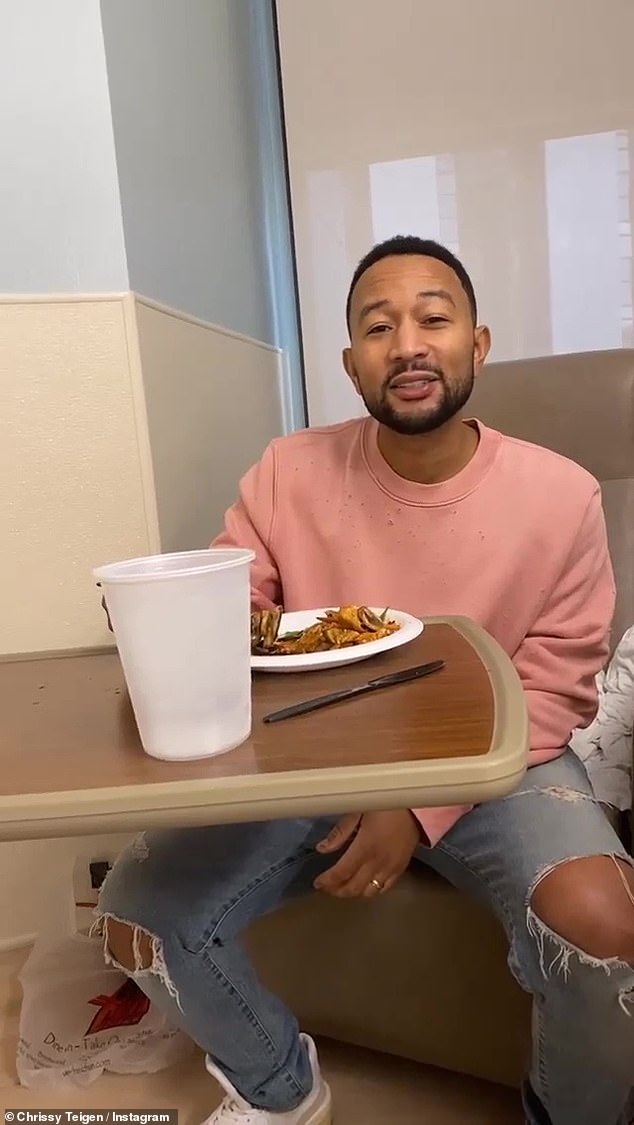 Supportive: Legend was eating a meal in the hospital room, there for his wife

'But I was always, always bleeding. I'm about halfway through pregnancy and the blood has been going on for about a month, maybe a little bit less than a month. We're talking about more than your period girls, it's definitely not spotting. A lot of people spot but it's usually fine. Mine was a lot.'

Chrissy went on to explain that on Sunday her bleeding worsened comparing it to 'like if you were to turn a faucet onto low and leave it there...It was at the point today where it was never stopping, the bleeding.' 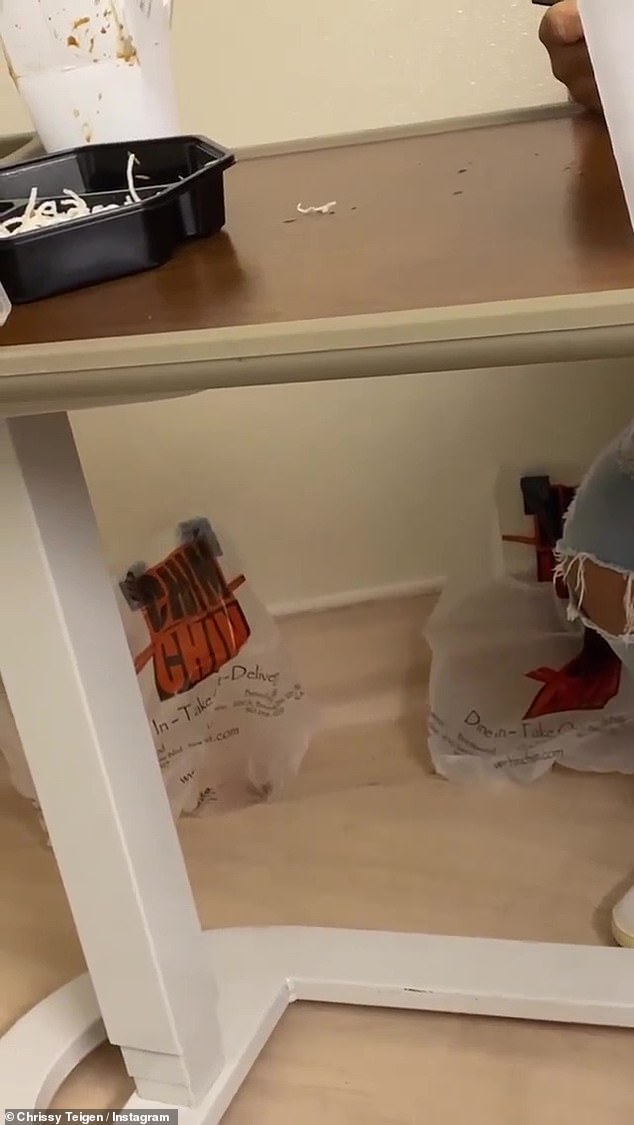 Leftovers: The star panned out and showed takeout containers in the hospital room 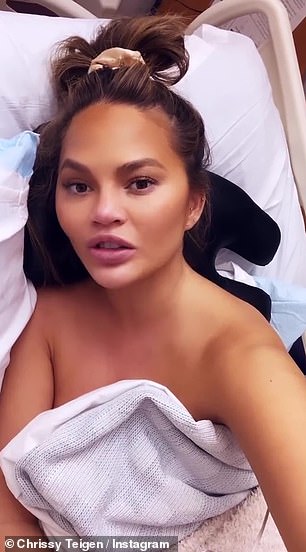 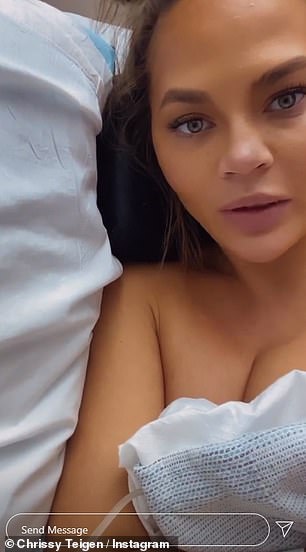 Hospital: Chrissy Teigen has given her followers an update on her pregnancy, revealing she was hospitalized on Sunday evening after bleeding for the past month

She added that she was feeling great, telling her fans 'it's so weird because I feel really good. I'm usually at my happiest pregnant, mood wise. That's why it's so hard for me to come to terms with.'

Chrissy also beamed as she revealed her baby was doing well, explaining: 'In the simplest of terms we can say my placenta is really, really weak, So I feel really good and the baby is so healthy, growing stronger than Luna or Miles.'

'So his house is like falling apart. It didn't have a good foundation to begin with, he didn't have the strongest chance at the very, very beginning so all we're doing now is trying to make sure he has a lot of fluid around him and I'm resting as much as possible.' 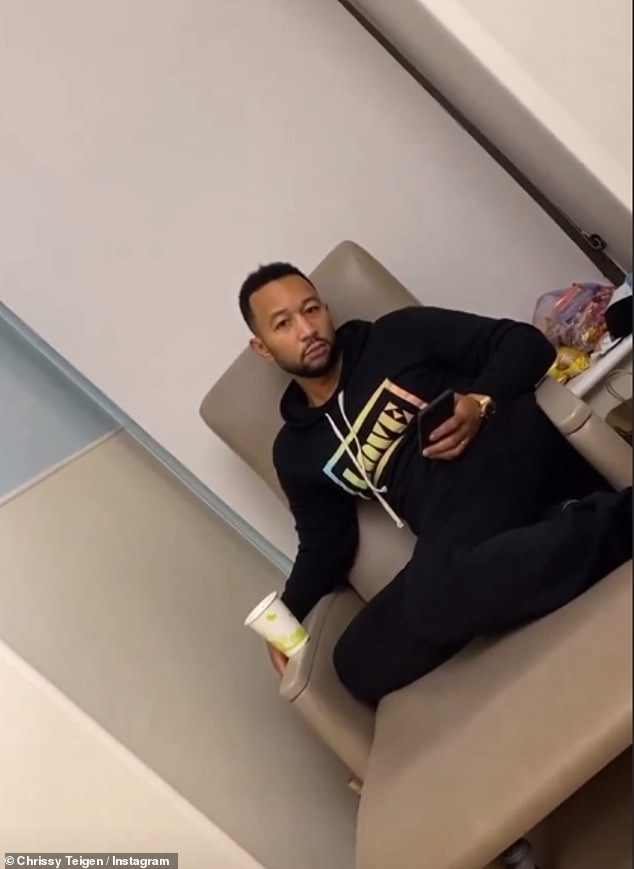 By her side: Chrissy revealed her husband John Legend was with her. The couple are expecting their third child, a baby boy 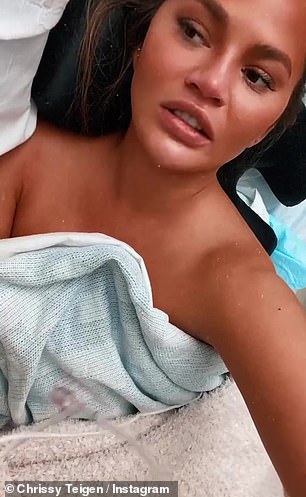 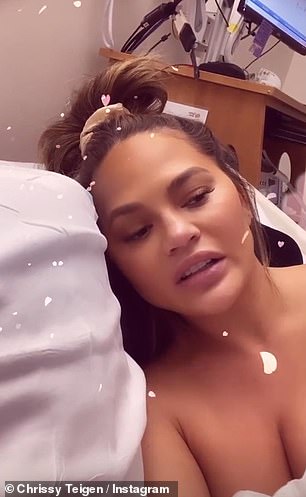 Scary: 'Everytime I go to the bathroom it would be blood, and honestly just laying there there would be blood,' she told her followers, adding that her baby though is 'the strongest, coolest little dude'

What is a blood transfusion?

The NHS writes: 'A blood transfusion is when you're given blood from someone else (a donor). It's a very safe procedure that can be lifesaving.

'A blood transfusion may be needed if you have a shortage of red blood cells.

'This may be because your body's not making enough red blood cells or because you have lost blood.

'For example, you may need a blood transfusion if you have

'a type of cancer or cancer treatment that can affect blood cells – including leukaemia, chemotherapy or stem cell transplants

PETER HITCHENS: Let's turn back time - to when we didn't mess up our clocks