He's become beloved to Line Of Duty fans for his role as Terry Boyle in BBC's ratings juggernaut Line Of Duty.

And Tommy Jessop has revealed how he did much of his own stunts on the action-packed series, including when Terry almost drowned after being targeted by corrupt cop Ryan Pilkington.

Appearing on Monday's episode of Good Morning Britain, co-host Sean Fletcher asked the actor, 36, who has down syndrome, asked: 'Did you have a stunt double?' 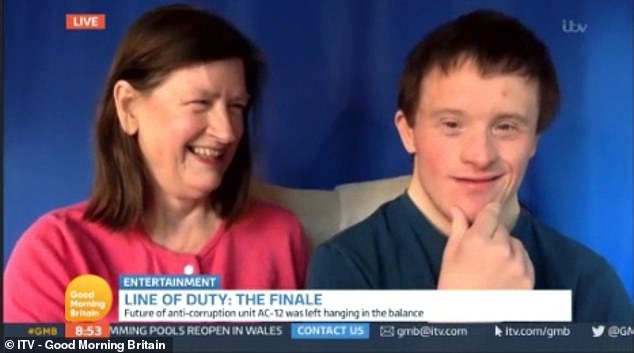 Show: Tommy Jessop has revealed how he did much of his own stunts on Line of Duty, including when Terry almost drowned after being targeted by corrupt cop Ryan Pilkingto

Tommy said: 'I mostly did the lake scenes by myself but I did have a body double when Ryan pushed Terry out of the water.'

He added: 'At one point in the lake scene, it was like living in a freezer in Antarctica.'

Asked if he knew who 'H' was ahead of time, Tommy said: 'I had a feeling I knew who H was. I kind of had… Jed (Mercurio) really does keep things top secret until the very