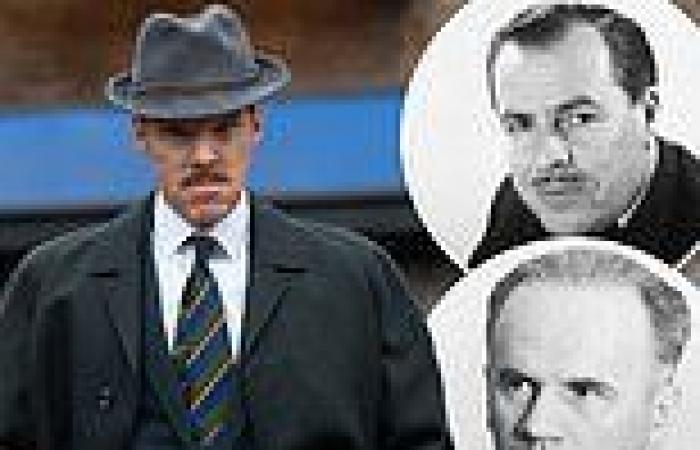 Cold War Budapest in 1962 was not the most welcoming place for a British businessman, but Greville Wynne was feeling rather pleased with himself.

He had just finished a successful day pouring booze down the throats of Hungarian trade fair delegates as he showed off the best of UK engineering in his job as a foreign trade negotiator.

What the Hungarians didn’t know as he showed them around his mobile exhibit, a pair of caravans, was that one concealed a tiny space just big enough for a man to lie down in it. That space was reserved for Oleg Penkovsky, a Soviet military intelligence colonel and British double agent whose information is credited with ending the Cuban missile crisis and even altering the entire course of the Cold War. 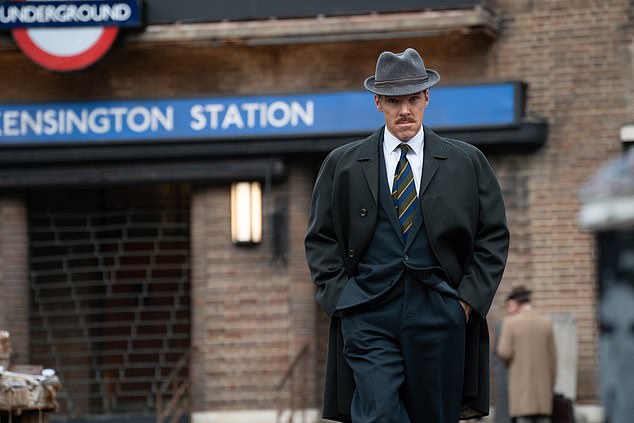 The Courier is a new feature film, starring Benedict Cumberbatch, pictured, as Wynne 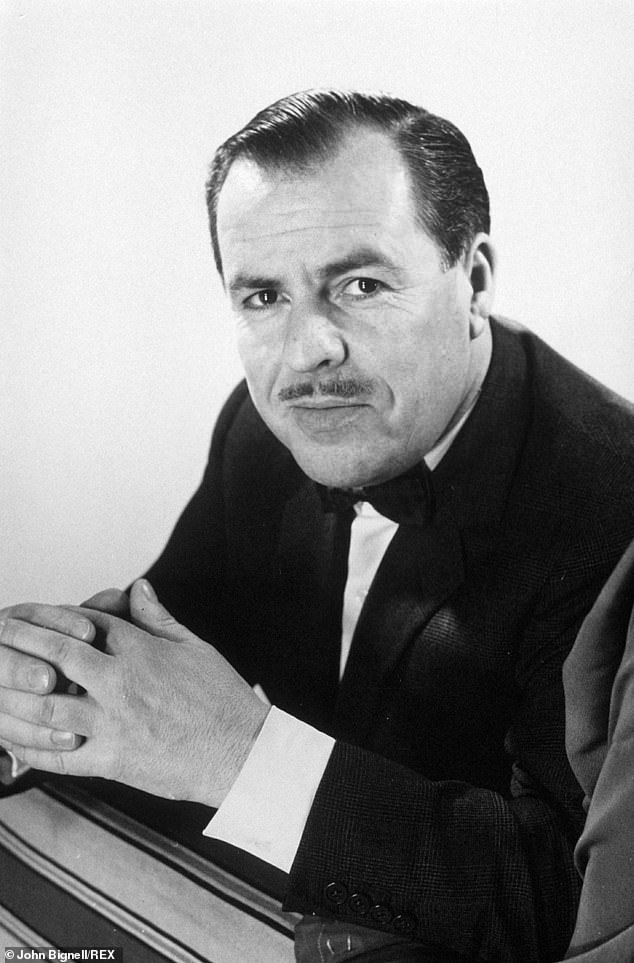 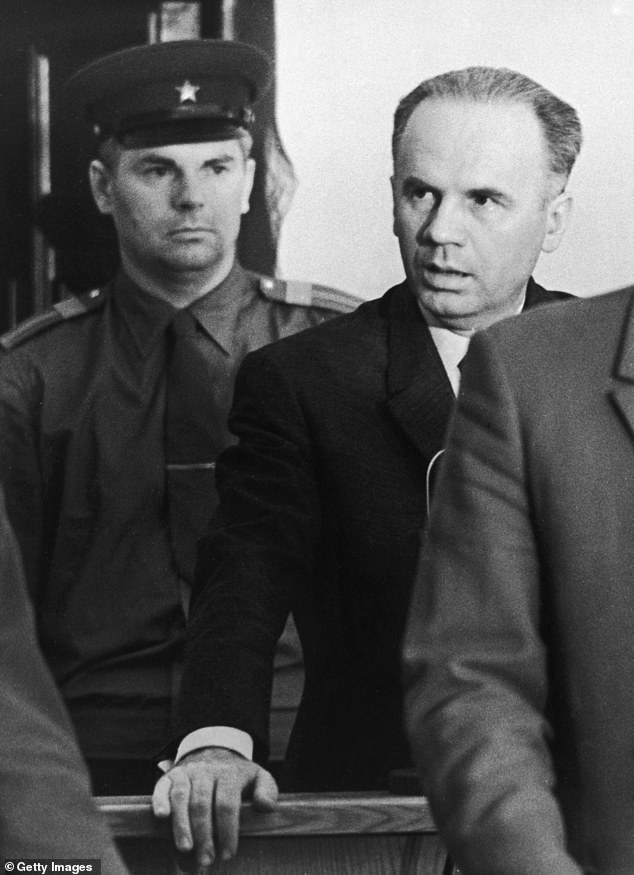 Soviet Colonel Oleg Vladimirovich Penkovsky (1919 - 1963) hears the verdict during his Moscow trial on charges of treason and espionage, May 1963. He was found guilty and executed

Those old enough can never forget a nerve-racking period of more than a week when nuclear Armageddon seemed possible every single day.

Wynne was due to take the caravan on to Moscow with his travelling trade show where he would meet Penkovsky, who was to be ‘exfiltrated’ to the West secreted inside.

However, as the last sozzled Hungarian official stumbled home, Wynne realised that the game was up and he wouldn’t be going to Moscow — at least, that is, not for a rendezvous with Penkovsky.

‘Four men had appeared as if by magic,’ Wynne recalled of the moment it dawned on him that his spy work had been rumbled. ‘They were all short and thickset and wore their trilby hats at the same angle. One of them said quietly, “Mr Veen?”, and I said, “Yes, that is my name.”’

Wynne’s interpreter was making a quick exit when the Englishman called to him for help. ‘It’s all right, they speak good English,’ he replied weakly as he continued to walk away.

The four goons seized Wynne and hurled him into a car, kicking him viciously in the kidneys and bludgeoning him on the head with ‘something metal’. He awoke to find himself in the footwell of a moving car, arms handcuffed behind him, face covered in blood.

Driven to a prison, Wynne’s jacket lapels were ripped off as they were a favourite place for agents to hide poison. After he feigned bemusement when asked, ‘Why do you spy on us?’, he was stripped naked and subjected to a full body examination.

The next morning, he was flown in a Soviet military plane to Moscow and a far worse jail — the infamous Lubyanka Prison. Here he would remain for 18 nightmarish months, after being tried and convicted along with Penkovsky who had been arrested before Wynne and had their relationship beaten out of him.

Wynne was sentenced to eight years’ imprisonment, five in a labour camp, while Penkovsky was executed by a firing squad (although a Moscow rumour said he’d been cremated alive).

Wynne’s ordeal ended only when he was swapped at a tense Berlin border checkpoint exchange for a Russian agent, Gordon Lonsdale. Quizzed by reporters back in the UK, Wynne could still manage a joke about his shaven head being the Lubyanka’s ‘interpretation of a haircut’.

However, he was a broken man who would become estranged from his family and descend into alcoholism. He died aged 71 of throat cancer in 1990. ‘How many secrets has this man taken to his grave?’ said a Labour Party spokesman.

Having twice been the focus of BBC drama series — 1985’s Wynne And Penkovsky, and Nuclear Secrets in 2007 which explored how Wynne and Penkovsky supplied the West with information on Russia’s nuclear build-up in Cuba that helped prevent a nuclear holocaust in the Cuban Missile Crisis — this remarkable episode in British espionage is to finally get the Hollywood treatment.

The Courier is a new feature film, starring Benedict Cumberbatch as Wynne.

‘He literally goes from being a rather charming businessman heading towards retirement, with a good sense of humour and a jolly manner, to being someone who is basically secreting Minox film cartridges about his case as he tos and fros to Moscow under the guise of being part of a British trade delegation,’ Cumberbatch has explained.

Referring to the atomic disaster that Wynne and Penkovsky contributed to averting, the actor added: ‘I think we forget how close we came to not existing any more.’

However, how any film tackles Wynne’s astonishing account of his life and spying must be fascinating — given that a string of historians have in recent years dismissed some of it as sheer invention.

What can be in no doubt is that Wynne, an engineer and wealthy businessman, worked for British intelligence, although when he started and how much he did for them is still hotly debated.

According to Wynne, he was first recruited — by MI5 — in 1938 when he discovered a German spy was using an illegal wireless transmitter at a Nottingham factory where they both worked. Wynne, then an engineering apprentice, recalled hearing ‘a series of staccato-like phrases in German’ coming from a cellar one night.

Sceptics, however, dismissed his Nazi agent story as most unlikely — not only because the Germans were supposedly not using secret agents at the time for fear of provoking Britain, but also because broadcasting from a cellar would have been nigh impossible. He claimed to have then become an undercover agent for MI5.

After the war, Wynne worked in the electrical goods trade, in 1950 setting up his own business as an exporter of industrial engineering products. He became a foreign negotiator for UK trade. The work involved considerable foreign travel, including — crucially — to the Soviet bloc. It was ideal cover for spying ... or approaching a recruit for MI6.

In 1955, he said he was approached by his ‘former friends in intelligence’ who encouraged him to develop his business in Eastern Europe. The same year, he said, they spotted the potential of Colonel Oleg Penkovsky, the assistant Soviet military attache in Ankara, Turkey. His real job was as a senior officer in the GRU, Soviet military intelligence.

According to Wynne, British intelligence noticed Penkovsky’s odd (for a Soviet official) behaviour — frequently slipping away alone for long strolls round the city or drinking wine at a pavement cafe where he would have a 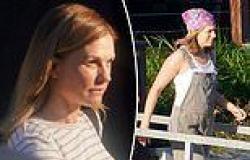 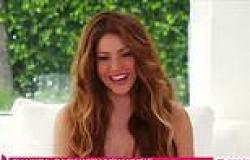 Shakira appears on Lorraine but there is NO MENTION of singer's £13million tax ...