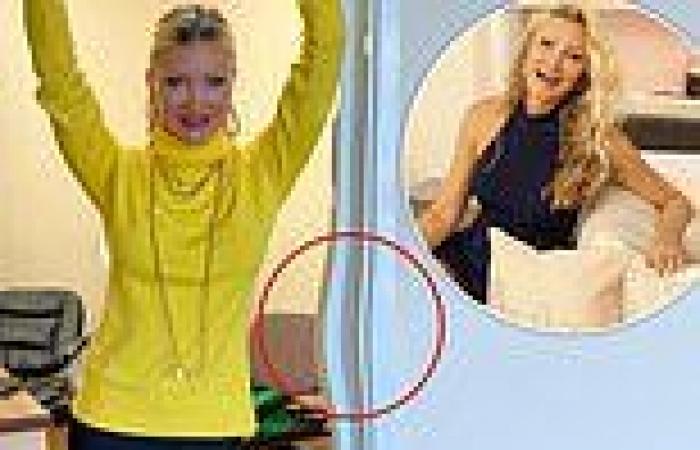 Caprice Bourret shared a slew of behind-the-scenes snaps from her day of work at Ideal TV in a Saturday Instagram post, which saw her plug her Caprice Home range.

The model, 49, looked sensational as she flashed her bronzed legs in a studded black mini skirt, which she paired with an unmissable yellow polo neck sweater.

However fans were filled with confusion as one shot, showing the blonde bombshell striking a sensational power pose outside her dressing room, featured a bizarrely distorted doorframe in line with her very svelte waist.

Suspicious: Caprice Bourret suffered an epic photoshop fail after 'slimming' her naturally-enviable waist in a Saturday Instagram post, causing a nearby doorframe to suspiciously distort

The mother-of-two appeared to have slimmed her naturally-enviable figure, which affected the background of the photo.

On the very same day, she vented her anger after the UK fuel shortage caused her to queue for fifteen minutes at a petrol station near Peterborough.

The former Dancing On Ice contestant told her fans that the ordeal nearly caused her to miss her appearance on the shopping channel. 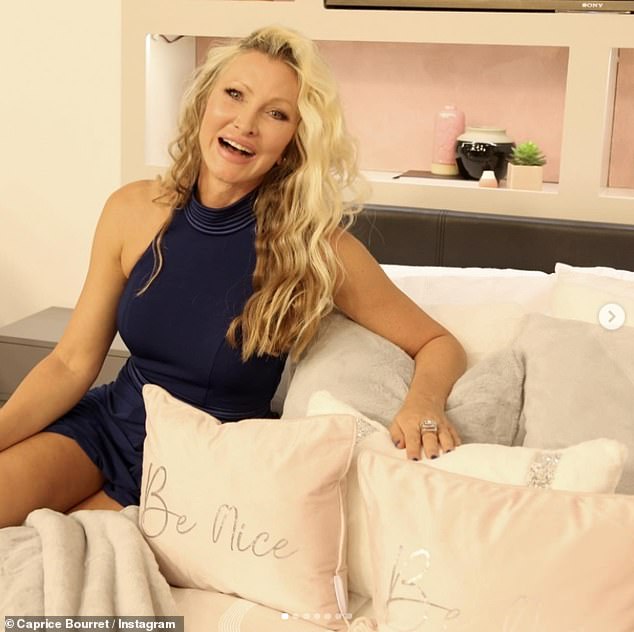 Businesswoman: She spent the day at the Ideal TV studios in order to plug her Caprice Home range

She began, through gritted teeth, 'I’ve been sitting here for fifteen minutes now waiting to get petrol. Finally I’m at the front.

'But look at this… and the queue back there. What is going on? Well, we know exactly what’s going on.

'This is crazy, I’m doing my show on Ideal with my Caprice Home, so exciting. It’s a live show, I hope I make it,' she concluded before letting out two squeals of emotion. 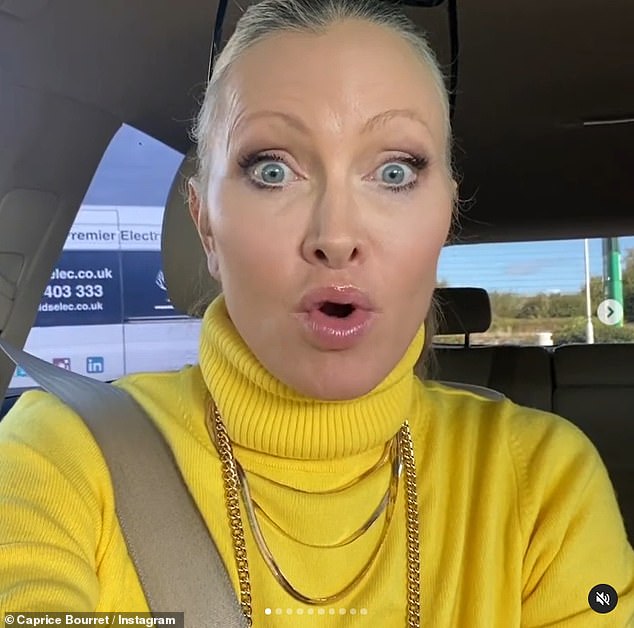 'This is crazy, what is going on?' Caprice shared an Instagram video earlier in the day to vent her anger after the UK fuel shortage caused her to queue for fifteen minutes at a petrol station near Peterborough

It seems the Vogue cover star had more to add as she went on to call out prime minister Boris Johnson and mayor of London Sadiq Khan in her caption.

'Morning gorg friends … so on my way to my show @idealworld.tv @bycapricehome.

'Btw thank u so much for everyone that tuned in sold out if some lines and went through 40% of stock in first half of show #sograteful.

'But on the way up I couldnt believe what happened … actually I do #thanksborisjohnson queuing for petrol yesterday. 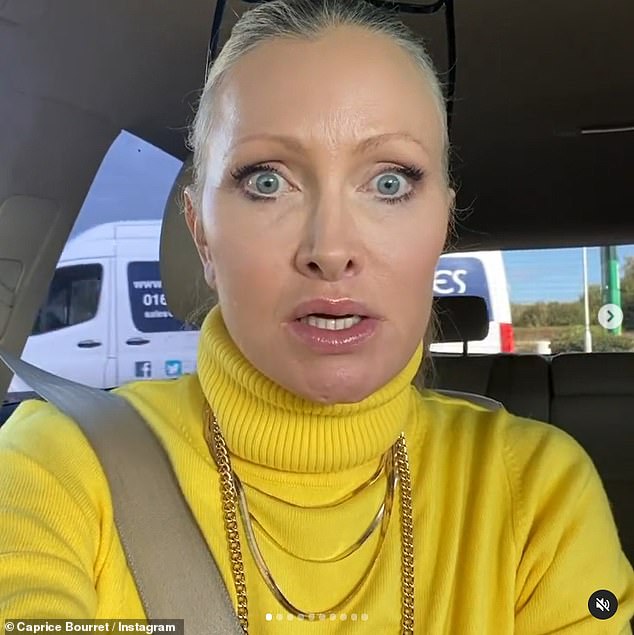 Irritated: She began, through gritted teeth, 'I’ve been sitting here for fifteen minutes now waiting to get petrol. Finally I’m at the front. 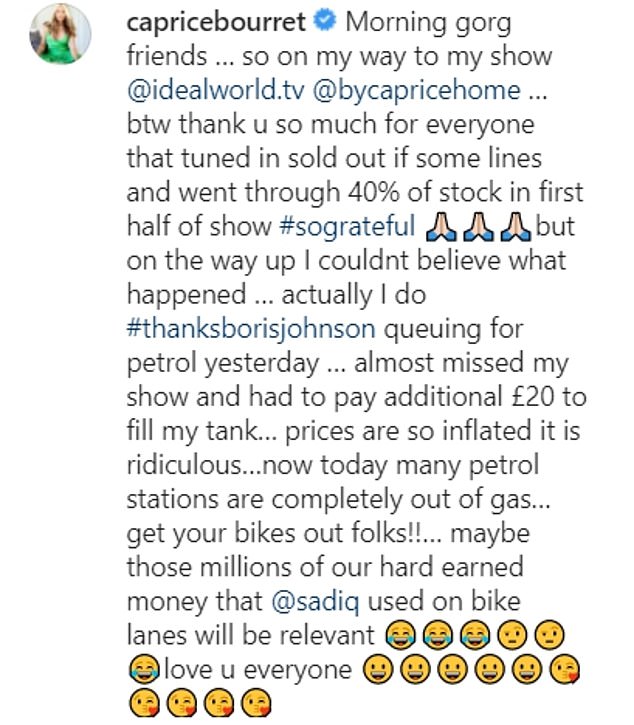 Worried: The model told her fans that the ordeal could cause her to miss her TV appearance

'Almost missed my show and had to pay additional £20 to fill my tank,' the star with a reported net worth of £24 million added.

'Prices are so inflated it is ridiculous…now today many petrol stations are completely out of gas… get your bikes out folks!!

'Maybe those millions of our hard earned money that @sadiq used on bike lanes will be relevant [laughing and raised-eye emojis] love u everyone.'

Having reached her destination on time, a beaming Caprice flashed up as she gave viewers a glimpse behind the camera.

PREV OnlyFans millionaire Jackson O'Doherty shows off his Playboy Mansion-style home ...
NEXT The Bachelor's Alex Nation reveals she once had an abortion during a Q&A with ... 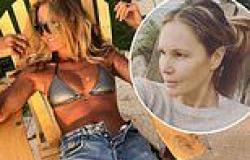 Elle Macpherson reveals the $6 beauty product she swears by 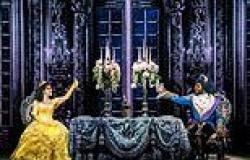 Beauty And The Beast theatre show leading man suspended over allegations of ... 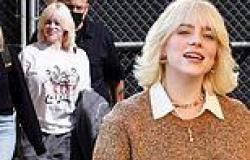 Billie Eilish goes from makeup-free beauty to full-on glamour ahead of Jimmy ... 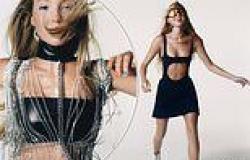 Lila Moss showcases her natural beauty and model physique as she graces the ... 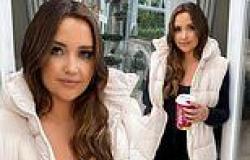 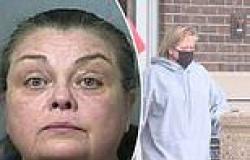