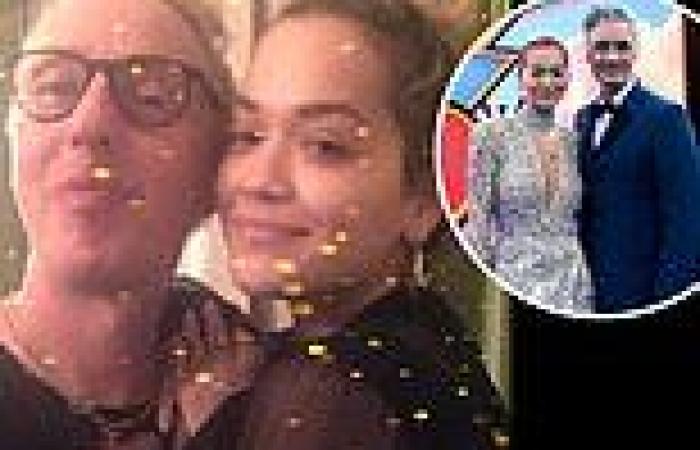 The London-based hair stylist, 53, took to his Instagram Story to share a picture with the singer, 31, where he wrote in the caption: 'Congratulations Mrs Waititi Ora'.

On Monday night it was reported that Rita married director Taika, 46, in an intimate ceremony in London and has already changed her surname. 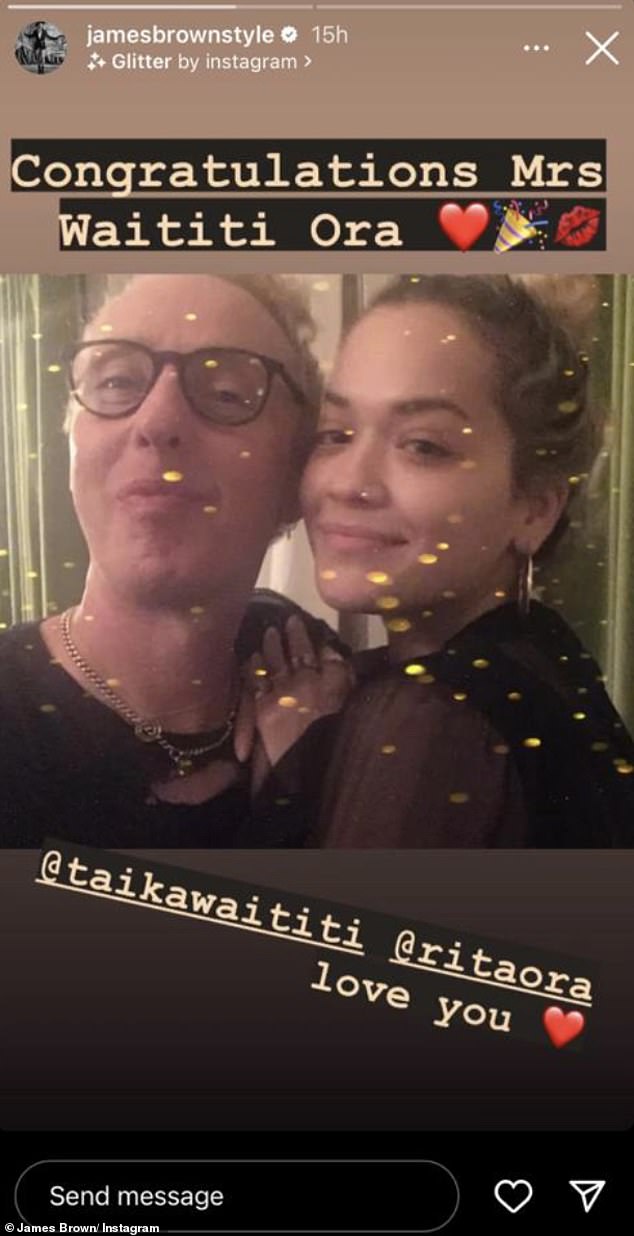 In the snap shared by James the pair both posed together for a sweet selfie as Rita put her hand on his shoulder.

She looked stylish in the snap wearing a sheer black top and gold hoop earrings while James wore an edgy ripped jumper and huge glasses.

He also tagged the two stars in his post before writing 'love you' followed by red love heart emojis underneath.

Rita married Taika in an intimate ceremony in London, according to reports on Monday. 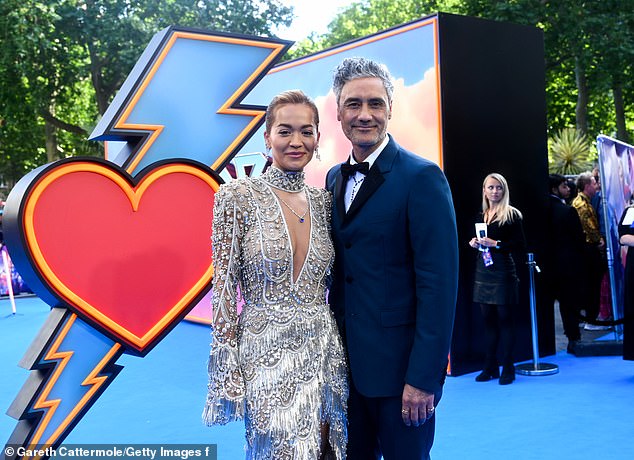 Wedding: The London-based hair stylist, 53, took to his Instagram Story to share a picture with the singer, 31, where he wrote in the caption: 'Congratulations Mrs Waititi Ora' (Rita and Taika pictured in July 2022)

The star is said to have already changed her surname and will now be known as Mrs Waititi-Ora.

The Hot Right Now hitmaker and the Thor: Love And Thunder director, 46, have both been pictured with gold bands on their ring fingers in recent days - sparking speculation they had already tied the knot.

Rita and Taika started dating in March 2021, before going public with their romance that August.

The couple got engaged two months ago, and sources now claim that they are planning a huge party to celebrate their secret wedding with friends and family.

Love: On Monday night it was reported that Rita married director Taika, 46, in an intimate ceremony in London (pictured in March 2022)

A source told The Sun: 'It was a really intimate ceremony and super special for everyone there. Their nearest and dearest can see how madly in love they are.

'Despite living in the spotlight, Rita is determined to keep the relationship as private as possible and didn't want to make a big song and dance about the wedding.

'Rita's already back in the studio working on her third album, with her latest session being with Ava Max and Noah Cyrus' writer Rollo.'

MailOnline has contacted representatives for Rita Ora and Taika Waititi for comment. 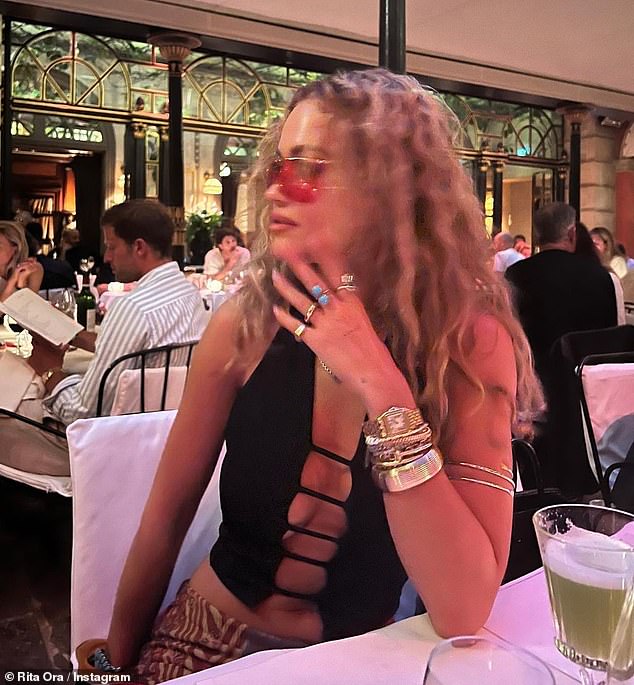 Some-ring to tell us? The singer, who sparked wedding speculation when she was seen wearing a gold band on her ring finger, has reportedly already changed her last name

In recent days Rita has done little to quash speculation that she and Taika had secretly tied the knot, after she was seen wearing a gold band on her ring finger.

She delighted fans with a photo dump on Monday as she shared sultry snaps from her recent getaway in Paris.

Rita modelled an array of dazzling outfits in the post, yet it was her jewellery that caught the eye as she was spotted wearing a gold band that matched the one Taika was also seen wearing in a previous snap.

In an Instagram snap shared by Rita's sister Elena, Taika, 46, could be seen sporting the gold jewellery on his left finger as he enjoyed a drink in the sunshine.

Rita also uploaded the same shot to her Instagram, but the singer tellingly covered Taika's hand with her caption.

MailOnline contacted representatives for Rita and Taika for comment at the time.

It was reported in June that the couple were to wed one another after almost simultaneously popping the question. 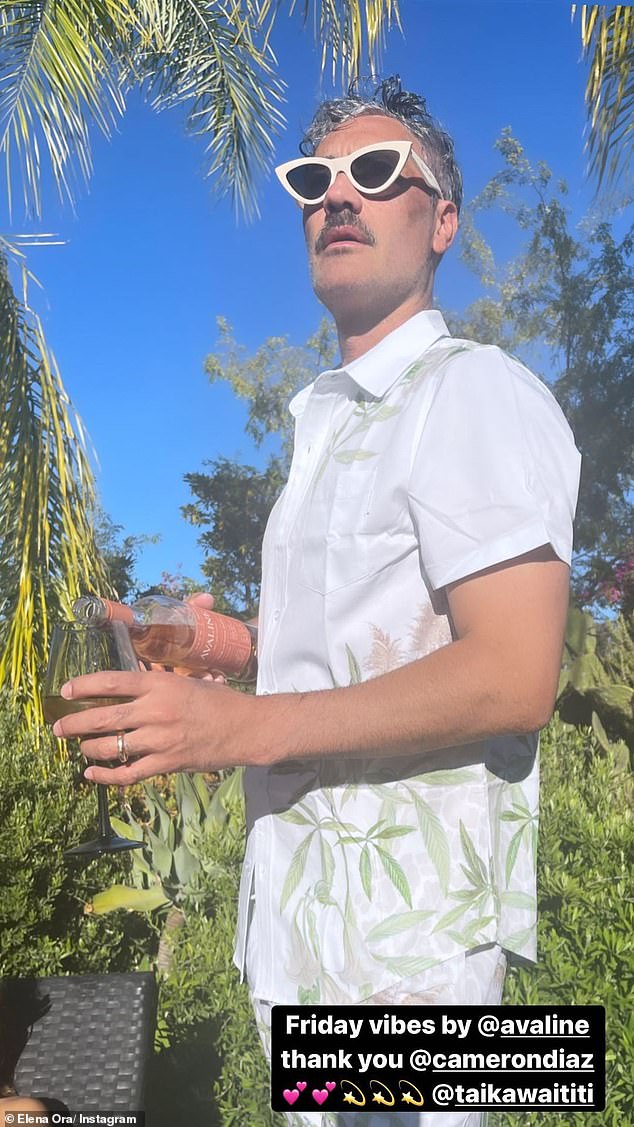 Married man? Rita and Taika fuelled speculation that they had married after the Thor director was seen sporting a wedding band on Friday

The British singer and the filmmaker were said to be planning an imminent, low-key ceremony abroad before celebrating with their fellow A-listers in a big London bash later this year.

It is understood that Rita, who is working on several films and The Voice Australia, and Taika, who is planning a string of movies, hope to tie the knot once their work commitments have wrapped up.

A friend told The Sun: 'This isn't about them doing a big showy thing and crowing about it beforehand. It's just about them being in love and deciding the time is right to formalise their relationship. They couldn't be happier. 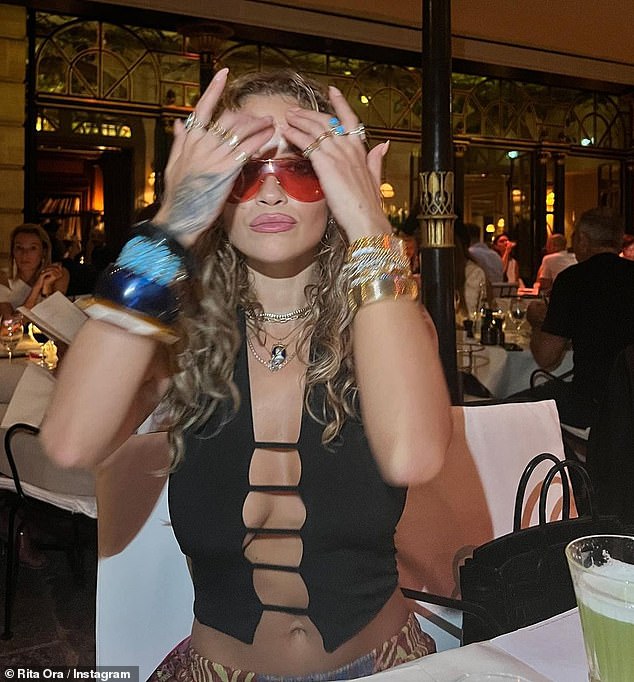 Sizzling: Rita delighted fans with a photo dump on Monday as she shared sultry snaps from her recent getaway in Paris, with a noticeable new addition on her wedding finger

'There's no ring or big build-up. They just got closer and closer and eventually said to each other almost simultaneously, 'I want to marry you.''

In August, the couple, who began dating in March 2021 after meeting in Australia, were said to be moving so fast in their relationship they started discussing marriage, a source told New Idea. 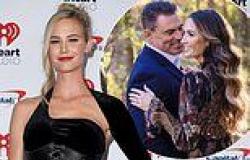 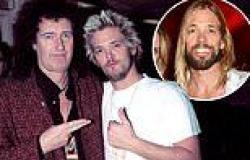 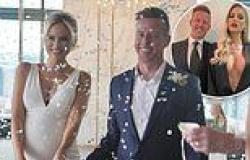 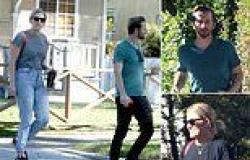 Why has my cold dragged on so long? And how do I know when it's morphed into ... 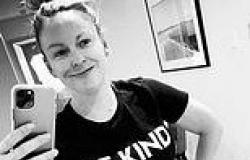