We like to think of our most advanced abilities — such as our intelligence or our creativity — as things that define us; things we personally brought into being.

Nobody says that a person ‘has’ creativity; we say that he or she ‘is’ creative. But let a tumour grow between the frontal lobes of the brain, the part essential for any creative work, and we quickly learn that those great gifts were simply on loan.

The workings of the human brain are so complex that we’re only just beginning to uncover some of their millions of secrets. But one thing we have discovered since I first became a brain surgeon 15 years ago is that the brain has a remarkable capacity to heal itself — just as your physical body does.

Your brain can make a remarkable comeback following a devastating injury or illness, as we saw in Saturday’s Daily Mail. 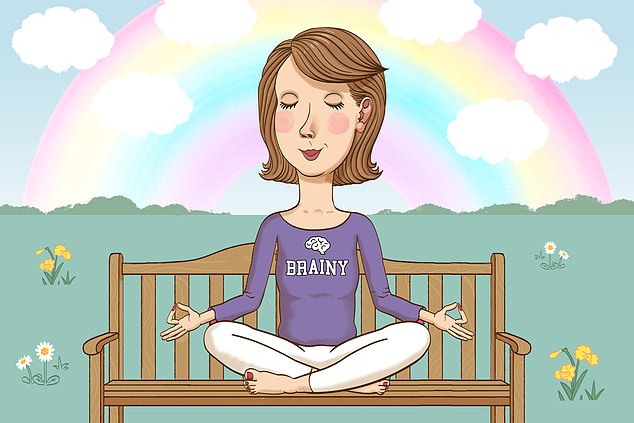 Nobody says that a person ‘has’ creativity; we say that he or she ‘is’ creative. But let a tumour grow between the frontal lobes of the brain, the part essential for any creative work, and we quickly learn that those great gifts were simply on loan

And if patients who’ve suffered brain cancer, a stroke or injuries can relearn how to walk, talk and regain their fine motor skills using techniques they practise regularly, why should anyone doubt that healthy people can’t push their brain-power into a higher gear, too?

For while most of your brain cells are formed in the womb, certain parts of your brain — particularly the area concerned with memory and learning — continue to create neurons throughout your life.

Today, in the last of our exclusive two-part series, I’ll look in more detail at how you can take control of your own brain health using simple exercises and science-based advice — starting with how you can learn to unlock your creativity. Think of it as a boot camp for your brain.

Amazingly enough, injuring one frontal lobe — the area closely associated with creativity — can leave someone functioning normally. We now know that it’s the way both frontal lobes work together that sparks arguably our highest brain function: creativity.

So where does the creative spark come from?

There’s no doubt that the frontal lobes — the part of your brain that presses up against your forehead — are vital. As the most advanced part of the brain, they work together to keep us organised and motivated in ways that non-human animals simply aren’t capable of.

But they can’t produce creative ideas and work alone.

Recent research shows it takes the whole brain, working and communicating together in harmony like a symphony orchestra or a football team, for creativity to happen.

Neuroscientists find out when different parts of the brain are communicating with each other by eavesdropping using functional MRIs. These take 3D films of the working brain, allowing us to isolate which parts are more or less active from second to second, according to how much blood is drawn to any given area.

This is because our brain cells use more blood when they’re working hard, just as your muscles do when you are running. Creativity, we now understand, requires numerous brain cells to fire up in coordination.

Many of us may assume we’re just not ‘creative types’ — but everyone has a well of creativity within ourselves, just waiting to be tapped.

How much sleep do you really need?

We call it rest — but the brain never rests. Sleep is a firestorm of activity for the brain to delete, declutter and store the day’s experiences for retrieval later.

So essential to life are the myriad activities the brain engages in while we sleep that without it, we die. While we’re asleep, the brain transforms short-term memories stacked up during the day into memories that last a lifetime.

After studying for a test, students remember more after a nap or a night’s sleep than if they had stayed awake and studied a few extra hours. Though some people insist they get along fine with as little as four hours sleep a night, research shows increased health risks associated with sleeping too little and sleeping too much.

A 2010 analysis of 16 previous studies involving 1.3 million people found those averaging less than six hours sleep a night were 12 per cent more likely to die before 65, compared to those who had six to eight hours a night. But the study also found sleeping for more than nine hours a night had a 30 per cent increased risk of early death.

So essential to life are the myriad activities the brain engages in while we sleep that without it, we die

One of the most ridiculous ideas out there about the brain’s role in creativity is that some people are logical and analytical by nature while others are creative.

It all began with an article in the New York Times magazine in 1973 about Nobel prize-winning researcher Roger W. Sperry.

‘We Are left-brained or right-brained,’ the article asserted, before explaining that the right side of the brain is the creative or artistic side and the left brain is the logical, analytical side, and each of us tends to favour one side or another.

It sounded great — and promptly became something that everyone ‘knows’. But it had one problem: it was wrong, and has since been demolished by decades of research.

This idea was definitively annihilated in 2013 by researchers from the University of Utah. They studied MRI scans of more than 1,000 people aged seven to 29 to see if they could find any support for the theory that some people use their left brain more while others use their right brain more.

They concluded there was no evidence. In other words, maths geeks and computer programmers use both sides of their brain equally, as do painters and poets.

If creativity stems from a series of ‘little fires’ burning in concert in different areas of your brain, it follows that encouraging various parts of your brain to interact and make connections is important for tapping into your inner creativity. My dual role as a brain surgeon and as a brain scientist researching treatments for brain cancer requires me to nurture creativity to make new connections in research.

ALLOW YOURSELF TO DAYDREAM

The brain is not a computer; it’s a living thing, much more like an overgrown garden than an orderly filing cabinet. Daydreaming through your own garden of thoughts, memories and feelings is a great way to discover your inner creative self. MRI scans studied by researchers at Georgia Institute of Technology have shown that daydreamers are not only more creative but can also perform better in other intellectual tests — showing there’s some substance to the popular stereotype of the brilliant but absent-minded professor.

Try this: Make a mental list of the three most important things that are occupying your mind. Now try to think about everything and anything apart from those things. This may create a mind space where daydreams can sprout.

Is the gut your second brain?

Nearly every millimetre of your body is covered in a complex system of nerves linking to your brain — and the network of nerves and neurons in the intestine has gained much attention recently, with some even hailing it as a ‘second brain’.

This network — the enteric nervous system (ENS) — explains how you feel butterflies in your stomach when your brain is nervous. It also carries signals of hunger and fullness up to your brain that, in turn, helps to regulate our appetite.

Is this network of nerves in the gut vital? Absolutely.

Has it been given more importance than it deserves? Absolutely.

And abdominal surgery provides a key to demonstrating how the role of the gut has been inaccurately overhyped recently.

For several medical conditions, (such as bowel obstructions or cancer) large lengths of bowel can be surgically removed.

And most of the intestines and colon can also be removed while letting our bodies carry on functioning with few consequences.

Yet, remarkably — despite decades of these operations around the world — there have been no reported repercussions for brain function in all these patients.

The nerve system in our