Suicides have surged by one third in the US in less than a decade, a new report from the Centers for Disease Control and Prevention (CDC) reveals.

Public health officials have been warning that the mental health of Americans is spiraling as more and more adults, teens and children report struggling with anxiety, depression and thoughts of their own lives.

The most dramatic increases in suicide deaths were among native people in the US, although the majority of people in the US who committed suicide in 2017 were white men - and the gap between male and female suicides is narrowing.

Given the recent history of suicide in the US, experts say the latest data is alarming, but hardly a surprise. 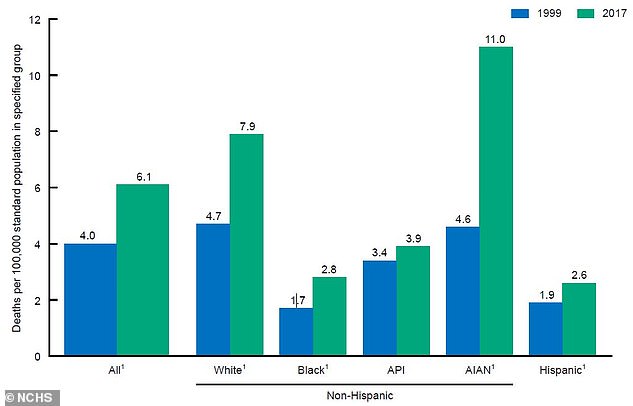 No increase in suicide deaths was so dramatic as that among American Indian and Alaska Native women (AIAN), which surged by 139% between 1999 (blue) and 2017 (green)

According to data on causes of death, despair is hanging thick over the US.

Last week, a Commonwealth Fund report revealed that these 'deaths of despair' have hit a record high in the US.

The rate of drug overdose deaths continues to climb at the heels of the opioid epidemic and alcohol related deaths are up by 37 percent, according to that report.

And suicides - which are often underestimated, in part because intentional overdoses get ruled accidental - are up by 33 percent, according to the latest numbers from the CDC's data arm, the National Center for Health Statistics.

As has historically been the case, fewer women committed suicide, but the increase over the last decade was more substantial.

'We know that females attempt suicide three- to four- times as frequently as as males, but die less often, [in part] because they use less lethal means,' explains Dr Jonathan Singer, Board President at the American Association of Suicidology.

But the recent increase 'raises the question...are more females attempting suicide and dying or the same percentage

PREV Beat type 2 diabetes in middle age - and you could fight off Alzheimer's
NEXT Putting North West under new lockdown measures was a 'rash' decision, top ...