Using tanning beds to get a bronze glow can almost double people's risk of skin cancer, warns a new study.

A study of more than 150,000 women found tanning salon customers were up to 83 percent more likely to develop the disease.

Natalie Trout, 38, was one of those customers for some 13 years, bronzing herself in the faux sunlight, without any UV protection, often multiple times a week, she told Fox.

By 2016, she had developed skin cancer on her right cheek.

Although Natalie was a long-time tanning bed user, the new study's figure was true regardless of how many years participants did it, or how old they were when they started, according to the latest findings published in JAMA Dermatology. 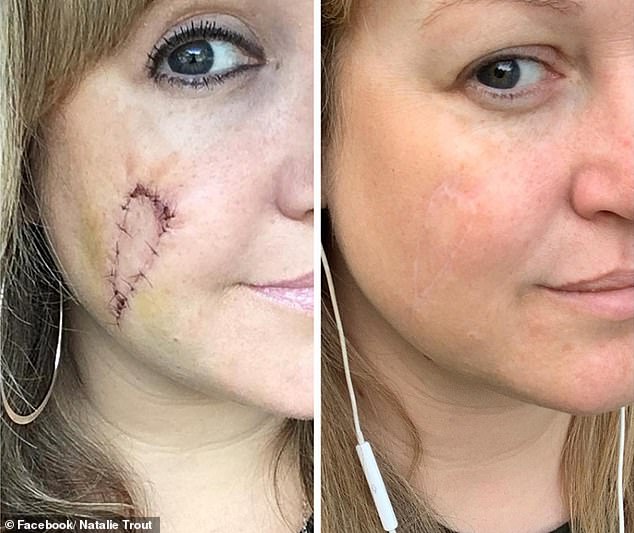 Natalie Trout developed melanoma in 2015 and had to have the cancer cut from her cheek (left). Though she's now healed (right) she says she won't forger her doctor's warning that her tanning bed use likely triggered the disease.

For most of her life, Natalie tanned both outdoors and in.

'Everyone around me was tanning, and I was insecure enough at the time to feel like I needed to use sunbeds as well,' she said.

'Usually I would burn, but that didn't matter.

'To me, it was better to be burnt than pale. Pale was almost unacceptable at the time.'

But it did very much matter to her skin cancer risks.

Five serious sunburns increases the risk that a person will develop skin cancer by as much as 80 percent, according to some studies.

And tanning beds seem to come with particularly serious risks.

Tanning beds give out ultraviolet (UV) rays - and overexposure to UV rays is the main preventable cause of skin cancer.

Statistics show cases of melanoma - a deadly type of skin cancer - has soared in the past decade, particularly in younger people.

An astounding third of Americans use tanning beds, despite widespread dermatologists' warnings against doing so.

Study corresponding author Dr Simon Lergenmuller, an epidemiologist at the University of Oslo in Norway, said: 'These results support development of policies that regulate indoor tanning.'

Sunbeds give out ultraviolet (UV) rays - and overexposure to UV rays is the main preventable cause of skin cancer.

Statistics show cases of melanoma - a deadly type of skin cancer - has soared in the past decade, particularly in younger people.

In the first study of its kind, lead study author Dr Simon Lergenmuller and his colleagues at the University of Oslo identified a 'dose-response link' with squamous cell carcinoma (SCC). 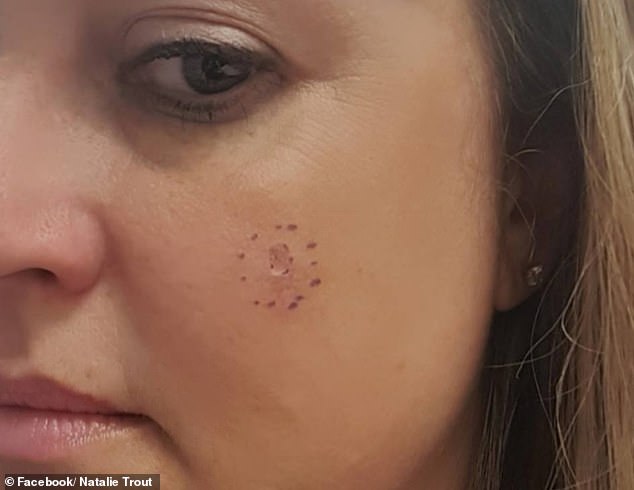 What started as rough, red patch on her cheek turned out

'Everyone is happy he's back playing': Reynolds to start in trial match mogaznewsen