As a psychiatrist I can prescribe all sorts of medication and therapies. But there is one ‘treatment’ I know of that transforms patients’ lives more than any other. Sadly, it isn’t available on the NHS.

It isn’t a magic pill or potion. It’s not a cutting edge operation. It’s a dog.

Time and again I’ve seen how canine companions can help people through the darkest and most difficult periods of their lives.

Just this week, former Blue Peter presenter Janet Ellis wrote movingly in this paper about how her dog, Angela, has helped her cope with her husband’s stage 4 cancer diagnosis.

Now a novelist, Janet says that Angela, an Italian Spinone, is a ‘source of joy’ and a distraction from the emotional trauma and practical difficulties she, her husband John and their family are facing. Their pet encourages them to live life ‘to the full’. 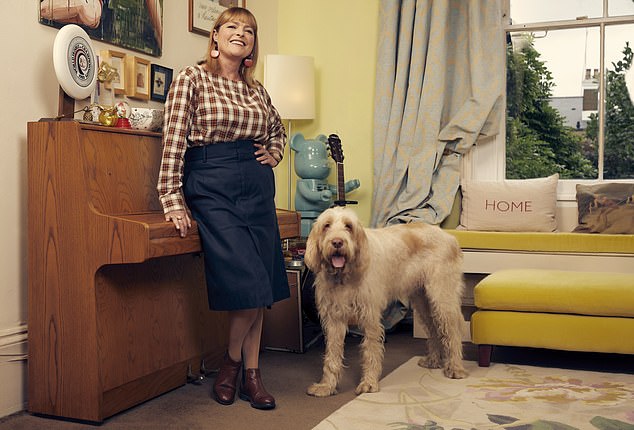 Blue Peter presenter Janet Ellis wrote movingly about how her dog, Angela, has helped her cope with her husband’s stage 4 cancer diagnosis

I understand where she’s coming from. A four-legged friend can have a truly profound impact and be a source of succour when medication and clinical staff cannot.

I remember one elderly lady — I’ll call her Mrs Leslie — who had been in hospital for four months recovering from a broken hip and chest infection.

The surgeon looking after her had noticed that she was becoming increasingly withdrawn and tearful, so I was asked to assess her mental state.

When I arrived on the ward, Mrs Leslie sighed and turned her face to the wall.

‘Do you think you are depressed?’ I ventured. She shrugged.

I sat at the bottom of her bed while she continued to stare at the wall and said nothing.

Eventually, when I had almost given up hope of any further interaction, she whispered: ‘I miss Robbie.’

‘It must be very hard for you,’ I replied as I knew from her notes that she had been widowed two years previously and had no other family. ‘How long were you and Robbie married?’

She turned to look at me, puzzled, then shook her head. ‘Robbie’s my Jack Russell. I was married to my husband for 40 years but I don’t miss him.’

‘My neighbours have been looking after Robbie,’ she continued, ‘but they’re not dog people and apparently he’s keeping them awake all night howling.

‘He never howls when he’s with me. What if I have to go into a nursing home? What will happen to him then?’

There were tears in her eyes as she added: ‘I don’t know what I would do without that dog.’

Now she had embarked on the subject of Robbie, there was no stopping Mrs Leslie. She told me that although she lived alone, she had never felt lonely because she had Robbie. He was 14 years old and blind in one eye, but he clearly gave her life meaning in a way that no antidepressant pill I could prescribe ever would.

This isn’t just conjecture. Studies repeatedly show that as well as providing companionship, pets also have a demonstrable impact on our physical health.

Older dog owners, for example, are more than twice as likely to maintain their mobility as non-dog owners because they have to regularly walk their pups. Pet owners also have lower blood pressure and cholesterol levels, and are less likely to feel lonely.

And as the Mail’s pain supplement reported this week, just stroking an animal increases your production of oxytocin, a hormone that acts as a natural painkiller.

Doctors often reach for the prescription pad when an alternative solution wears a collar and is wagging its tail.

I didn’t prescribe any drugs for Mrs Leslie. Instead, I spoke to her surgeon and the district nurse and we concluded that it was in her best interests to return home.

A week later she was discharged back to the care of a certain Jack Russell — it was just the tonic she needed and exactly what this doctor ordered.

How kindness really can kill

The number of deaths of homeless people in England and Wales rose by a record 22 per cent last year, according to the latest figures from the Office for National