A personal trainer's dizziness turned out to be a brain tumour that needed removing during a ten-hour operation that she was kept awake for.

Nichole Bates, from Minnesota, was diagnosed with an astrocytoma tumour in  the front left side of her brain in July this year.

The 29-year-old experienced dizzy spells up to three times a day which caused her to retch multiple times a day. She also suffered from fatigue.

But she never imagined it would be due to cancer because she was physically fit and training at the gym five times a week, competing in bikini competitions.

Mrs Bates had to be awake during the operation to remove 85 per cent of the tumour so that surgeons could make sure they weren't causing brain damage.

She has been having chemotherapy to kill the remaining tumour ever since, and is slowly getting back into her training regime. 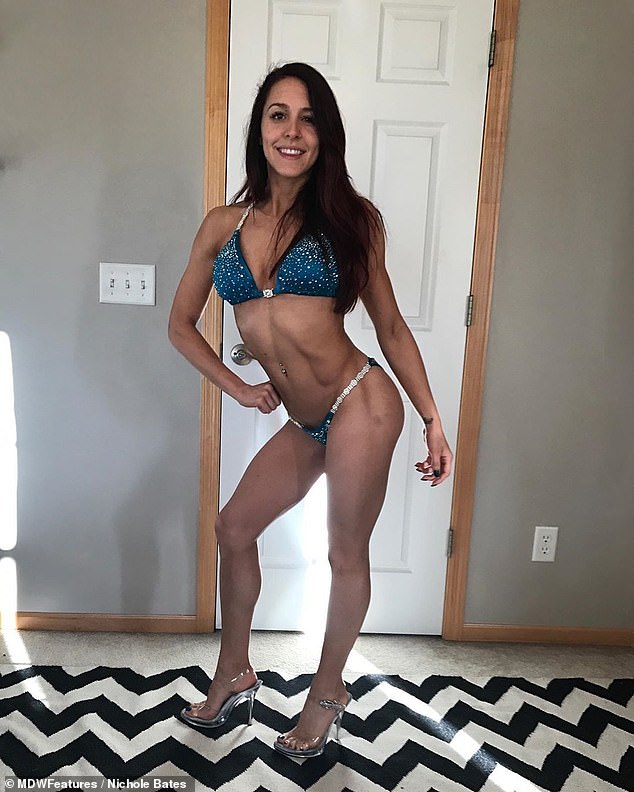 Nichole Bates, 29, from Minnesota, was diagnosed with an astrocytoma tumour at the front left side of her brain this year. She is pictured during a bikini competition in 2018 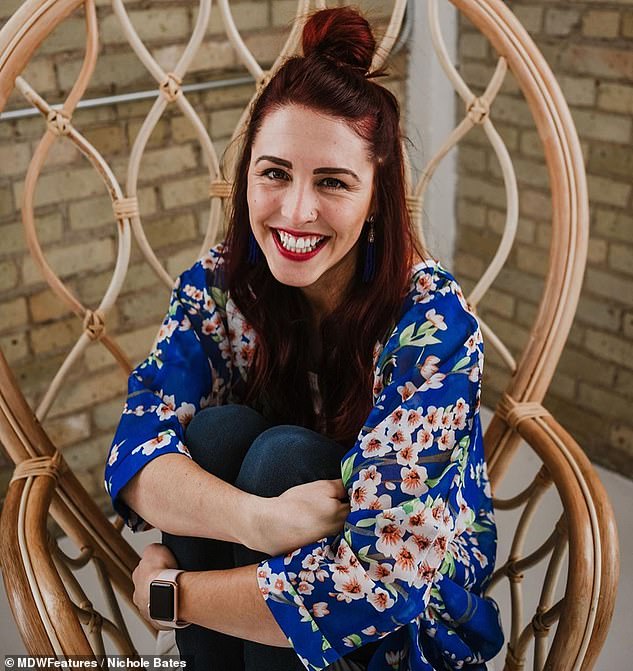 The diagnosis came as a shock to Mrs Bates, who was physically fit and in the gym constantly 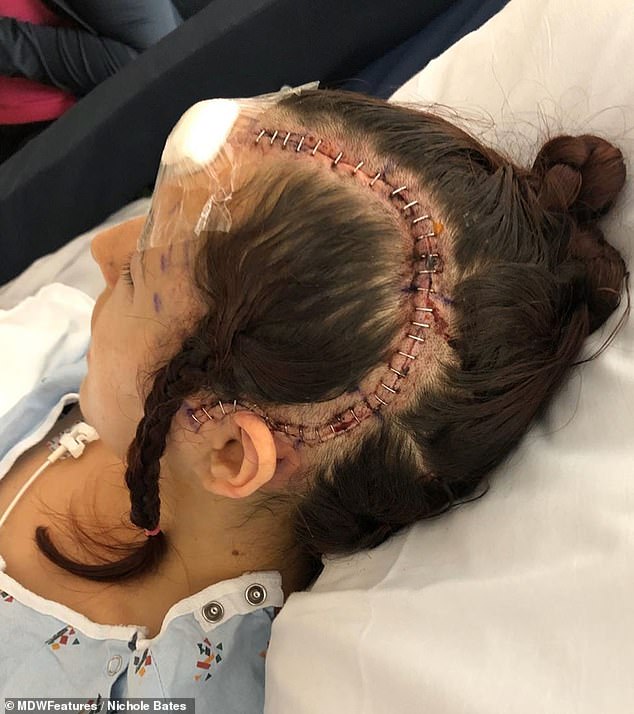 Mrs Bates' tumour was removed during a ten-hour operation. She was awake the whole time 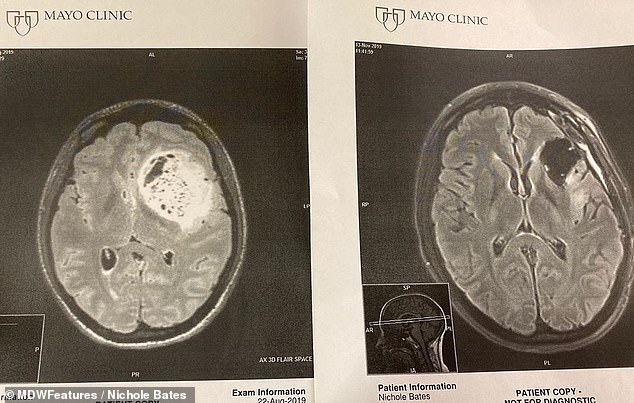 Surgeons removed 85 per cent of the tumour (pictured in scans)

Mrs Bates, who describes herself as a health and wellness coach and is a believer in God, said: 'I never expected to fight this big battle.

'I got into wellness because I wanted to help others change unhealthy habits and develop issues due to poor health choices.

'I have always taken great care of myself but after being diagnosed with cancer, it's shocking how hard workers still face things we can't control.'

Mrs Bates enjoyed working out to reach her goal of competing as an international professional bikini bodybuilder in 2018. But earlier this year she started to suffer symptoms.

She said: 'I was experiencing spit up episodes and felt very dizzy one to three times during the day at work or after work.

'I had to spit up in a cup or in the toilet and it was just saliva, there was no vomit. The more it happened the more fatigued I would get and needed to take naps to recover.'

Mrs Bates, who has been married to Davis for four years, didn't think too much of the symptoms.

But as they continued, she also found herself needing to take naps every day to fight them off and beat her fatigue.

By July 9, Mrs Bates decided she should go to hospital to get checked over. She was diagnosed with cancer the same day after tests, she claims. 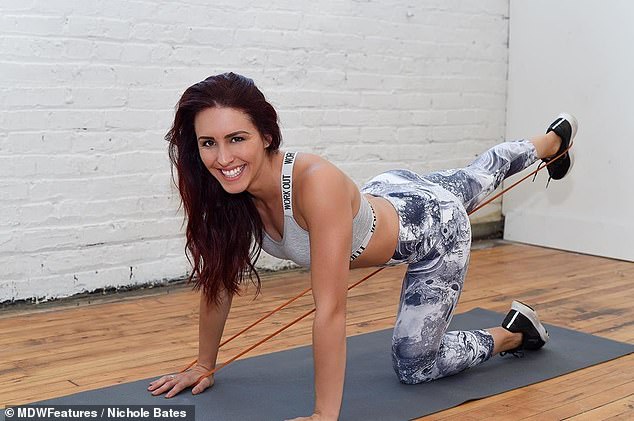 Mrs Bates, who describes herself as a health and wellness coach, said: 'I never expected to fight this big battle.' She is pictured before her diagnosis 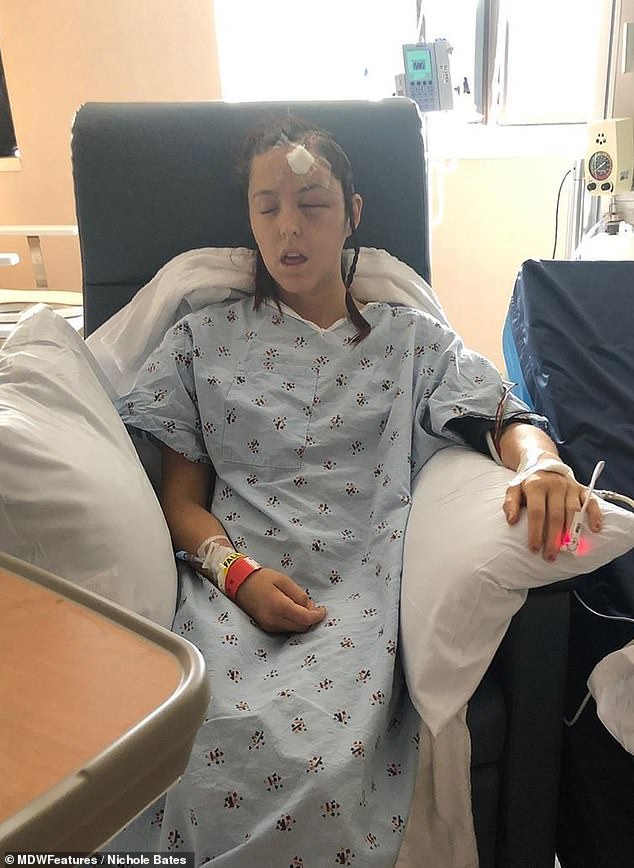 On July 9, Mrs Bates went to hospital and had an MRI and biopsy. Later that day, she was diagnosed with a brain tumour. She is pictured after surgery 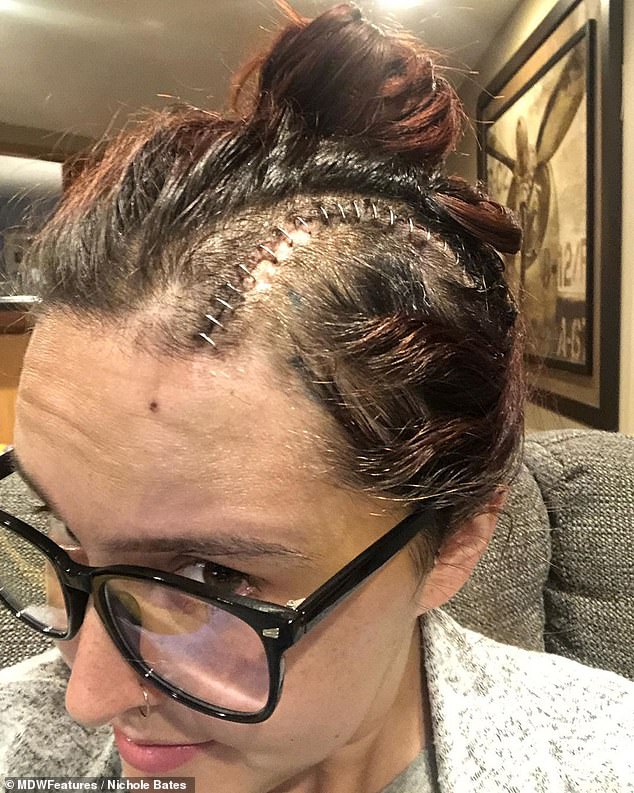 The astrocytoma was located in the front left side of Mrs Bates' head, impacting the frontal, temporal lobe, and basal ganglia part of the brain. Pictured, after surgery 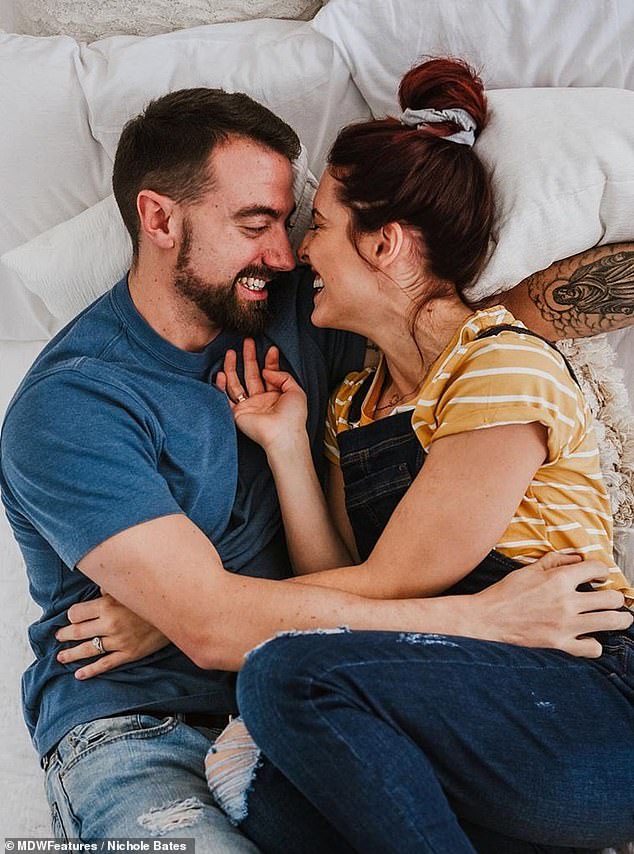 Mrs Bates, pictured with her husband of four years, Davis, said thinking about the operation at the Mayo Clinic was 'overwhelming'

She said: 'The doctor working with me had me complete an MRI right away and discovered a mass in my brain that she believed was a tumour and was most likely cancerous.

'Then she sent me to a hospital in Minneapolis to work with the oncology team to complete a biopsy and determine the astrocytoma cancer.

Astrocytomas are one of the most common forms of brain tumours, making up around a third of UK cases, according to The Brain Tumour Charity.

They grow from cells called astrocytes, which protect nerves and are vital for processing information.

There is nothing that people can do to prevent astrocytomas and their cause is unknown. Research is looking into whether it is genetic.

Astrocytomas are graded from 1-4 depending on how quickly they grow and how they respond to treatment.

Treatment depends on the grade, with 1-2 often involving surgery to remove as much of the tumour as possible.

Radio or chemotherapy may be given to kill any remaining cancerous cells.

Astrocytomas are the most common type of primary brain tumour within the group called gliomas.

The symptoms of glioma vary by tumor type as well as the tumor's size, location and rate of growth.

Difficulty with balance  Headache  Nausea or vomiting  Confusion or a decline in brain function  Memory loss  Personality changes or irritability  Urinary incontinence  Vision problems, such as blurred vision, double vision or loss of peripheral vision  Speech difficulties  Seizures, especially in someone without a history of seizures

'The astrocytoma is mutated and it responds well to treatment with radiation and chemotherapy but is constantly developing.'

An estimated 23,820 American adults will be diagnosed with primary cancerous tumours of the brain and spinal cord this year.

Brain and central nervous system cancers are the ninth most common cancer in the UK, accounting for three