Spike in post-holiday flu cases as an unusual strain sweeps the US early and kills a record 27 children in the first three months of the viral season The flu came to the US early this year, with the first deaths reported in September - before the season typically begins  Already, 27 children have died, hitting a record high for this early in the season compared to all 17 years of the CDC's tracking  An estimated 6.4 million people have fallen ill, according to the CDC's latest data Cases diagnosed the week of Christmas made up more than 20 percent of all positive tests for flu this year Flu is now widespread in 45 states in the US and the season is far from over

By Natalie Rahhal Acting Us Health Editor For Dailymail.com

Already, this flu season had doctors worried as it became widespread earlier on than the virus usually does - and now the holidays seem to have fueled a further spike in illnesses across the US.

Flu is now widespread in 45 out of the 50 US states, according to the Centers for Disease Control and Prevention's (CDC) latest data.

During the week after Christmas - ending in December 28 - more than 12,000 Americans tested positive for the flu, accounting for more than 20 percent of overall diagnoses this season.

Although the flu season is on its annual upswing this time of year any way, the travel and togetherness of the holidays may help fuel the lat December spike. 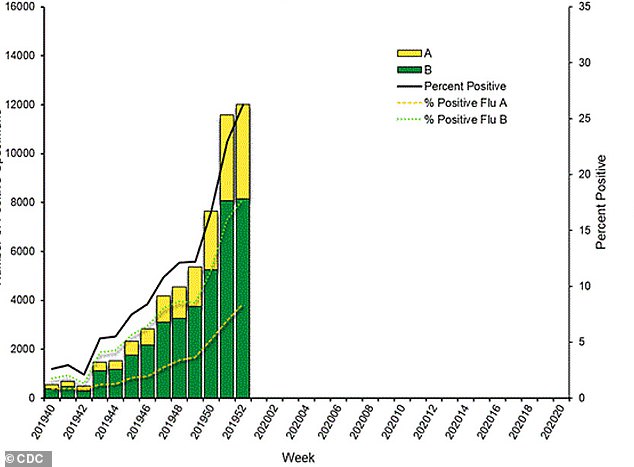 In an unusually early surge, flu cases have hit 6.4 million in the US and diagnoses confirmed the week of Christmas (far right bar) accounted for 20% of those made all season. The flu this year is driven by an unusual dominant strain: influenza B (green)

The first flu death of the 2019-2020 season was reported in California in September - an unusually early point for a fatality to occur.

At the time, experts were hesitant to cause panic, but warned that it could be a harbinger of a harsh season that would come on quickly.

They were right to be concerned.

PREV Daughter of Pat Sajak reveals terrifying moment before he underwent surgery ...
NEXT Man awakes from car crash with a traumatic brain injury - and a newfound talent ...