Over the course of the last five years, the number of Americans starting the vaccination regimen against HPV has surged by more than 80 percent, according to new Centers for Disease Control and Prevention (CDC) figures.

It's an encouraging trend - but less than a quarter of people between ages 18 and 26 get the both doses, meaning they are not fully protected against human papillomavirus.

HPV is an exceedingly common STI and it can cause cancers of the cervix, vulva, vagina, penis, anus and throat.

In an effort to stem rising rates of these cancers, the CDC now recommends that everyone start their shots at age 11 or 12, and anyone up to 26 who may not have gotten their second dose. It's approved for people up to 45 as well.

But health officials are watching vaccination rates closely, as adoption has been relatively slow. 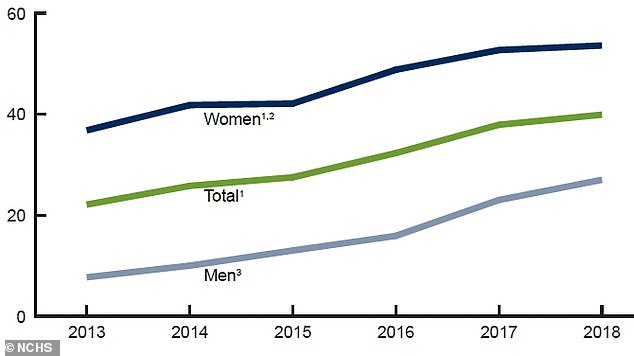 Overall, the number of Americans getting at least one dose of the HPV vaccine has increased by 80 percent since 2013, with rates tripling among men and rising to over 50% of women

Each year, 14 million Americans are infected with HPV.

About 80 percent of people who are sexually active will contract HPV at some point in their lives.

The majority (70 percent) of cervical cancers are caused by strains 16 and 18 of HPV.

And each year, some 44,000 people are diagnosed with cancers linked to these or other HPV strains.

Gardasil, the two-dose preventive shot approved in 2006, protects against both HPV 16 and 18, as well as five other strains.

Initially, the vaccine was only approved to be administered in two sequential doses