Cancer death rates in the US dropped further year over year than ever between 2016 and 2017, according to the American Cancer Society's (ACS) new report.

During a period when death rates by most other causes were remaining stable or increasing, cancer mortality was a bright spot.

Although it remains the deadliest cancer, the researchers note that falling smoking rates progress in the treatment of lung cancer played a key role in the historic drop in fatalities from the disease as a whole. 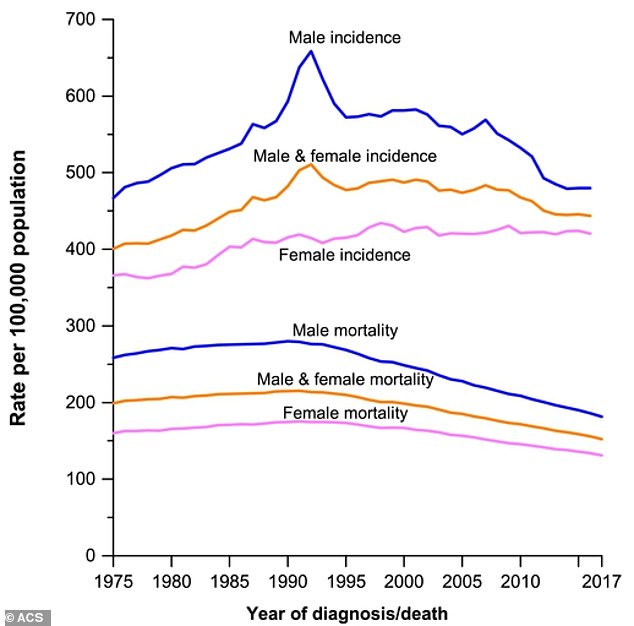 Cancer mortality rates for men (blue) and women (purple) alike (orange) began falling in the 1990s, and from 2016 to 2017, the American Cancer Society reports a record drop

Second only to heart disease, cancer is a leading cause of death in the US.

But it's no longer the certain death sentence it once was.

Drive in part by smoking and the continuing fallout of smokers from decades past, cancer rates continued to climb through 1991, then began declining.

From then through 2017, the cancer death rate fell continuously, plummeting 29 percent in 25 years.

The rate change meant a total of 2.9 million deaths have been averted since the early 1990s.

Fewer and fewer new cases of cancer have been been diagnosed each year in the US since 1999, with cases declining about 2.1 percent.

At long last, the decline in deaths has begun to catch up.

Lung, colorectal, breast and prostate cancers top the list of the types of the disease for killing the greatest number of Americans.

Over the past several decades, fatalities from these four forms of cancer have steadily fallen, driving the progress in the broader fight against cancer as a whole.

PREV Revealed, the BEST countries in the world to raise a child: Britain ranks 11th
NEXT Amazon is selling hundreds of bogus 'cancer cure' books