This is the moment a front-line nurse treating patients at a coronavirus-hit hospital is forced to give her sobbing daughter an 'air hug' from within a quarantine zone.

Liu Haiyan was called in to work in the infectious diseases unit at Fugou County People's Hospital in China's Henan province last month as the epidemic escalated.

The nurse had not seen her nine-year-old daughter Cheng Shiwen in 10 days after being drafted in along with 39 other medical workers.

They were reunited on January 31 but had to stand metres away from each other to prevent the virus spreading. 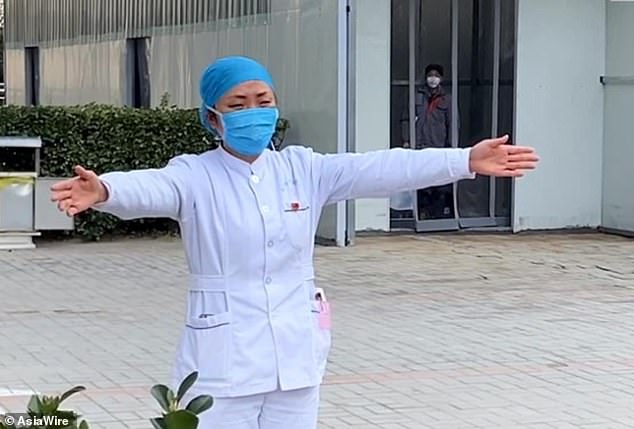 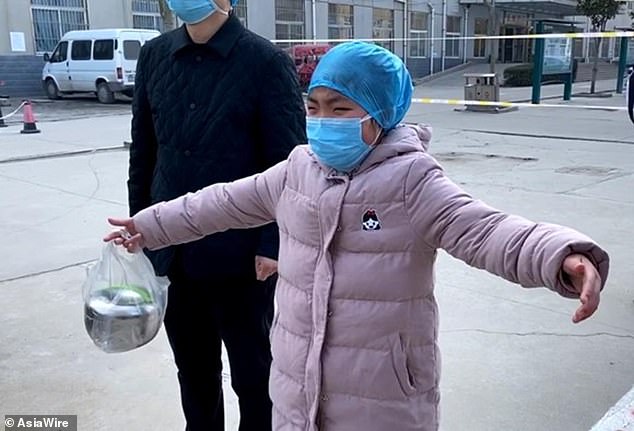 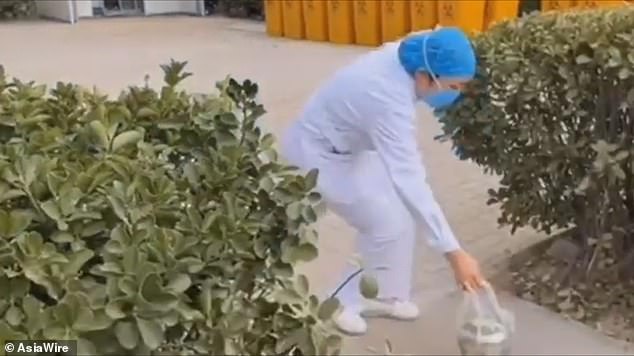 In the footage, viewed over 100million times on social media, Ms Liu is visited by Cheng Shiwen and husband Cheng Xiaoshen, who bring her a box of freshly cooked dumplings.

Ms Liu, wearing protective clothing, a facemask and  stands several metres away from her daughter as the young girl sobs and says: 'Mum, I really miss you.'

Ms Liu tell her, 'Mum misses you too, let me give you a hug' before reaching out and miming a cuddle.

When the girl asks if her mother can 'come home sooner', Ms Liu says tells her she is 'fighting a monster' and as soon as the virus is defeated 'mum will be home'.

Viewers have questioned whether the footage was staged because at one point the mother appears to say: 'Don't forget your mum is a Communist Party member. We fear nothing.'

At the end of the video Cheng Shiwen places a plastic bag with freshly cooked dumplings on the ground inside the quarantine zone for her mother to fetch when she leaves. 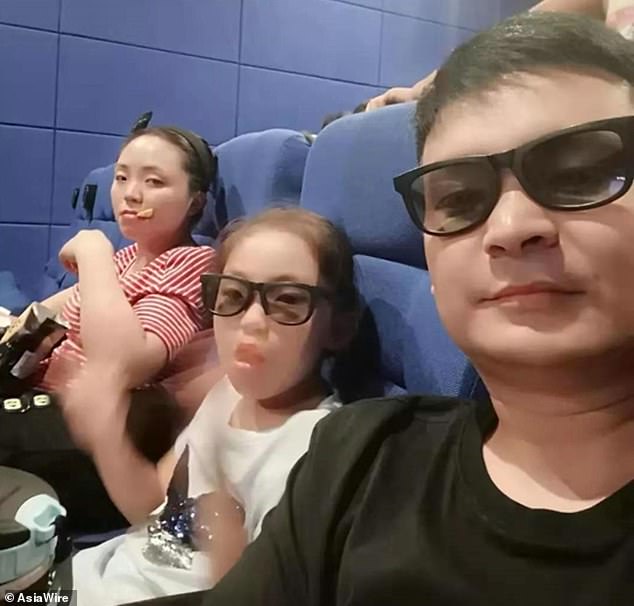 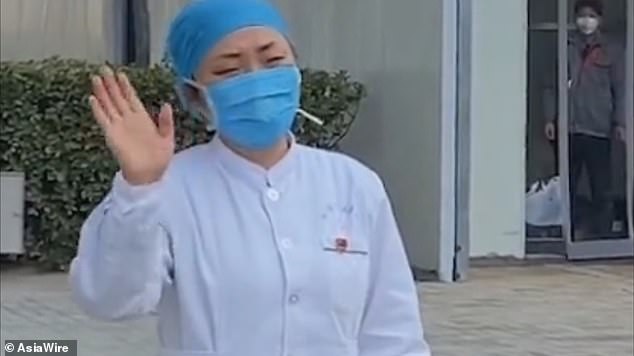 When the girl asks if her mother can 'come home sooner', Ms Liu says tells her she is 'fighting a monster' 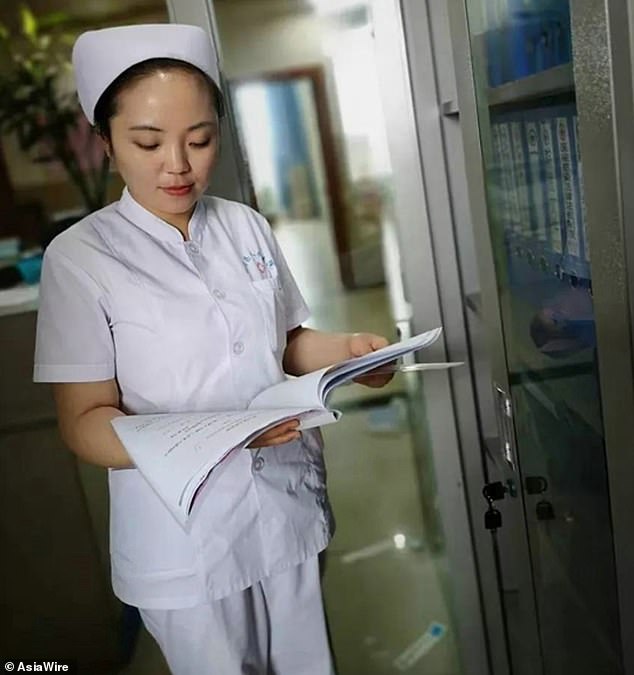 It comes as the epidemic's official death toll soared overnight by 57 to 361 cases in China, plus one in the Philippines (Ms Liu at work sometime last year before the outbreak)

WUHAN CORONAVIRUS: WHAT WE KNOW SO FAR

What is this virus?

The virus has been identified as a new type of coronavirus. Coronaviruses are a large family of pathogens, most of which cause mild lung infections such as the common cold.

But coronaviruses can also be deadly. SARS, or severe acute respiratory syndrome, is caused by a coronavirus and killed hundreds of people in China and Hong Kong in the early 2000s.

Can the Wuhan coronavirus kill?

Yes – 213 people have so far died after testing positive for the virus.

Some people who catch the Wuhan coronavirus may not have any symptoms at all, or only very mild ones like a sore throat or a headache.

Others may suffer from a fever, cough or trouble breathing.

And a small proportion of patients will go on to develop severe infection which can damage the lungs or cause pneumonia, a life-threatening condition which causes swelling and fluid build-up in the lungs.

How is it detected?

The virus's genetic sequencing was released by scientists in China and countries around the world have used this to create lab tests, which must be carried out to confirm an infection.

Delays to these tests, to test results and to people getting to hospitals in China, mean the number of confirmed cases is expected to be just a fraction of the true scale of the outbreak.

How did it start and spread?

The first cases identified were among people connected to the Huanan Seafood Wholesale Market in Wuhan.

Cases have since been identified around China and are known to have spread from person to person.

What are countries doing to prevent the spread?

Countries in Asia have stepped up airport surveillance. They include Japan, South Korea, Thailand, Hong Kong, Indonesia, Malaysia and Philippines.

Australia and the US are also screening patients for a high temperature, and the UK announced it will screen passengers returning from Wuhan.

Is it similar to anything we've ever seen before?

Experts have compared it to the 2003 outbreak of severe acute respiratory syndrome (SARS). The epidemic started in southern China and killed more than 700 people in mainland China, Hong Kong and elsewhere.

SCROLL DOWN TO SEE MAILONLINE'S FULL Q&A ON THE CORONAVIRUS

It comes as the epidemic's official death toll soared overnight by 57 to 361 cases in China, plus one in the Philippines.

As infection rates soared over the weekend, the Philippines recorded the first death from coronavirus outside of China.

The country's department of health said a 44-year-old Chinese man from Wuhan was admitted on January 25 after experiencing fever, cough, and sore throat.

He developed severe pneumonia, and in his final days, 'the patient was stable and showed signs of improvement, however, the condition of the patient deteriorated within his last 24 hours resulting in his demise.'

The man's 38-year-old female companion, also from Wuhan, first tested positive for the virus and remains in hospital isolation in Manila.

The coronavirus outbreak's epicentre, Wuhan city, has been on lockdown since mid-January, with public transport banned and flights grounded.

The severe restrictions on the city's 11 million residents, designed to prevent the spread of the disease, mean even simple grocery shopping and eating out is difficult.

Everything we know we know about the deadly coronavirus in China: But how worried should we be?

At least 170 people with the virus are now confirmed to have died and more than 8,000 have been infected in at least 18 countries and regions. But experts predict the true number of people with the disease could be 100,000, or even as high as 350,000 in Wuhan alone, as they warn it may kill as many as two in 100 cases.  Here's what we know so far:

The first human cases were publicly reported from the Chinese city of Wuhan, where approximately 11million people live, after medics first started seeing infections on December 31.

By January 8, 59 suspected cases had been reported and seven people were in critical condition. Tests were developed for the new virus and recorded cases started to surge.

The first person died that week and, by January 16, two were dead and 41 cases were confirmed. The next day, scientists predicted that 1,700 people had become infected, possibly up to 4,500.

Just a week after that,

Halsey opens up about 2015 miscarriage... but reveals she still looks forward ...