Personalised vaccines could almost halve rates of serious bacterial diseases such as pneumonia and meningitis, according to a new study.

The jabs would be based on patients' ages and where they live - as well as the strains themselves.

They offer hope of combating the threat of antibiotic resistance, which is described by the World Health Organisation as one of the greatest threats facing humanity.

Researchers said vaccines for Streptococcus pneumoniae bacteria infections are currently based on a broad approach and that making them more specific could improve them.

Different strains of the bacteria are found in different parts of the world, and people of different ages face different risks – meaning jabs could be modified to suit them.

Avoiding vaccinating people against infections they aren't likely to get would reduce the risk of antibiotic resistance developing, scientists said. 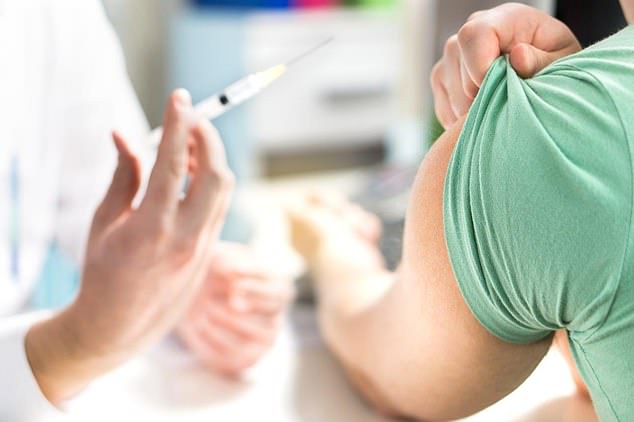 Children currently have the pneumococcal (PCV) jab on the NHS when they are babies. But scientists say it could be improved (stock image)

Professor Jukka Corander, of the University of Oslo, said: 'With the power of the latest DNA sequencing technology we are heading towards a future where large-scale genomic surveillance of major bacterial pathogens is feasible.

'The approach we describe in this study will play an important role in accelerating future vaccine discovery and design to help reduce rates of disease.'

The study published in Nature Microbiology analysed the bacterium Streptococcus pneumoniae, which claims around 30,000 lives a year.

It combined genomic data, models of bacterial evolution and predictive modelling to identify how vaccines could be optimised.

WHICH VACCINES SHOULD I HAVE HAD BY THE AGE OF 18?

Vaccinations for various unpleasant and deadly diseases are given free on the NHS to children and teenagers.

Here is a list of all the jabs someone should have by the age of 18 to make sure they and others across the country are protected:

Second doses of 6-in-1 and Rotavirus

Third dose of 6-in-1 Second doses of PCV and men. B

HPV (two doses within a year)