Scans published by scientists have shown the lung damage caused by vaping in teenagers as young as 13.

Fourteen teenagers who were hospitalised with shortness of breath, coughing and chest pains were assessed by researchers.

They found fluid or debris filled sacs in the lungs, thickening and inflammation of tissue and pressure on the chest wall.

Doctors said the findings could help lead to early diagnoses of EVALI, which stands for e-cigarette or vaping product use-associated lung injury.

An outbreak of the recently discovered illness has so far caused 68 deaths among 2,807 cases in the US. Under 18s make up 15 per cent of patients.

Not much is known about the potentially deadly condition which emerged alongside the use of e-cigarettes. The oils and juices inside vapes are thought to stick inside the lungs, causing a build-up of material that is visible in chest scans. 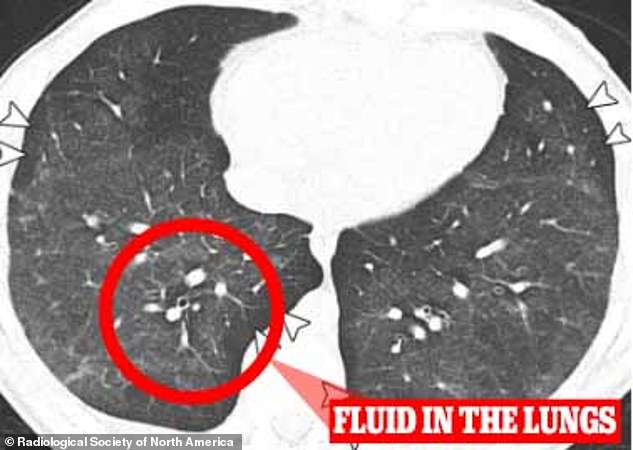 Scientists have published scans showing the lung damage caused by vaping in teenagers who became ill with EVALI. Pictured, a scan from a 16-year-old boy with a two-year history of vaping shows air spaces in the lungs filled with a substance, usually pus, blood, or water 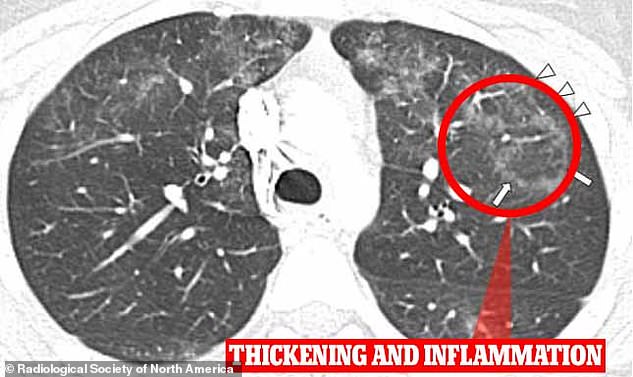 Pictured, the scan of a 16-year-old girl who had been vaping for one year. She had air spaces in the lungs filled with a substance, surrounded by thickened and inflamed soft tissue, known as a 'reversed halo'. Some 36 per cent of the patients had this

First introduced in the US around 2007, e-cigarettes are now the most used tobacco product among youth in the US, often marketed as a safer alternative to regular cigarettes.

More than 3.6million middle and high school students were using e-cigarettes in 2018, according to the National Youth Tobacco Survey.

Researchers from UT Southwestern Medical Centre in Dallas used both chest X-ray and CT imaging to examine the effects of vaping in seven boys and seven girls, ranging in age from 13 to 18-years-old.

EVALI is the name given by the Centers for Disease Control and Prevention (CDC) to the dangerous, newly identified lung disease linked to vaping.

The illness was first recognised by the CDC in August 2019 after health department officials across the US began to work together to study cases of severe, sometimes fatal, lung infections that arose suddenly in otherwise healthy individuals.

The number of people who needed to be hospitalized after experiencing symptoms ranging from shortness of breath to fever quickly rose in many states around the US.

As more details emerged, doctors and researchers discovered that patients shared at least one common risk: all reported they had recently used e-cigarette or vaping products.

Even though the agency announced that vitamin E acetate appears associated with this vaping-related illness, federal investigators have not yet identified a single ingredient (though there could be several) that causes EVALI.

It's therefore unclear how the condition develops or why, in the most severe and life-threatening cases, it causes the lungs to stop functioning altogether.

'This population is particularly vulnerable to e-cigarette use and its potentially life-threatening consequences,' said the study's lead author, Dr Maddy Artunduaga, an assistant professor of paediatric radiology at UT Southwestern Medical Center.

All patients had respiratory symptoms, such as chest pain and shortness of breath.

The youngsters all used an e-cigarette or engaged in dabbing - the practice of inhaling small quantities of a concentrated and vaporised drug, such as cannabis oil - in the 90 days before they started showing EVALI symptoms.