Europe has seen an East-West divide in the coronavirus crisis with eastern countries suffering far less after shutting their borders earlier in the outbreak.

Political scientists in Poland and Greece say the vulnerability of health systems in Eastern Europe spurred leaders into decisive action, while governments in the west felt a 'greater sense of complacency'.

The Czech Republic closed its borders when it had only 120 cases and Poland took the same step after 68 infections, while Britain has still not done so.

Data shows that countries which closed their borders have often seen fewer deaths, and the UK's chief scientific adviser Patrick Vallance admitted yesterday that 'the high level of travel into the UK' brought a wave of virus cases to Britain.

Measured by cases per million, the 20 worst-affected countries in Europe are all in the western half of the continent, including Spain, Italy and the UK.

Even relatively successful western countries such as Germany and Austria are in the top half of the list, ahead of small economies such as Albania and Montenegro. This map shows Europe's East-West divide on coronavirus, with countries in Western Europe suffering far more cases per million people than those in the east which generally closed their borders at a much earlier stage of the outbreak

Latvia, Lithuania and Estonia will open their borders to each others' citizens from May 15, creating a Baltic 'travel bubble' within the EU, their prime ministers said on Wednesday.

The Baltic travel area would be first of its kind in the bloc, where most countries restricted entry to non-nationals and imposed quarantine on incoming travellers as the novel coronavirus spread across the continent.

'We have agreed that all three Baltic states have properly contained the spread of the coronavirus, and we trust each others' health systems,' Lithuania's Prime Minister Saulius Skvernlis wrote on Facebook.

'So, starting from May 15, we are removing all restrictions for citizens of Lithuania, Latvia and Estonia traveling between the Baltic states.'

People entering the region from other countries will need to self-isolate for 14 days, he added.

The European Commission has recommended that internal border controls between all member states should be lifted in a coordinated manner, once their virus situation converges sufficiently, the commission's office in Lithuania said.

When the epidemic started to reach Europe in January and February, western countries were generally affected earlier, meaning the crisis was already spiralling out of control when lockdowns began in mid-March.

Britain, Germany, France, Italy and Spain had all confirmed their first cases by the end of January, and France said this week it had discovered one from December.

The pandemic reached Russia on January 31, but was not detected in Greece or Romania until late February or in Poland, Ukraine or the Czech Republic until March.

Although Western Europe had an earlier outbreak, it continued to hold sporting events and go on ski holidays throughout February as the virus spread rapidly around Europe.

Italy became the first European country to go into lockdown on March 10, by which time it already had 9,172 cases and 463 deaths.

Similarly, the UK waited until it had 6,650 infections and 359 deaths before Boris Johnson announced a full-scale lockdown on March 23.

Britain has never closed its borders, and Heathrow Airport is not carrying out temperature checks on the few people still arriving in Britain.

The UK's security minister James Brokenshire yesterday defended Number 10's decision not to close the borders in a bid to stop the virus spreading.

Mr Brokenshire insisted the scientific advice was 'very clear' and that banning travellers would 'not have had any significant impact'.

Sir Patrick Vallance told MPs that the SAGE advisory group had advised ministers that they would have to be 'extremely draconian' in blocking travel from whole countries otherwise 'it really was not worth trying to do it'.

By contrast, the Czech Republic had already announced a ban on foreign visitors as early as March 13 when it had only 120 cases and no deaths. It now has only 7,899 cases and 295 deaths.

Poland announced a similar measure the same day, with only 68 cases and one death confirmed up to that point, while Lithuania closed its borders on March 14.

Croatia only confirmed its first case on February 25, but had shut its borders and closed schools by mid-March.

Spain and France closed their borders around the same time, but they had already piled up far more cases by then, leading to more deaths.

The Czech government was also a pioneer in ordering the use of masks, which became compulsory outside the home on March 18.

Western countries have been slower to adopt masks, although many nations are now demanding them on public transport as lockdowns are gradually eased. 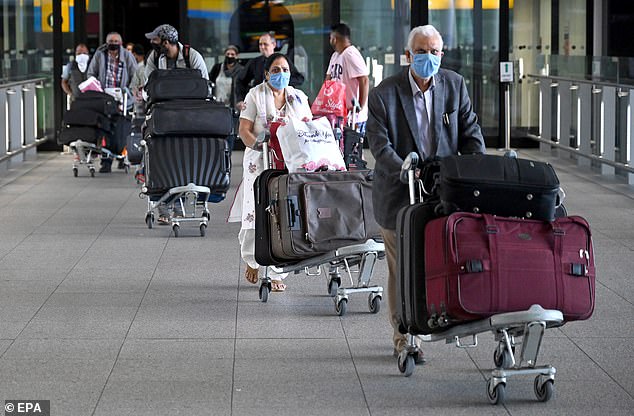 Passengers arrive at London Heathrow Airport at the weekend, where airport staff are not taking temperature checks and there are no special restrictions on entering the UK

Speaking to the Guardian, political economist George Pagoulatos suggested western countries had been complacent about the strength of their health systems.

He contrasted that attitude with Greece, which shut down schools and universities as early as March 10 when it had only 89 cases and no fatalities.

'Like countries in central and eastern Europe, Greece had a very real sense of the fragility of its health system,' he said.

DEATHS IN THE UK COMPARED TO COUNTRIES WHICH IMPOSED TRAVEL BANS

'That incited the government to take urgent measures earlier than other west European governments which felt a greater sense of complacency about their systems' ability to handle the crisis.'

Warsaw-based political scientist Ben Stanley said Sweden and the UK had not feared an 'absolute meltdown' of the health system in the same way as Eastern Europe.

As a result, governments in those countries spent time weighing up their options 'rather than being bounced' into early action, he suggested.

Britain's death toll (29,427) yesterday surpassed Italy's (29,315), making the UK the worst-hit nation in Europe. Only the US has recorded more Covid-19 fatalities.

Separate figures revealed that the UK quarantined just 273 out of 18.1million people who arrived in the

PREV health care Merck CEO issues warning on coronavirus: 'Until all of us are safe, none of us ...
NEXT health care Coronavirus live updates: WHO calls for research into Wuhan market, Indonesia ...