Today, and every day, roughly 190 Britons will die from dementia – about 1,350 every week – and numbers are steadily and ominously rising.

It is by far our biggest killer, having overtaken heart disease five years ago as fatalities from heart attacks and strokes continue to decline. Within the next few years, more than one million Britons will be living with the degenerative brain condition.

It’s a statistic made all the more shocking when you consider that the dementia death toll is almost four times the number claimed each week at the moment by the Covid-19 pandemic in the UK.

But despite these grim figures there is hope, as the latest medical evidence suggests that whether you develop dementia is not simply down to fate. 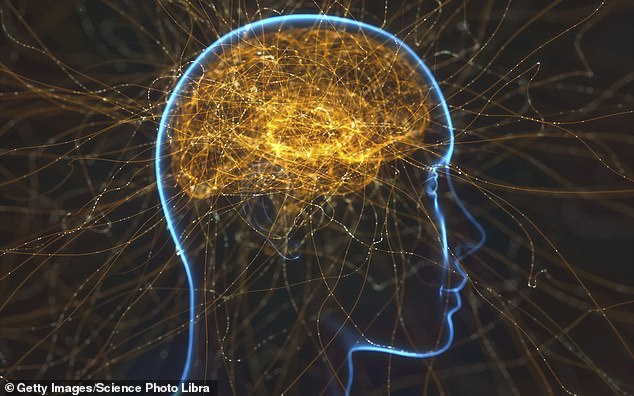 Dementia, a degenerative brain condition, is by far our biggest killer, having overtaken heart disease five years ago as fatalities from heart attacks and strokes continue to decline

Although incurable, a staggering 40 per cent of cases could be prevented in the first place, according to a global report revealed at the Alzheimer’s Association International Congress last week.

Lifestyle factors, such as diet, lack of exercise – and even hearing loss – are responsible for a whopping 340,000 of Britain’s 850,000 dementia cases, says the report. The leading scientists behind the new study identified 12 risk factors that make us more likely to develop the disease. Crucially, it’s within our power to address each one of them if we want to stay healthy into old age.

The risks begin to mount in childhood, the report said, but even making small lifestyle changes into your 70s could have a significant impact.

The report represents a huge leap forward in the understanding of the disease. Three years ago, the same research group became the first to prove how much of dementia is preventable, revealing the role of obesity, smoking, type 2 diabetes and high blood pressure. Hearing loss, if untreated, depression and too little exercise also contribute to an individual’s risk, while lack of education and social isolation were also factors flagged by the experts.

The authors, from The Lancet’s Commission on Dementia, a group of international experts, say the findings should be a wake-up call for us all, and urged everyone to take responsibility for their own health. They said: ‘Around 40 per cent of dementia cases could be prevented or delayed by eliminating these risk factors.’ So what can we do? Well, making changes to diet and lifestyle has a significant effect, not just on reducing the chances of developing dementia but also keeping the mind sharper and younger. 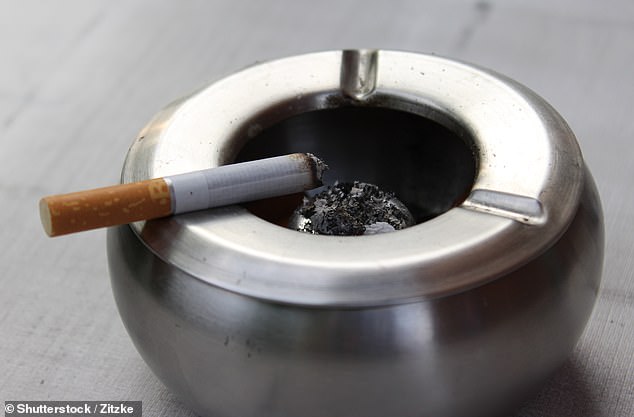 Around 40 per cent of dementia cases could be prevented or delayed by 'eliminating risk factors', such as giving up smoking, said experts (file photo)

A recent Swedish study found that being a healthy weight, keeping blood pressure in check and staying fit and active were three key factors found to significantly improve mental performance. More than 500 participants, aged 60 to 77, were advised to eat lots of fruit and vegetables, whole grains, fish and low-fat dairy, while exercise plans involved strength training at a gym plus group exercises to improve aerobic fitness, such as jogging and aerobics.

The researchers followed them for two years and found they performed better in mental tests by the end, having boosted their overall health. Similar lifestyle changes were linked to a 37 per cent reduced dementia risk in another trial involving 3,000 volunteers. Indeed, just making a change to one area, such as giving up smoking, was found to have a big knock-on effect.

It’s something I take seriously, because I’ve seen first-hand how devastating dementia can be. I was 17 when my much-loved granny, Olive, died of the disease, aged 74, having spent two years being cared for by my mum, her only child, in our family home.

Olive suffered from Lewy body dementia, the second most common type after Alzheimer’s, accounting for ten to 15 per cent of cases. Looking back now, the risk factors described by The Lancet’s Commission were all there. My grandfather Jimmy, married to Olive for 40 years, collapsed and died from an aortic aneurism aged 65, just two weeks after retiring from his job as a draughtsman at the Rolls-Royce plant in East Kilbride, south of Glasgow. Her world fell apart. In time, neighbours moved on. Friends passed away. 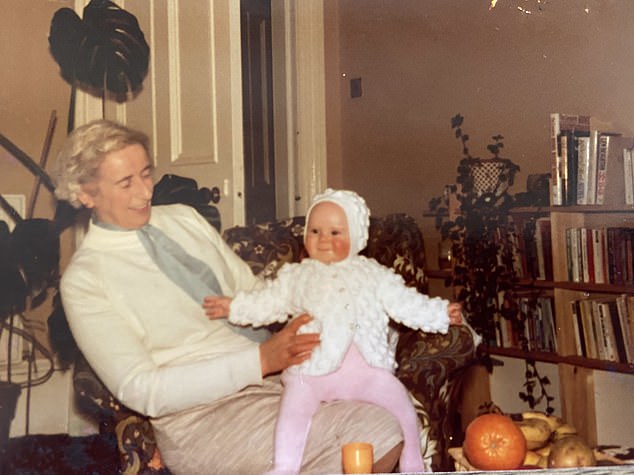 Adored: Jo Macfarlane as a baby, sitting on granny Olive’s knee before her dementia set in. Olive suffered from Lewy body dementia, the second most common type after Alzheimer’s

A fall meant she feared going out and she spent a lot of time alone in her empty house, staring out of the window. She began to forget to eat.

When she came to live with us in Fife, 80 miles away on the opposite coast of Scotland, the warm, adoring woman who’d doted on my two younger sisters and me was vanishing, bit by bit.

Every morning the house was woken by her fearful wails ‘Help me! Help’, as she opened her eyes and, again, had no idea where she was.

Most painfully, she forgot she had a daughter or grandchildren. When it was explained to her gently one day, she sobbed bitterly: ‘No one ever told me I had a daughter.’

It’s a story that will no doubt resonate with thousands of British families, on whom the burden of care so often falls.

The cost of treating and supporting the dementia population in the UK is £34.7 billion a year, and it’s set to nearly treble by 2040. Unpaid carers, like my mum, save the economy a further £13.9 billion a year.

Imagine if the emotional – and economic – burden could be lifted significantly. A one per cent reduction in dementia cases would mean 8,500 fewer people living with the disease.

In this special Mail on Sunday Health section, we’ll explain how to reduce your risk – from looking at ways to combat heart disease and diabetes, to highlighting surprising methods of prevention, such as improving your hearing.

There is still much about dementia risk that science can’t explain, but there is cause for optimism. Armed with new knowledge, it’s never been more possible to alter the course of our later lives for the better. 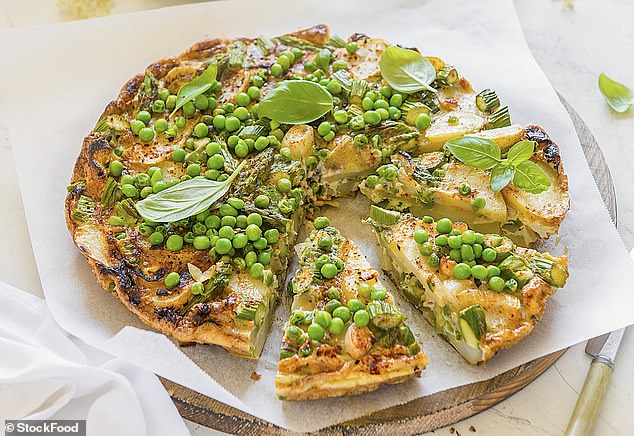 Bake for 30–35mins, or until just set and golden. Serve warm or cold (267 calories per serving)

Preheat the oven to 180C/Fan 160C/GM 4. Fry the onion over a medium heat for 5-10mins, or until softened. Whisk the eggs in a bowl and stir in half the cheese, half the onions and season well.

Pour the egg mixture into a non-stick dish and scatter over the remaining onion as well as the peas, spinach and remaining cheese. Bake for 30–35mins, or until just set and golden. 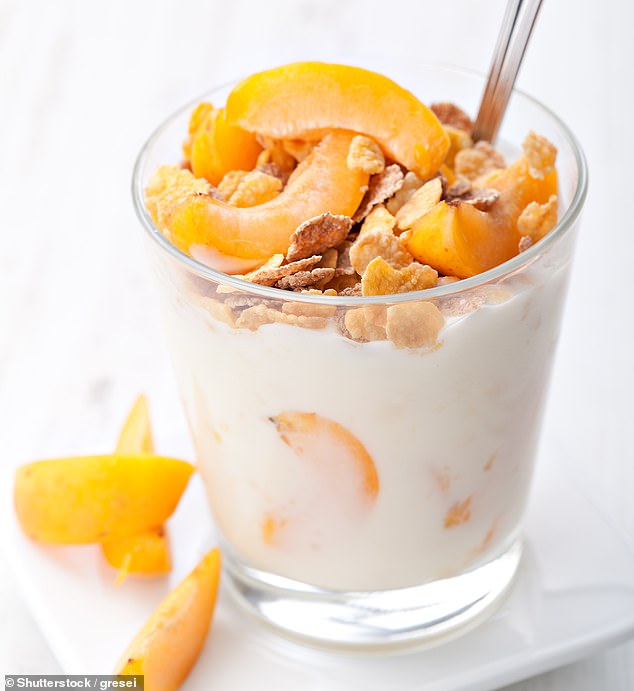 In 2 small glasses, layer the apricots and peaches, followed by yoghurt (305cal per serving)

Toast the oats lightly in a pan on a low heat, stirring frequently, until they reach a golden colour (roughly 5mins).

In 2 small glasses, layer the apricots and peaches, followed by a layer of yogurt, followed by another layer of fruit, until you reach the top of the glass.

Top with a sprinkle of the toasted oats and nuts. 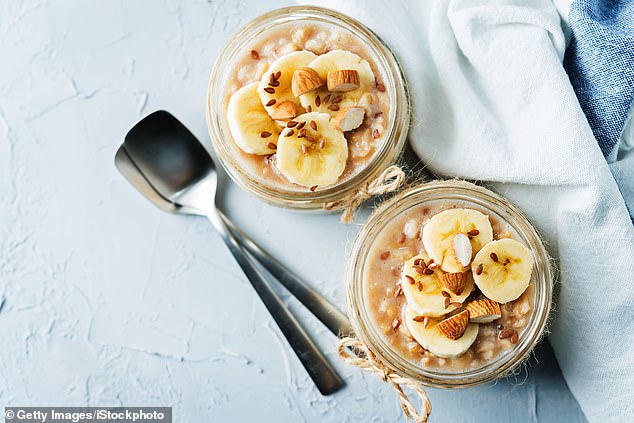 In the morning, loosen with a little water or milk if needed (380 calories per serving)

The night before, stir the skimmed milk and the cinnamon into your oats.

In the morning, loosen with a little water or milk if needed. Top with chopped banana, yogurt and a drizzle of peanut butter. 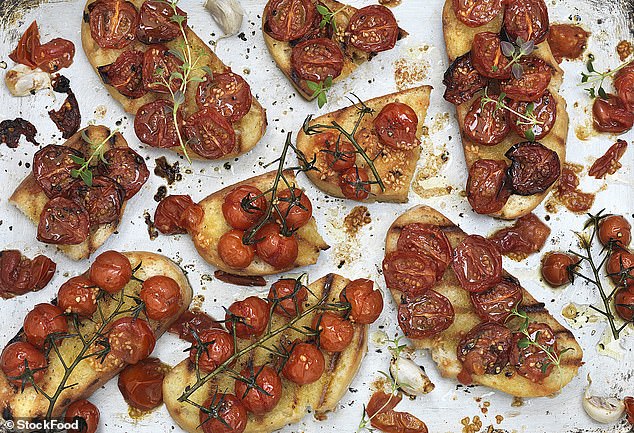 Gently fry the garlic in 1 tsp of oil for 1min, then add the cherry tomatoes and mixed herbs. Turn up the heat and allow the tomatoes to sizzle until the skins start to blister.

Toast the bread and drizzle the remaining tsp of oil on the bread.

Place the tomatoes on top and season with salt and pepper.

Baked eggs with greens and yoghurt 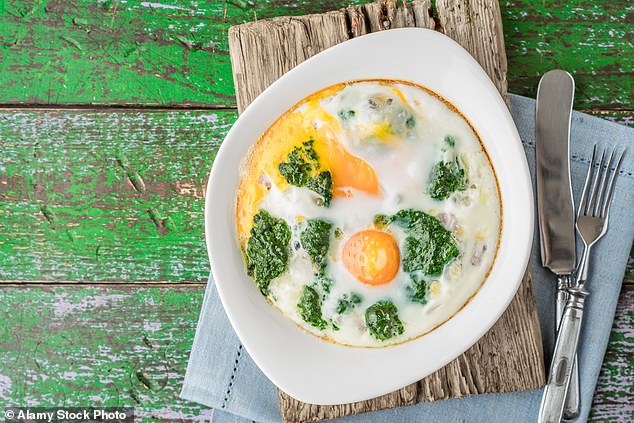 Add the spinach and season with salt and pepper, then mix (343 calories per serving)

Heat oven to 200C/Fan 180C/GM 6. If using fresh spinach, put it in a colander, then pour over a kettle of boiling water to wilt the leaves.

Squeeze out excess water. In a large, oven-proof pan, heat the oil before frying off the spring onions for a couple of minutes until softened.

Add the spinach and season with salt and pepper, then mix. Make two small wells in the pan and crack in two eggs. Put the pan in the oven for 12-15mins, then serve with yogurt spooned on top, alongside the toast. 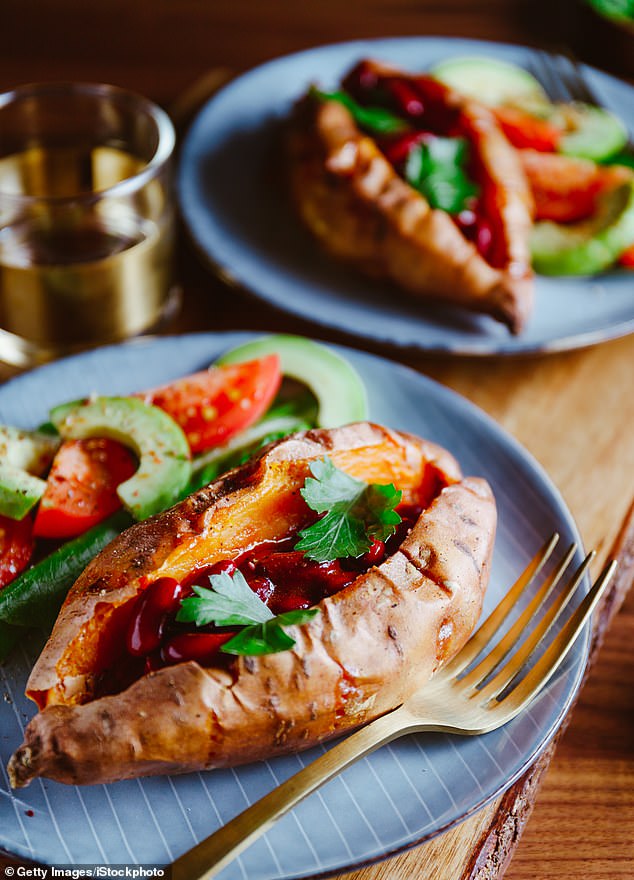 Heat the oil in a saucepan and add the garlic, paprika, cumin and chilli, if using. Cook for 1min. Add the drained beans, 50ml of water and a pinch of salt and pepper and stir thoroughly.

Cook until this is all warmed through. Remove from the heat and, just before serving, stir in the lime juice.

Cut the cooked sweet potato in half and spoon the bean mixture inside.

Meatballs and beans in tomato sauce 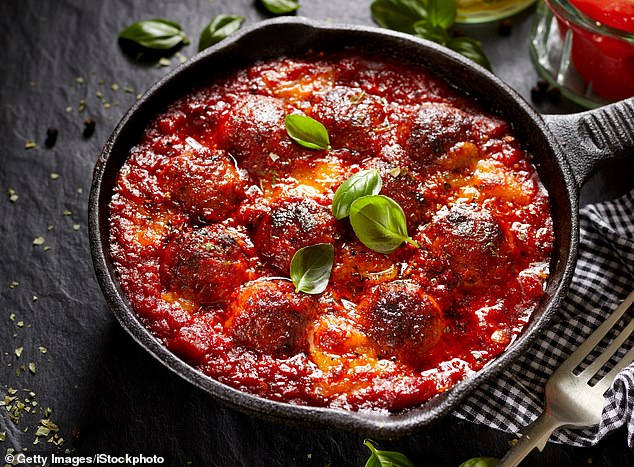 Place 4 meatballs in each bowl with sauce and serve alone, or with bread (450cal per serving)