Schools must be kept open ahead of pubs or shops in any future coronavirus lockdown, the Children’s Commissioner for England has warned.

In a major intervention, Anne Longfield said children had been treated as an ‘after-thought’ in the first lockdown and insisted they must be at the heart of future plans.

She said schools should always be the first to open and the last to close. She also declared that, if necessary, they should be prioritised over other sectors and kept open at the expense of pubs, restaurants or non-essential shops.

Mrs Longfield called for regular testing of pupils and teachers, saying this was essential in keeping schools open and preventing ‘bubbles’ or year groups being sent home after just one positive test.

In a major intervention, Anne Longfield (pictured) said children had been treated as an ‘after-thought’ in the first lockdown and insisted they must be at the heart of future plans

Boris Johnson has vowed that children will return to class on a full-time basis from next month.

But that pledge has been coming under pressure in recent days amid concern over an increase in infections and new social restrictions in the North.

At the weekend, scientists warned that pubs may have to close as a ‘trade-off’ to get all schools back.

Yesterday a major study in The Lancet medical journal warned that reopening all schools in September could lead to a devastating second wave of the virus without an improved test and trace system.

Teaching unions have also raised renewed concerns about the return of schools and called for a ‘Plan B’ if the virus is resurgent. 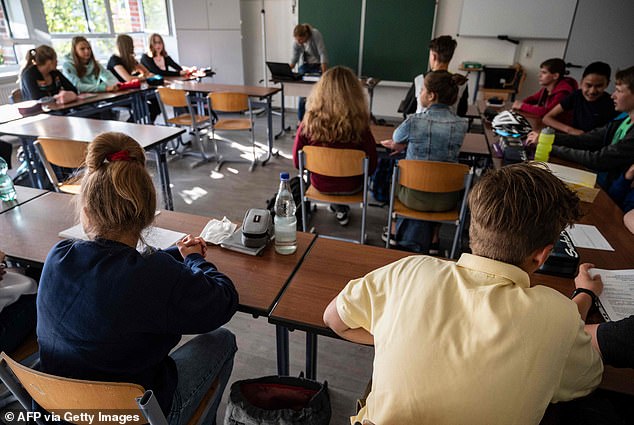 Boris Johnson has vowed that children will return to class on a full-time basis from next month. Pictured, students at Rostock, Germany on August 3

However, in a paper on future virus planning last night, Mrs Longfield insisted that keeping schools open was essential to safeguarding children’s futures.

Her briefing paper said schools should be the ‘absolute priority’, adding: ‘Education should be prioritised over other sectors – first to open, last to close.

‘When only a limited amount of social interaction is feasible, the amount accounted for by education must be protected at the expense of other sectors/activities.’

Mum, 34, DROWNS after going for a swim in rough surf with her daughter at a ...