When facing treatment for a fatal form of cancer, even the strongest among us may allow themselves a wobble. If only everyone had the counsel I did as I prepared myself for my first squirt of chemo, which I hoped would buy me a few more months.

My advice came from Jonathan Aitken, former Tory MP, now prison chaplain, and a friend of mine. 'I do hope,' said Jonathan, 'you're going to be steady on parade.'

'What on earth do you mean?' I responded. 'I'm about to go through one of the more arduous experiences around, and you want me to keep a stiff upper lip?'

'Exactly so,' he said. 'If you are upbeat, this will communicate itself to your children, who will respond by also being upbeat.

'Their demeanour will make you happier, and so you will have created a virtuous circle.' 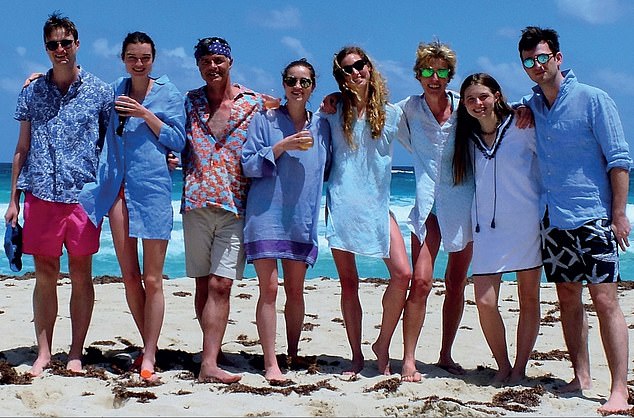 Mick May (third from left) with his children (left to right) Ivo, Honor, India-Rose, Lara, wife Jill, Daisy and Paddy

This was possibly the finest non-medical advice I received. Goodness knows, I needed it.

In May 2013, aged 54, I was diagnosed with mesothelioma — a word I had never previously heard. And, as my notes of that year will bear witness, one whose spelling alone defeated me for a month or so. But it was a word I was to hear increasingly, especially prefaced with another: 'malignant'.

So here's a quick and necessarily black-and-white explanation of what this vicious beast is. A fatal cancer, the median life expectancy from diagnosis is around ten months. It is the only form of cancer solely caused by exposure to asbestos, most usually in the workplace.

The disease principally affects the pleura (the external lining of the lung), and less often the peritoneum (the lining of the digestive tract).

Many cases are diagnosed at an advanced stage as symptoms (for example, breathing trouble and chest pains) are non-specific and appear late on. Sufferers tend to die a painful death, lungs constricted by an ever-hardening lining.

I'd been feeling a bit out of breath so went to see my GP. An X-ray revealed a cloudy area; more tests confirmed it was mesothelioma.

From the moment I was diagnosed, doctors gently emphasised the gravity of my condition. 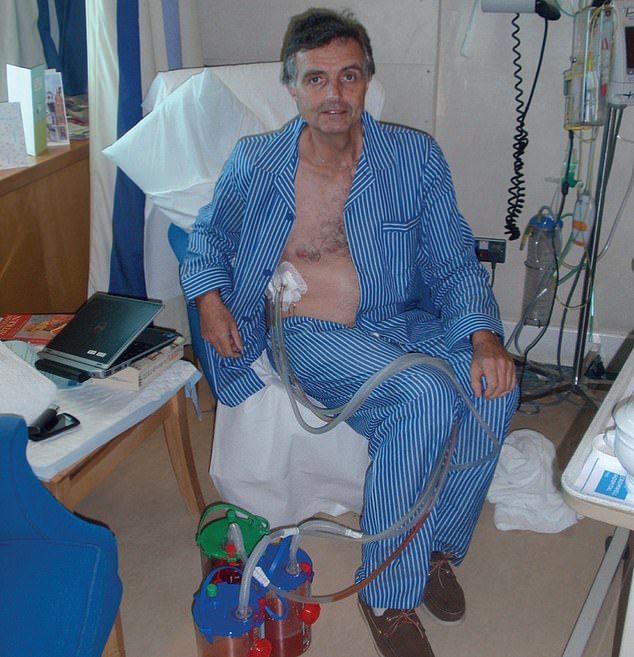 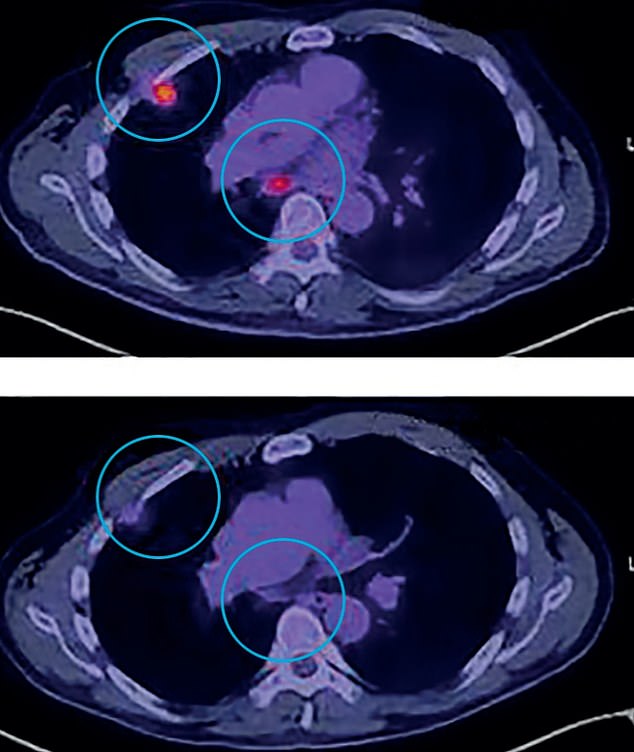 The father-of-six became the first mesothelioma patient worldwide to receive a cancer drug called vismodegib. Pictured: Active tumours in his lungs before vismodegib (top) and scans after being given the drug (bottom) 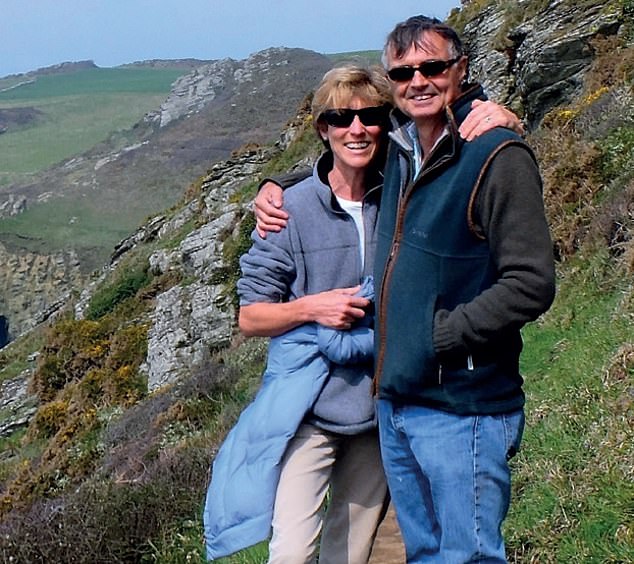 So how am I still here, seven years on? As with the adjective 'iconic', 'miraculous', too, is vastly overused. In the process, it risks being cheapened. But when you've been told several times that you are 'a medical miracle', you are forced to ponder a little.

As my oncologist, Professor Sanjay Popat [of the Royal Marsden Hospital in London] recently surmised: 'By all predictions, Mick shouldn't be here. He has a terminal disease . . . yet he continues to thrive.'

This is down to me becoming the first mesothelioma patient worldwide to receive a cancer drug called vismodegib. Indeed, quite possibly I was the first within the much wider cohort of lung cancer patients to do so.

Truly, I represented a one-man trial. And because I was the only data point, no one could predict what would happen.

All this, though, happened in the years after my diagnosis. Many hard times came in between.

In the weeks immediately after I found out I had mesothelioma, each morning I would wake up certain I had just had a nightmare. For a blissful five minutes, my normal life opened up before me. Then, with a dull thump, my new and real world returned.

Yet the optimism of my surgeon, Professor Loic Lang-Lazdunski, appeared boundless. I had a kind of mesothelioma which, he advised, was the best to treat — epitheloid mesothelioma is slower to spread.

Plus, I was young and fit, and my condition was operable. I was going to have something called a 'radical pleurectomy and decortication'.

In layman's terms, Loic [who treated me at the private Cromwell Hospital in London] was going to scrape all the cancer off the pleura, the gap between my lungs and my ribcage. This radically altered things, I was advised.

First, it would offer me remission: there would literally be no cancer in my body for a time.

It would come back, though — that much I knew. However, the statistics were impressive: 60 per cent of Loic's patients lived for three years or more and 40 per cent for five years plus.

I'm having that, I thought.

As the operation loomed closer, I tried to view it as my recent male relatives must have anticipated military action — my father, grandfather, great uncle and uncle each won the Military Cross — calling it 'my own personal Capuzzo'.

Capuzzo is a fort near the Libyan–Egyptian border, which played a significant role in the Western Desert campaign of the Second World War.

It is where my father, Captain [Peter] 'Crackers' May, won his Military Cross in 1941, leading his men from the Durham Light Infantry in a heroic charge.

At his funeral, one of his former soldiers spoke to me glowingly of the courage and sang-froid Dad had displayed that day; looking back on that conversation, I decided that it was these virtues to which I aspired. 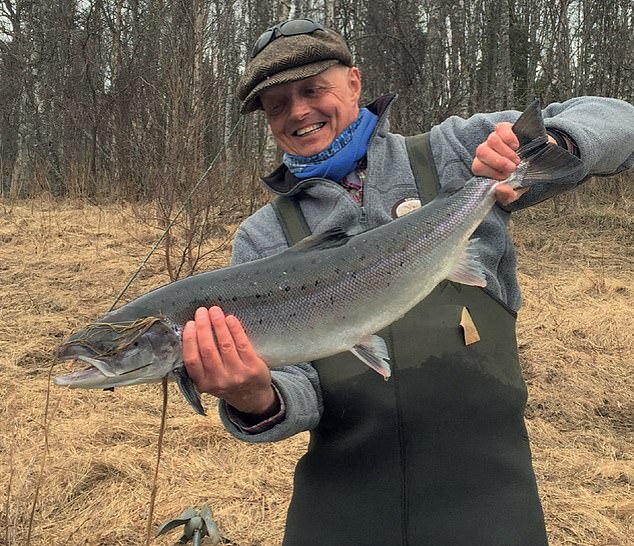 'People have asked me about the impact of my illness on domestic life. In all probability, that impact fell most directly on the children, and every so often the hurt and confusion came through', writes Mr May

This did not mean I was always calm. My emotions would boil over in anger and frustration. Why was this happening to me?

For while the UK has the highest incidence of mesothelioma per head of population in the world, with 2,500 deaths a year, of which 84 per cent are men, a reflection of more traditional working patterns in the heavy industrial sectors of three or four decades ago, I had been no manual labourer.

At age 22, I joined a merchant bank and had worked in the City for the next two decades, including an office in Fenchurch Street.

On little more than a whim, not long after I was diagnosed, I typed into Google 'Fenchurch Street asbestos' and found an article that reported it had taken 17 months to remove all the asbestos from my old office when, in the early 2000s, they had pulled it down to make way for another glass and concrete tower block.

My legal team subsequently discovered that, during a renovation, there had been asbestos leaks on floors close to where I worked and also in the staircases, which I had used extensively over many years.

In the days immediately before my operation, I had an overwhelming feeling of 'going over the top' to face the enemy. Even as I write this, I blanch a little at how over-dramatic I was probably being.

The surgery itself was deemed a triumph. And so began the drudgery of recovery — something for which I was ill-suited. The pain was all-encompassing and ferocious. To cough was agony, to laugh overwhelming.

Then came chemotherapy. I thought that the impact would be immediate, so I repaired to bed on arrival back home. Much to my surprise, two hours later I felt fine.

It was only three days later, when I felt incapable of finishing my martini, that the toxic impact began to take its toll. I finished this first bout of chemo (I was to have three in all, over three years) in December 2013. It had been very much my annus horribilis.

The next two years saw quarterly scans, meeting with my oncologist, Sanjay, afterwards.

In my life, I have felt before the sense of numb dread one experiences prior to an event that you know is going to be painful and cannot be avoided, but nothing ever came close to the dry mouth and dull thump of the heart that was my lot in the waiting room of the clinic at the Marsden (my treatment throughout has been private — the Marsden offers both private and state provision).

I knew the fateful day when we would discover the cancer had returned would arrive at some point. In late 2015, the doctors told me there was 'an uptick in activity' around my tumour.

And so there came another dose of chemo in 2016 — my last, advised the doctors. Now, we were urgently casting around for other options.

I was enrolled on an immunotherapy trial — where your natural defences are encouraged to fight cancer with various biological substances — later that year in Lille.