Repeatedly refusing to wear a face mask could lead to a fine of up to £3,200, Boris Johnson announced last night.

At present those who do not cover their faces in shops or on public transport can be ordered to pay a penalty of £100 – or £50 if they pay within a fortnight.

But the Prime Minister said those caught without a mask for a second time will now face a fine of £200, with the amount doubling on every repeat offence to a maximum of £3,200.

As part of stricter rules brought in to prevent a second wave of coronavirus, organisers of illegal raves will face fines of up to £10,000. The tough fines will apply to anyone organising unlawful gatherings of more than 30 people.

At the same time, however, the Prime Minister said bowling alleys, skating rinks and casinos would be allowed to open and Beauty salons, tattoo studios, spas and barbers can offer close contact services.

wedding receptions for up to 30 people will resume and indoor performances with socially distanced audiences will recommence. 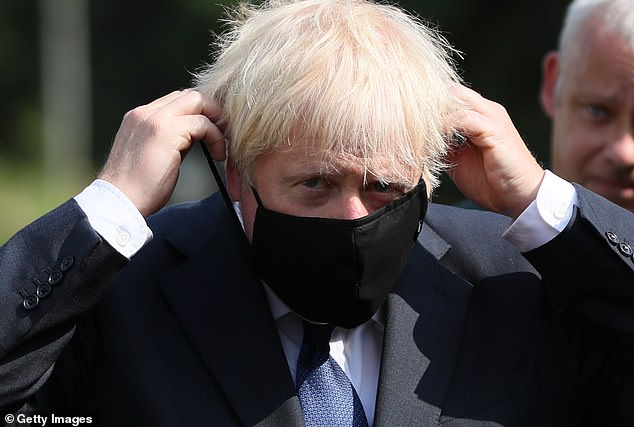 The Prime Minister said those caught without a mask for a second time will now face a fine of £200, with the amount doubling on every repeat offence to a maximum of £3,200

Mr Johnson said: 'Most people in this country are following the rules and doing their bit to control the virus, but we must remain focused and we cannot be complacent.

'That is why we are strengthening the enforcement powers available to use against those who repeatedly flout the rules.

'At every stage I have said our plan to reopen society and the economy is conditional and that it relies on continued progress against the virus. Today, we are able to announce some further changes which will allow more people to return to work and the public to get back to more of the things they have missed.

'However, as I have always said, we will not hesitate to put on the brakes if required, or to continue to implement local measures to help to control the spread of the virus.' Masks were made compulsory on public transport on June 15 and in shop on June 24.

But it emerged at the weekend that just 33 fines have been issued since June 15. This was despite the fact that police had stopped almost 30,000 people to warn them for not covering their faces. 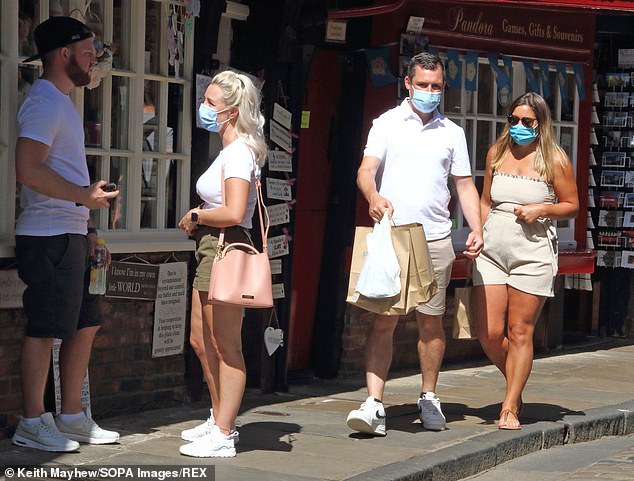 At present those who do not cover their faces in shops or on public transport can be ordered to pay a penalty of £100 – or £50 if they pay within a fortnight (pictured: Yorkshire, August 13) 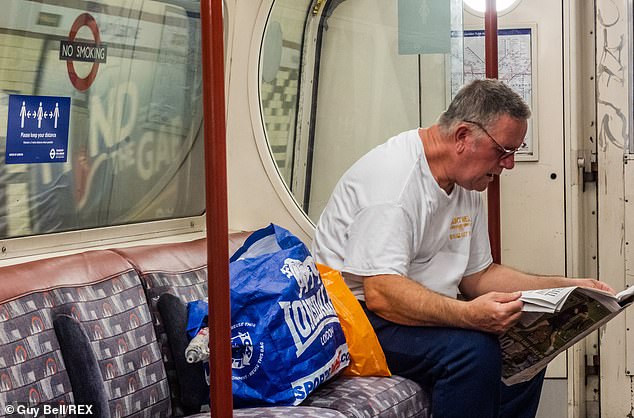 At present those who do not cover their faces in shops or on public transport can be ordered to pay a penalty of £100 – or £50 if they pay within a fortnight (pictured: A commuter on The Underground)

Masks are not compulsory for children under 11, people with breathing difficulties, people with any disability that makes it difficult for them to wear or remove a face covering and those travelling with or assisting somebody who relies on lip reading.

Transport Secretary Grant Shapps said: 'We introduced mandatory face coverings on public transport to protect people and stop coronavirus spreading. I'm grateful to all those who have complied, and of course many people have legitimate reasons not to wear face coverings – but for those who aren't exempt, there is no excuse. That's why we must get tougher on repeat offenders.

More than 3million people in England have had coronavirus – 12 times higher than the number of confirmed cases, according to major study.

A mass home testing programme, led by Imperial College London, found that just under 6 per cent of the country's population – around 3.4million – had antibodies to Covid-19 by mid-July.

This is compared to the Government figure of just over 270,000, who have been officially tested for the virus during the pandemic.

Those living in London, working in care homes and healthcare, living in large households and those from minority ethnic groups were most likely to have contracted the virus.

More than 100,000 volunteers took part in what was the world's largest home testing programme. It uses a drop of blood to check for antibodies.

'This new system will look to ensure everybody who is not exempt wears a face covering on public transport, continuing the public's excellent efforts in helping this country recover.'

Police forces across England and Wales have already stepped up patrols to prevent illegal gatherings in areas of concern – such as Leicester and Greater Manchester – where deployments have sometimes been larger than on New Year's Eve.

Last weekend, West Midlands Police shut down 125 parties and raves and closed a pub as part of action to stop illegal gatherings and anti-social behaviour. Home Secretary Priti Patel said: 'Coronavirus remains a real and present threat to all of us and the majority of the British public are doing the right thing. I will not stand by and see these sacrifices undermined by a small minority of senseless individuals.

'These measures send a clear message – if you don't cooperate with the police and if you put our health at risk, action will follow.'

n Wearing face coverings in public could help cut the number of Covid-19 deaths by 5 per cent, researchers have revealed.

Those who use even a simple cloth to shield their nose and mouth can help significantly reduce the number of deaths.

Scientists say if this was combined with handing out surgical masks to the elderly and those with symptoms, the effect could be doubled.

The study, by scientists from the Broad Institute in Massachusetts and the National Tsing Hua University in Taiwan, concluded the adoption of universal face coverings provided a 'considerable reduction' in total deaths. Surgical masks are thought to be three times more effective than homemade masks.

The number of people waiting longer than 18 weeks for planned operations and treatments was more than 1.85million in June, the highest since records began in December 2007.

More than 50,000 have been waiting for more than a year, compared to 1,613 in February. Cancer referrals are also down by a fifth on last year.

Only 48 people were treated on time in England compared to more than a thousand a month last year, NHS England figures reveal. Hospitals have been urged to try to catch up on the backlog during the summer when virus cases are lower.

Professor Neil Mortensen, President of the Royal College of Surgeons of England, said: ‘Covid has taken a wrecking ball to waiting time targets.

‘Each of these numbers represents another patient waiting in need, potentially in pain.’